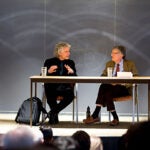 Where the research takes you

During the massive manhunt for the Boston Marathon bombers, millions of people around the world watched television news crews as they conveyed the latest bits of information from the perimeter of the search zone.

But Harvard Professor David Liu was tuned into UStream, a website where anyone can share his or her own video. Someone had pointed a camera at a scanner that was tuned to Boston police radio traffic, and was streaming the audio and video onto the Internet. It wasn’t visually interesting, but the audio during the manhunt was riveting.

While traditional media sources, at the request of police, refrained from reporting information gleaned from the scanners, more than 250,000 people worldwide were tuned in to the UStream channel, listening to police and FBI agents gathered near a boat in a Watertown backyard. The listeners heard officers discussing the suspect’s every movement, as well as talk of flashbang grenades, the boat’s 40-gallon fuel tank, where to focus a helicopter’s spotlight, and when to bring in the negotiation team.

To Liu, the lag time for information from traditional media compared with the timeliness of information from UStream, Twitter, and even emails from his students was striking. Liu also noted that repeated requests by the Boston Police Department that the public not tweet scanner traffic were ignored by many UStream listeners.

Liu, a chemistry professor who advises the federal government on science and technology through the JASON advisory group, is still processing what happened last week. But like many observers interested in the continuing evolution of information technology, he has the sense that he witnessed something new.

Melded in a unique way

While cellphone cameras, the Internet, texting, and Twitter have all been around, they seem to have melded in a unique way under the pressure of extreme events and intense, widespread public interest.

To Judith Donath, a faculty fellow at Harvard Law School’s Berkman Center for Internet and Society, Friday’s regional lockdown had one clear result: the creation of a widespread, unified community during an event that, not too long ago, would have left many feeling alone, isolated, and more than a little worried.

“For something that would be very isolating, it became very much like sitting around a table talking with each other,” Donath said. “The experience of people being stuck in their homes was very different because of social media. To some extent people felt like ‘we’re doing this together, and it’s a sensible thing.’”

David Weinberger, senior researcher at the Berkman Center and co-director of the Harvard Law Library Digital Lab, agreed that the second screen made all the difference. While CNN’s 24-hour news programming has been around for decades, he’s willing to bet that many people were watching the television programming Friday on a laptop, tablet, or smartphone, communicating with family and friends, offering commentary, and pointing out errors or bad judgment on social media.

Weinberger said that at one point CNN reported that the FBI had asked it not to tell viewers the address where the broadcast originated, but someone quickly pointed out that the address was plainly visible on the building in the shot.

That second screen also allowed viewers to amend TV news programming, giving them access to mountains of information beyond the broadcast.

“Fifteen years ago, we had to wait for CNN to explain where Chechnya is. With the second screen, we have the ability to know immediately,” Weinberger said.

To Weinberger, the brave new information world had an impact right from the start. Posts began to flow over Twitter within seconds of the first explosion and, once the investigation and search for assailants started, there was little doubt their images would be in someone’s camera.

“With the presence of cellphone cameras, this was such an incredibly highly recorded event,” Weinberger said. “Every conceivable angle and every conceivable second is recorded by someone. We’ve never had such coverage.”

Weinberger drew a parallel to another tragic, public event: the 1963 assassination of President John F. Kennedy, which was documented by a handful of private individuals shooting movies, the most famous of which is the Zapruder film, but had nowhere near the coverage such an event would have today.

“When you have ubiquitous coverage that gets distributed universally [over the Internet], you have the possibility of types of knowledge that weren’t possible before,” Weinberger said.

Within three days, law enforcement released photos of the suspects, touching off efforts to “crowdsource” their identification by using the Internet to fuel a massive examination of the images. Weinberger described it as an enormous game of “Where’s Waldo?” that created a list of people “suspected of being suspects.”

In this case, the efforts, two of which were on Reddit and 4chan, failed, and caused a lot of angst among people wrongly identified as suspects, Weinberger said.

“People whose faces were circled became quite concerned,” Weinberger said. “In this case, it didn’t work. But one of the things we learned is that we don’t understand the power of having a lot of people working a little bit on a problem. We keep being surprised by it.”

The entire region was surprised by Friday’s lockdown, which in an earlier era might not have worked as well. TV news broadcasts and phone calls to area residents have long been possible, but today the chances of someone leaving the house before encountering a news report, email, text message, Facebook post, or some other kind of communication are dramatically smaller.

“The information technologies we have access to today, in my opinion, increased the effectiveness of a short-notice, dramatic change in the status of the city,” Liu said, adding that on Friday morning his cable television box went out, denying him the news to which he normally awakens. “I woke up to a black screen instead of the morning news, checked my phone for text messages and e-mail, and got many pieces of important advice to stay home.”

Broadened the sense of community

While the presence of social media transformed the experience of people locked down at home, it also broadened the sense of community far beyond the Boston area, Donath said. Startling news in a community like Cambridge, with institutions that draw people from around the world, might naturally generate interest from former students and visitors. But Donath said it seemed that something deeper was going on. It’s a different thing for a man in Paris to watch television news because a former roommate lives in Cambridge than it is for that same man to watch the news, read his roommate’s real-time tweets, and email him.

“I’ve been getting calls from people I hadn’t heard from in years,” Donath said. “It’s the ability of people in California and France to think, ‘I’m one step from this because my college roommate is there, and I can see his or her Twitter feed.’”

Donath said she’s curious about the root of what is being enabled and magnified by technology: the human fascination with events like those that unfolded here even when those events are physically distant.

She found herself glued to Twitter and Facebook for 12 hours even though she had a major project due — but she could be excused because events were unfolding in the streets around her. She found people in Los Angeles and Ohio doing the same thing, even when they didn’t have friends or family here.

“It’s not just that people wanted information, they wanted it as fast as it is coming out,” Donath said. “What is it in our psyche that’s so riveted [by] getting that next piece of information?”

The downside of getting information as fast as it becomes available, of course, is that sometimes it’s wrong. Twitter feeds Monday were like a game of telephone, where tweeters’ assumptions and errors changed the information as it flowed, Liu said. He watched in real time as a fire at the John F. Kennedy Library in Boston became a nonexistent bomb at the Harvard Kennedy School, and as the library’s “bomb,” which would have been the third of the day, became three. In the end, the fire was an accident, and there were no bombs.

The mainstream media wasn’t guiltless, either, authoring reports of arrests that didn’t happen and describing suspects who didn’t exist.

“One of the big take-home lessons is that the ability of information to spread incredibly quickly brings both promise and peril,” Liu said.