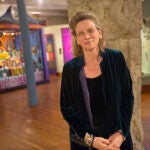 The power of dreams

In book talk, Lepore explains her attraction to subjects that no one has covered

When Jill Lepore receives an assignment, she rarely ever follows it. This may seem off for a Harvard professor who routinely doles out assignments to students. But Lepore, an accomplished author of several books and a writer for The New Yorker, explained that she doesn’t simply disregard the assignment, it’s just that her natural curiosity and research expertise often leads her in other directions.

“No matter what I am asked to write about, I try to find an original story to tell that hasn’t been told before, and that involves, for me, the fun of archival discovery,” said Lepore. “And it is also kind of a point of professional pride, thinking that there has to be something in there that no one has ever found before.”

Lepore spoke to a packed house in the Widener Library rotunda, delivering the third and final installment in Harvard College Dean Evelynn M. Hammonds’ Book Talk Series. The series was developed in coordination with the Undergraduate Council to allow students to further engage with faculty outside of the classroom and other traditional academic settings.

“This is such a beautiful space here in Widener Library and such an extraordinary place to have these kinds of discussions that bring together students and staff to talk with members of our distinguished faculty,” said Hammonds, who is the Barbara Gutmann Rosenkrantz Professor of the History of Science and of African and African American Studies.

Lepore’s latest book, “The Mansion of Happiness: A History of Life and Death” is a collection of essays that examine society’s ideas about the subject. In an essay called “The Lion and the Mouse,” Lepore explores the history of the attempt to ban E.B. White’s “Stuart Little.” The start of that idea came when Lepore was asked to review a book about the history of children’s literature. In reading the book, Lepore said she came across a “throwaway remark” about the banning of “Stuart Little.”

“That just stopped me in my tracks. Why was ‘Stuart Little’ banned. He’s this little mouse that drives a little car?” Lepore said. “Then it dawned on me that the author of this book that I was supposed to be reviewing had no idea ‘Stuart Little’ was banned, and I became obsessed with finding out why ‘Stuart Little’ was so controversial.”

Lepore told the 60 students that she searched archives and libraries looking for the answer. When she found it, the result was an essay discussing White and Anne Carroll Moore, who founded the children’s reading room in the New York Public Library, and their differing views on children’s literature. (Moore believed that children should be sheltered and White believed that children can handle more than adults give them credit for.)

“One way to read ‘Stuart Little’ is as an indictment of both the childishness of children’s literature and the juvenilization of American culture,” Lepore said.

Those in attendance appreciated Lepore’s insights.

“I am so glad to have the opportunity to engage with a faculty member like this outside of the classroom,” said Jonathan Jeffrey ’16, as he waited his turn to ask a question. “And I really enjoyed the way she presented the material in a light manner, which you may not typically find in a classroom setting.”

Previous series speakers were Jennifer Hochschild, Henry LaBarre Jayne Professor of Government and professor of African and African American studies, and John Dowling, the Llura and Gordon Gund Professor of Neuroscience and professor of ophthalmology. In addition to the book talks, Hammonds has opened her home to undergraduates for a series of fireside chats, again developed with the Undergraduate Council, featuring professors Henry Lewis Gates Jr. and Matthew Nock.