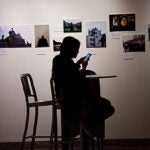 SHANGHAI — A manmade stream that draws from Shanghai’s Huangpu River takes in water so polluted it shouldn’t be touched. The stream slows the water, aerates it, and filters it through vegetation, until it emerges clean enough that people can swim in it.

The project, called Houtan Park, runs a mile along the riverbank through what was once an urban brownfield, a former industrial site and scar on the urban landscape that is similar to many others in cities around the world.

Yu, who leads a team that teaches an annual GSD design studio focusing on the problems presented by China’s rapid urbanization, espouses a philosophy that would have planners consider the environment first.

His environmental bent extends beyond today’s drumbeat to protect nature to encompass a more utilitarian focus. Undisturbed, nature provides many services, he says, and it only makes sense to appreciate what nature already gives us and encompass those factors into design before deciding what to change.

This is a break from traditional design, which can obliterate the natural world and then be forced to add back environmental services such as storm water drainage and erosion control by building more expensive, manmade systems. By considering nature first, Yu believes, not only can some of those systems be provided more cheaply, but in a more environmentally friendly fashion as well.

In a book published last year on Yu’s work, author William Saunders called Yu “a major (if not the major) progressive force in contemporary landscape architecture,” continuing, “He addresses the greatest need of our time: transforming human interaction with the Earth from something suicidally indifferent to natural forces into something that responds to those forces with respect and cooperation.”

The approach taken at Houtan Park, for example, uses natural processes to clean water so polluted it is unsafe for swimming and unable to support aquatic life. By the time the water filters its way through environmentally sensitive Houtan Park, however, it has improved from a level-five designation to a level-three — still not drinkable, but safe for swimming and for watering plants.

The park, designed through Yu’s firm Turenscape, is a model for a vast nation where 75 percent of the surface water is polluted.

“This is only a demonstration,” Yu said. “A park cannot only be beautiful, it can be functional. … We should consider the landscape as infrastructure that can provide free services.”

Stephen Ervin, the GSD’s assistant dean for information technology, taught Yu in the early ’90s and now is part of the team teaching the design studio with Yu. Since Yu is not resident on campus during the semester and has duties at Peking University, the team approach is critical to the studio’s success. In addition to Yu and Ervin, the studio includes Adrian Blackwell, visiting assistant professor of landscape architecture and urban planning and design. Yu visits several times a semester, and keeps in touch electronically at other times. He also leads an annual field trip of students from his GSD studio and from Peking University.

In past years, the studios have tackled design problems near Beijing stemming from the city’s rapid growth. At the end of each semester, the students’ ideas are presented to city leaders, though Ervin stressed that the presentations are a result of an academic exercise emphasizing visionary and out-of-the-box ideas, not a contracted service, and so they may or may not contain immediately useful elements. This year, the dozen students in the class joined Yu and Peking University students in Guangzhou, a city of 13 million on the Pearl River.

Once there, students toured an ancient, 3,000-acre orchard that has survived urbanization and whose future is being considered by city leaders.

“Students’ proposals in these studios have to consider and integrate a huge range of factors, just as Yu’s professional work does, from the form of urban buildings and transportation systems to natural hydrological systems, cultural practices, and aesthetics,” Ervin said. “These are impossibly complicated problems to which there is no right answer.”

Heather Dunbar, a student in the studio, said she wasn’t prepared for the sheer scale of Guangzhou, though she had a sense that she might have been looking at an example of what a more urbanized world will one day look like.

“We just have no idea of the scale of urbanism” there, Dunbar said. “This area is one of the most urbanized areas in the world. This is the future.”

Mike O’Neill, another student in the class, is drafting a proposal to preserve the green space but increase population density around it, using the orchard as a resource to relieve the pressures of urban life for nearby residents. He cited Yu’s philosophy in saying city leaders should consider the environmental services the orchard already provides before they move ahead with planning.

“We think there’s a lot of potential. It’s a resource Guangzhou should not squander,” O’Neill said.