Where the research takes you 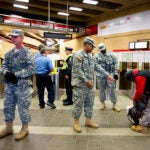 How the attack affects our lives

On any given day, informal conversations between public intellectuals are taking place on the Harvard campus — but often behind closed doors.

Those doors were flung open Tuesday as Steven Pinker, Johnstone Family Professor in the Department of Psychology, and Howard Gardner, John H. and Elisabeth A. Hobbs Professor of Cognition and Education at the Harvard Graduate School of Education (HGSE), met at the Geological Lecture Hall to interview each other about their research, influences, and interests. The forum was coordinated by the Mind/Brain/Behavior Interfaculty Initiative.

Pinker, whose work explores language, the evolution of the mind, and the decline of violence in books such as “The Language Instinct” (1994), “How the Mind Works” (1997), and “The Better Angels of Our Nature” (2011), said that though he encountered several schools of thought on psychology early in his career — including research by Noam Chomsky and B.F. Skinner — he resisted becoming a disciple or advocate of any.

“I’m more of a magpie, trying to select ideas that I think are worth defending,” he said. “Science, as an enterprise, has got to pick good ideas from a number of sources and let the phenomena lead the way.”

Asked by Gardner what had surprised him most about his career, Pinker said he hadn’t expected to cover such a variety of topics.

“I thought that I would study language acquisition and visual cognition, and that would keep me busy indefinitely,” he said. “But I think I worked so hard to come up with a coherent theory of something that it’s then my statement, and then I’m kind of done. Then I want to find something new to synthesize.”

His latest investigation was into violence over time, work detailed in “The Better Angels of Our Nature.”

“It’s quite the opposite of the impression you would get from consuming news, which is becoming better and better at reporting violence,” Pinker said. “But in reality, violence is going down.

“That’s a meaty topic for a psychologist. If, as I do, you believe in such a thing as human nature, you must try to account for both the prevalence of violence of earlier periods and the fact that, if there are enough degrees of freedom and social organization — then the rates cannot just go down, but go way down.”

“If you want to understand phenomena, you should understand it in its most developed, fullest form,” Gardner said, adding that his favorite research experience was watching old films of Martha Graham at the Lincoln Center archives for his book “Creating Minds” (1993).

Gardner’s process is to take “a modest number of people — say 10 creators in detail and 10 leaders in detail,” and then examine that group for similarities, to see what kinds of patterns emerge.

Several of the performers and thinkers he has studied were born “in the sticks,” but moved to big cities in their late adolescence, and there began to encounter and develop new ideas. Gardner initially thought that this trend indicated large urban areas could be pivotal in creative evolution.

But a discussion with a peer brought up an example that Gardner first dismissed as an exception: Ludwig Wittgenstein, an Austrian-British philosopher who grew up in privilege in Vienna. When Gardner realized that Wittgenstein left home to study at Cambridge, and then spent a decade in a small village in Norway, he revised his premise.

“Maybe the generalization isn’t that you have to grow up in the sticks and then move to the city, but rather than you have to go to a very different kind of place if you want to think in a new kind of way,” he said.

“That kind of game is fun, because you start out with someone you’re interested in, you look at patterns, you see whether those patterns apply to other people, and then others can test your theory and see if it holds up.”