The seeds of anthropology 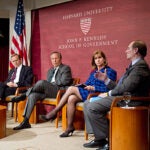 JINAN, China — On the 16th floor of Shandong University’s tallest building, more than 70 students filled a conference room, some carrying in chairs from the hallway to hear a Harvard professor talk about a subject relatively new to the university: anthropology.

Michael Herzfeld, Ernest E. Monrad Professor of the Social Sciences at Harvard, urged students during the session earlier this month to ask questions and interact. He scanned the room, remarking, “I didn’t expect such a crowd,” and then launched into a discussion of cultural heritage and identity.

Herzfeld’s lecture was part of the six-week intensive course he taught at the university this spring as a way to bolster the fledgling Anthropology Department there.

The department was begun in 2010 by Harvard alumnus Zongze Hu, who graduated with a doctorate in anthropology in 2009. Hu has been working to raise the profile of a discipline rare in China — anthropology was once thought too “Western” and “capitalist” by government central planners, according to Hu — and that is still offered at only a handful of the nation’s more than 2,000 universities.

Jie Liu, dean of Shandong University’s School of Philosophy and Social Development, said that the new interest in anthropology comes from the realization that as China’s role on the world stage grows, so must its understanding of other cultures.

Hu, who received bachelor’s and master’s degrees in sociology from Peking University before coming to Harvard in 1999, said that while sociology helps to illuminate society, anthropology extends that understanding to a more intimate, individual level.

After getting his doctorate, Hu eventually landed a job at Shandong University, where Liu, with the support of university President Xianming Xu, agreed to develop anthropology as a discipline. The first step in 2010 was to establish an anthropology institute, which in China involves graduate study. Officials started a department a year later to educate undergraduates.

The program has eight faculty members and six students, three undergraduate and three graduate, numbers dwarfed by the crowd at Herzfeld’s lecture.

“I knew … that he was beginning to build this program and I was impressed” with the progress, Herzfeld said.

Herzfeld, who sat on Hu’s dissertation committee, agreed to teach the short course to help raise the new program’s profile. Herzfeld, a social anthropologist whose specialty is southern Europe, has taken a deeper interest in East Asia recently, establishing a research program in Thailand and supporting budding Thai studies at Harvard. He also began to study Chinese immigrants in Italy and, since he is on leave this year, decided to invest the time to both help out Hu and learn Chinese, his sixth language.

“The Chinese presence in Rome is increasingly visible,” Herzfeld said. “Fieldwork is very much a matter of listening to people and seeing what’s on their minds. I feel strongly that if you’re going to work with a group of immigrants, it is particularly important, in order to reassure people, that you talk to them in their own language.”

Through March and early April, Herzfeld taught 90-minute classes three times a week. Students seemed eager for the opportunity to take the class, though it was initially a challenge to get the kind of in-class give-and-take that characterizes U.S. college classes.

Hu is urging his anthropology students to do as Herzfeld did during his stay and learn a new language and conduct fieldwork abroad. Because of the university’s location, he seeks to make Northeast Asia, including Korea and Japan, an area of specialization.

To build a thriving anthropology community of faculty members, graduate and undergraduate students in China, his work at Shandong University has to be replicated at other universities, Hu said. Where anthropology exists in China, it is considered a secondary discipline, under the umbrella of sociology. With a strong community, particularly at China’s top institutions, it could develop into a primary discipline.

Anthropology graduate student Xinru Li, who also served as Herzfeld’s Chinese tutor, said she didn’t know what anthropology was during her undergraduate studies. But she heard Hu lecture on the subject and found it so interesting that she enrolled in the program.  “It’s amazing,” Li said.

Hu’s success is an example of the impact Harvard alumni can have in building new institutions, companies, and capacity in their homelands. Herzfeld cautioned against viewing the flow of knowledge and expertise as moving in only one direction. Harvard regularly builds its own capacity, he pointed out, by hiring the best and brightest from around the world and bringing them to Cambridge.

Herzfeld credited the other two anthropologists on Hu’s dissertation committee, Arthur Kleinman, Rabb Professor of Anthropology, and James “Woody” Watson, the Fairbank Professor of Chinese Society, emeritus, for helping Harvard to establish a strong scholarly reputation in the anthropology of China and for training Chinese doctoral students who have returned to prominent roles and built programs of their own. One of Hu’s schoolmates, Tianshu Pan, is playing a similar foundational role as Hu at Shanghai’s Fudan University, beginning a medical anthropology collaborative research center at Fudan, co-directed by Pan and Kleinman.