The price of women’s immigration 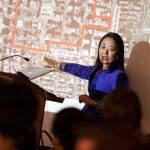 Author discusses little-known realities of mothers who come to the U.S. to find jobs, leaving their children behind

After it was over, the nightmares came: the sound of the thundering train, and the threat of gangs — including Los Zetas, Mexico’s most infamous cartel — that loomed at every turn.

Sometimes the dangers presented themselves randomly. Once, a branch swooped down. Sonia Nazario ducked just in time, but a child, farther back on the train, was whisked off, likely taken under the train’s unforgiving wheels.

Nazario was traveling from Honduras atop a speeding freighter alongside Central American migrants on the journey known as la bestia — the beast — or more grimly, perhaps more accurately, el tren de la muerte — the train of death.

In the name of research, she twice had volunteered herself for this trek, the kind that thousands of desperate migrants daily undertake, barreling through Mexico toward the United States on a train top, sleeping with one eye open, always anticipating robbery, rape, mutilation, and murder.

“The impact of immigration on the lives of women and children is rarely discussed,” said Radcliffe Dean Lizabeth Cohen as she opened the “Crossing Borders: Immigration and Gender in the Americas” conference last Thursday.

Day one of the conference began with a concert by Quetzal, a Grammy Award-winning rock band from East Los Angeles whose music takes up the social and political stories of struggling people; singer Martha Gonzalez participated in the opening night panel discussion. The conference tackled transnational identity, reproductive law, and the influence and impact of American society on immigrant children.

Nazario, who kicked off day two of the conference on Friday, is an immigrant herself. “I thought I knew something about determination,” she said, drawing from her parents’ relocations from Poland and Syria to Argentina, and from there to the United States, “but then a conversation in my kitchen with my housecleaner, Carmen, made me understand real determination.

The “Crossing Borders” conference began with a performance by Quetzal. Between sets, lead singer Martha Gonzalez participated in a dialogue with a group of scholars and critics to contextualize the performance with the themes of the conference.

“I remember one morning asking Carmen if she was thinking about having any more kids. She was normally very chatty, but when I asked her this question she went stone silent, and she explained to me that she had left four children behind in Guatemala,” recalled Nazario.

“She said she was a single mother, and her husband had left her for another woman. And she said that most days she could feed her kids once, maybe twice, and at night her children cried for hunger, and she had nothing to give them. She’d coax her kids to roll over in bed at night and she’d tell them, ‘Sleep face down so your stomach doesn’t growl so much.’ She told me how she left these kids with her grandmother while she came to work in Los Angeles, and she told me that she hadn’t seen these children in 12 years.

“Imagine not seeing your children for that period of time. She said her youngest daughter was a year old — still breastfeeding — when Carmen walked away from her. I remember being stunned by what she was telling me. Why are women willing to go 10,000 miles away from their home, not knowing when or if they would see their children again? And also, I had been taught, weren’t immigrants overwhelmingly men?”

Fifty-one percent of new immigrants to the United States are women and children, not men, said Nazario. They are part of the largest wave of immigration here since 1990, and many of the women have made the painful decision to leave their children for a train ride with no guarantees and a chance to make a better life for their families. A study by the University of Southern California estimates that four out of every five live-in nannies has a child left behind in home countries.

Nazario visited these women in their homes across the United States — including the mother of Enrique, the subject of Nazario’s book “Enrique’s Journey”; the woman had relocated to North Carolina. “A lot of these women were coming here and taking care of other people’s children, but they told me they were not there to see their children take their first steps, or hear their first words, or be there for their quinceañera,” she said.

The consequences of a mother’s departure and women’s immigration are widespread, noted Nazario. Many kids, like Enrique, desperate to know if his mother really loved them, turn to drugs, develop emotional and developmental problems, and end up hating their mothers for leaving.

There are, of course, psychological repercussions for the 11 million undocumented immigrants living in the United States and contending with assimilation and the ongoing uncertainty about immigration reform.

“Americans in general are quite ambivalent about immigration,” said Mary C. Waters, the conference chair and the M.E. Zukerman Professor of Sociology.

“We’re quite proud of our immigrant ancestors, and quite proud of ourselves as a nation of immigrants, but quite worried about the new immigrants who are always arriving. I think that ambivalence runs deep in our society … Right now we’re at that pivotal crossroads. There are 11 million undocumented immigrants in the U.S. That is about the same number of African-Americans who lived in the South under Jim Crow racism before the Civil Rights Movement. These 11 million undocumented people have virtually no rights and live in constant fear of deportation, of their families being torn apart, and they are part of our society in almost every way except for having the civil rights that we all share.”

The conference was held in conjunction with a photographic exhibit, “Crossing Borders Images.” The exhibit is on view through Friday.