The power of dreams 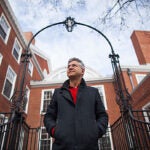 Borders, books, and the Balkans

The modern West tends to dismiss them, perhaps missing a lesson from the ancients

After Trisha Coburn’s doctor told her she was in good health, Coburn said she had a dream in which a disembodied voice told her to “look deeper.” Fearful, the 46-year-old Coburn returned to her doctor and asked him to look into the deepest part of her body: her colon. She said the skeptical doctor’s examination detected colon cancer, treatable only because it had been detected early.

Kimberley C. Patton, professor of the comparative and historical study of religion at Harvard Divinity School, relayed that story to make a larger point. Patton describes dreams as “a language of enigmatic parable” that Western culture generally prefers to dismiss. “There’s a devaluation of dreams in the West,” said Patton, something the ancients would have found incomprehensible.

Speaking at the Peabody Museum of Archaeology and Ethnography on April 5, she offered a wide-ranging, provocative, 75-minute talk, “Divination Through the History of Dreaming,” that moved from antiquity to the present. For the ancients, Patton noted, dreams were potentially divinely sent messages, fraught with meaning about the future, and having the potential to heal or offer solutions to life’s biggest problems.

Patton also addressed contemporary, Western views of dreaming from the likes of psychoanalysts Sigmund Freud and Carl Jung. “Freud argued that dreams are a kind of wish” which “reveal hidden conflicts,” said Patton. As for Jung, he believed that “dreams do have a language, but it’s scarcely logical. It makes greater use of the visual,” and thus needs interpretation.

The idea that seemed obvious to the ancient world — that dreams could foretell events — is largely dismissed today in the West, where dreams are generally viewed as “unreal, private, self-created, and limited to the dreamer’s past or present experience,” Patton said.

“Traditional religious cultures take dreaming very seriously,” Patton told the audience in Haller Lecture Hall. She showed them a variety of breathtaking artifacts, including a depiction of the mother of Buddha dreaming about the birth of her son and another, from the Italian Renaissance, of the Virgin Mary dreaming of Christ’s birth and crucifixion.

Patton described “dream incubation,” an ancient and traditional process whereby people traveled to a sacred site, engaged in preparatory rituals such as weeping or animal sacrifice, then went to sleep in order to seek help from a god like the healer Asklepios.

To illustrate the connections between dream incubation and Christian traditions, Patton showed slides of an old shrine to Asklepios in Turkey where people came to be healed in their dreams. Nearby, she said, is a Christian church dedicated to the twin physicians, St. Cosmas and St. Damian. Inside the church is a dream incubation chamber that could easily fit in at a shrine to Asklepios. Patton described the similarities as “an extraordinary continuity of tradition.”

There is obvious tension between polytheistic and monotheistic tradition regarding dreams: For many years, going to a holy site and asking for divine intervention through dream incubation meant “risk[ing] a lapse into polytheism” or inviting accusations of consorting with false prophets. Patton said the interpretation of dreams nonetheless plays an important role in Judeo-Christianity. She pointed to Joseph, “a prophetic dreamer” who was called upon to explain the pharaoh’s nighttime visions, and Daniel, who interpreted Nebuchadnezzar’s dream about a massive gold statue. Suspect or not, dreams and their interpretations are present in many places in the Bible.

Patton displayed art and artifacts from Native American, Hindu, and other traditions that value dreams for foretelling the future, healing, and more. At one archaeological site in Turkey, people slept on dirt floors under which their ancestors were buried, and believed their dreams were a kind of communion with the wisdom of the dead, she said.

With an image of a candle on a screen behind her, Patton closed her lecture by describing a final dream of a dying woman who saw a candle flickering on the windowsill of her hospice room. Suddenly the flame went out, leaving the dreamer in total darkness, and afraid. A few fearful moments later, the candle re-appeared on the other side of the window with its flame flickering again, lighting up the room from the outside.