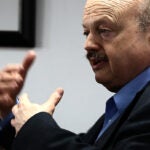 The seeds of anthropology

Slogging through muddy obstacle courses, enduring long marches while bearing heavy backpacks, and accepting regular torrents of insults may not seem like a good model for public education, but those dedicated to the motto semper fi argue that schools nonetheless can learn much from studying the Marines.

During a discussion Thursday afternoon at the Harvard Graduate School of Education (HGSE), two former members of the U.S. Marine Corps discussed how their rigorous training and military careers prepared them for their current roles in education, and how those lessons can translate more broadly to the teaching field.

Speaker Jenny DuFresne spent years as a Marine, tasked with the complex administrative duties associated with officers headed to flight school, and later as a logistics expert who moved troops and supplies at a moment’s notice. After her active service, DuFresne worked in the nonprofit and corporate sectors. Then one day she found herself wondering where she could use her experience to “really do some good?”

She discovered her answer in public education.

A 1999 HGSE graduate, DuFresne now heads the Septima Clark Public Charter School for boys in Washington, D.C., where she relies daily on her military experience. She said she founded the school on the fundamental Marine Corps premise of creating a highly organized structure united around a common goal.

“We have a mission statement, just as we did in the Marine Corps,” said DuFresne, adding that everybody in the school knows what it is, from her youngest students to her staff. While some might call that Draconian, DuFresne said that too often she has seen people thrown together in a school setting with little or no sense of “where we are all going.”

“We need to get these students to college,” she added, “but we don’t have a uniform way of all being on the same team to do that work.”

Panelist and former Marine officer Steve Scarfe is the assistant principal at a public high school in Illinois. The Marines’ structure, which requires constant communication across all levels of leadership, is an important concept in education as well, he said. Scarfe compared the Marines’ adherence to a uniform tradition, mission, and language to the national movement aimed at having every state adopt the same basic teaching standards in public education, known as the Common Core State Standards Initiative.

That initiative “is positive, because then we start to have an understanding, when we meet another educator, that we have some common language now to talk about things.”

In the Marine Corps, as in education, consistent management is critical, as is having leaders who know their mission and are able to adapt it to their circumstances, agreed the panelists.

“In the Marines, we train people to know their particular role, and their particular way of doing things, and to be flexible, because once you are on the ground, stuff happens,” said DuFresne. “In education, we either don’t know what those roles are, we’re missing layers of leadership, or we don’t believe that the leader is going to be there” for any significant length of time.

A commitment to excellence is another concept that the elite fighting force can contribute to educators, said Scarfe, who learned the importance of going that extra mile the hard way. While training as an officer, he told his next in command one night that he wasn’t sure he could complete a particular task because of his other responsibilities. “He looked at me like he had just found a big piece of hair in his salad,” said Scarfe. “He finally just said, ‘Lieutenant, that’s why they invented lights.’”

In the Marines, said Scarfe, if your boss has made the judgment that despite limited resources something is important and must happen, “then you need to get it done, and you need to do it well.” While there are many committed educators willing to put in extra time, Scarfe added, there are also those who “just see it as, ‘I’m by contract. I’m supposed to be here until 3:45, and my car will be started at 3:46.’”

“Excellence is who we are, as a Marine, and that starts from the (first) moment someone is yelling at you to get off the bus, get off their bus, and get your feet on their little yellow footprints,” echoed DuFresne.

In addition to providing students with solid foundations in core subjects such as English and math, educators increasingly need to help build character, something the Marine Corps does by providing its members with a strong sense of confidence and self-worth, the educators said.

“It’s obvious that a lot of kids are missing something crucial in their lives,” said Scarfe.

As students spend more and more time in school, he added, “We have to look at providing that character feedback, so they can have that confidence and self-worth.”

The moderator for the session was Andrew J. Rotherham, co-founder of Bellwether Education Partners and education columnist for Time magazine, who has also written about the topic.