Something in a name 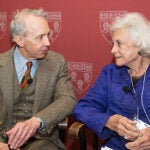 A case for yawn-free civics

As white smoke billowed from the chimney of the Sistine Chapel in Vatican City last month and a new pope was introduced to the world, millions of people scoured the Internet, eager for information that could provide insight into the makeup of the little-known Argentinian cardinal.

Soon they learned that he represented a number of firsts for the papacy, as the first Jesuit and the first pope from the Americas. But perhaps the most significant first was his seemingly simple and yet remarkably significant selection of a name.

In a groundbreaking move, said author and former Catholic priest James Carroll at Harvard Divinity School (HDS) on Tuesday, Cardinal Jorge Bergoglio became Pope Francis, in honor of St. Francis of Assisi, a lover of nature who was devoted to serving the poor.

“There is a ringing clarity to it that took the world’s breath away. It was ingenious. It was worthy of the great poet, the choice of that name,” said Carroll, who took part in a discussion titled “The Papacy and the Catholic Church” with HDS Professor Francis X. Clooney and radio host Christopher Lydon. “Saint Francis belongs to the world,” added Carroll. “This man choosing that name conveyed something nonverbally … it just rang, which in itself is so hopeful.”

Carroll and Clooney, director of the Center for the Study of World Religions, explored the significance of the selection of Bergoglio, the potential challenges he faces as the leader of the world’s 1.2 billion Catholics, and the direction the church is likely to take in the years and decades to come.

Clooney said Bergoglio’s Jesuit training would serve him well in his new role. The Jesuit ethos, said Clooney, who also belongs to the order, is focused on “finding God in all things, the ability to imagine the borderlands, to step outside, to imagine church where there is no church, to go to the farthest parts of the world, to learn the languages, to be in different cultural settings.”

Less than a month into his pontificate, Pope Francis demonstrated his commitment to those Jesuit roots. In a major break from tradition, the pope said Holy Thursday Mass not in the Basilica of St. John but at the Casal del Marmo Penitentiary Institute for Minors, where he washed the feet of a dozen young inmates, including two women and two Muslims.

The pope’s roots in the Americas not only connect him on an emotional level with a growing population of Catholics in countries beyond where the faith initially flourished, said Carroll, but also mark “a real end to exclusively European sense of the church.”

“To have a man from the colonial realm as the leader of the Catholic Church … it has resonance for us.”

But both Carroll and Clooney warned that those expecting radical change in a church led by Pope Francis would likely be disappointed. The institution, they said, remains a powerful hierarchy capable of exerting enormous pressure on people in authority. One person in Rome, they said, even a pope, will likely be able to make only incremental changes.

“Power wants to maintain itself, and if you come in and want to change things, power will try to undo you,” said Clooney. “I think [Pope Francis] has a very short period of time … to be able to sacramentally change the dynamic in the church … to open the door as John the 23rd did to real change.”

Yet Carroll is hopeful, noting that the election of this pope reminded him of the courage of Pope John XXIII, who called the Second Vatican Council.

“The most important thing that led to the revolutionary changes of the Second Vatican Council came from outside the church; it was the world forcing itself upon the church … It was the world to which the bishops were responding, and Francis has to respond to the world, and the world is ripe for change.”

Offering a broader perspective on the current makeup of the church, Carroll and Clooney both argued for a type of orthodoxy that is open to debate and discussion. The adherence to Catholic doctrine and dogma, they agreed, should be part of an ongoing conversation.

“The bottom line is you check what you believe against its real impact on human beings in the world, and doctrine that is ethically impaired needs to be changed,” said Carroll. “So ethics has a kind of precedence over theology. [It’s] the ethical test. What happens to the neighbor by what I believe? And if what happens to the neighbor is a pogrom, there must be something wrong with what I believe.”