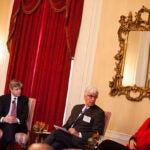 On spirituality at Harvard

Fifty years ago, when America was unquestionably a man’s world, one small but influential part of it officially opened its doors to women: the M.B.A. program at Harvard Business School (HBS).

On Thursday, about 800 of the School’s roughly 11,000 alumnae — including some of those intrepid early graduates — descended on the Allston campus for the start of the W50 Summit, two days of reflection, celebration, and brainstorming on women’s experiences at HBS and beyond.

They heard from panels of professors and alumni on everything from the benefits of “power-posing” and the perils of sleeping with your smartphone to how to earn a seat on a corporate board and make socially responsible investments. They gathered Thursday evening to watch a screening of a new documentary on the history of women at HBS, “A Woman’s Place.” And they reconnected with, as one speaker — former Time Inc. chief Ann Moore, M.B.A.’78 — called it, “the sisterhood of the traveling pantsuit.”

The anniversary has become a focal point for the School’s efforts over the past few years to address its gender disparities head-on. Women now make up 40 percent of the M.B.A. program, a figure that would have been unthinkable to the eight women who joined the program in 1963.

Three years ago, the School realized its female and international students were underperforming relative to their American male peers. As a result of a campuswide effort, HBS has closed that grade gap, a feat that drew applause in Burden Auditorium on Friday. Still, HBS Dean Nitin Nohria said, “There is so much more work to do,” especially in changing the culture of the School and the broader world.

The W50 Summit in particular was a way to reach out to the women who “have sometimes felt disenfranchised, disconnected, unwelcome at Harvard Business School,” Nohria told an audience of graduates that spanned generations. “If there is one thing that I hope this event will do, it is change the relationship that each of you has with this remarkable institution. We need you to be a part of this institution with all your heart.”

The occasion also has been “an opportunity for us to accelerate … the advancement of women leaders who make a difference in the world,” Nohria said. Indeed, the anniversary has spawned a survey of several thousand alumnae on work-life balance and a new case study on the female experience at HBS, both of which were presented at the summit.

But as Harvard President Drew Faust herself noted at the start of the conference, women are still underrepresented at the top levels of government and business, both in the United States and abroad. Only 4 percent of Fortune 500 CEOs are women; women make up 12 percent of corporate boards in America. Women account 20 percent of the makeup of parliaments worldwide, a figure that holds steady in the U.S. Senate as well. They hold just 26 percent of full professorships across the country — and fewer at HBS, where 22 percent of the faculty are women — and run less than 10 percent of America’s venture-capital-funded startups.

Given those numbers, both men and women must do more to “reshape these assumptions and attitudes” that keep women out of leadership roles, Faust said.

“Do women need to do more leaning in, or do they need to be confronted with less pushing back?” Faust said to cheers. “I believe the answer is both.”

“Keep your hand up”

In the past year, no one person has personified that debate so wholly (or with so much controversy) as Sheryl Sandberg, chief operating officer of Facebook, whose recently released book “Lean In: Women, Work, and the Will to Lead” — equal parts memoir, self-help guide, and working woman’s manifesto — has become a runaway bestseller.

In her keynote address on Friday, Sandberg, ’91, M.B.A. ’95, asked the onlookers how many had ever said aloud that they wanted to be CEO of the company they worked for. A few dozen women stood.

“You are Harvard Business School graduates,” Sandberg gently chided. “Why do you not automatically stand up?”

Too many women, she said, limit their own aspirations because they think they lack what it takes to lead, because they think blind ambition is distasteful, or because they fear they’re shortchanging their children for the sake of career advancement. But that attitude can be self-defeating, leading women to hold themselves back from promotions or drop out of the workforce altogether.

“The No. 1 person who controls whether you keep your hand up is you,” she said, urging the importance of “leaning in” to new career challenges. “The world is not going to notice when you take it down.”

Studies have shown that men are more likely to ascribe their successes to their own skills, Sandberg said, while women more often cite factors such as hard work, help from others, or luck. That gap in self-confidence starts as young as middle school, she added, but can be reversed as more and more trailblazing women pave the way — women like Sharon Baum, M.B.A. ’65, whom Sandberg singled out in the audience as one of the original eight women admitted to the School in 1963.

“The more women lead, the less we will call little girls bossy,” Sandberg said. “We have the responsibility to do this for ourselves and to teach the women around us to do this.”

As a new HBS survey shows, however, the idea that highly educated women are “opting out” is more media myth than a reality, at least among the School’s own graduates.

“Life and Leadership After HBS,” released on Thursday and discussed in a session with Professor Robin Ely, took the pulse of more than 6,000 HBS alumni to gauge and contrast men and women’s attitudes and experiences regarding career and family.

Among its more surprising findings was that less than a tenth of Generation X women (ages 31-47) and Baby Boomer women (ages 48-66) were not working at all in order to care for children.

“That number is considerably lower than just about anyone I’ve asked has imagined,” said Ely, Diane Doerge Wilson Professor of Business Administration and senior associate dean for culture and community at HBS. “And it’s certainly far lower than the media would lead us to believe.”

Over time, the media conversation about work-life balance has shifted slightly, Ely said, from discussing women’s individual choices to showing “a whole set of experiences that look less like women opting out and more like women being pushed out by organizations that demand a 24/7 work schedule, as well as women being pulled out by a culture that promulgates a compelling — some might say guilt-inducing — image of motherhood that’s hard to live up to while you’re trying to hold a job.”

After walking the audience through the results, Ely concluded that men and women alike “seem to prioritize family over work. It’s that all these other factors are also at play for women” that lead them to cut back their hours in a way that men often don’t — factors such as exclusion from informal networks in the workplace, a lack of mentors or a supportive work environment, and organizational cultures that are inhospitable to mothers.

“What gives us leverage is asking the question, ‘What needs to change in our organizations that will enable us, women and men, to honor all the things we find meaningful in our lives?’” Ely said. “The problem isn’t women’s priorities. It’s work.”

The survey’s results on work/life balance — and the difficulty of achieving an egalitarian partnership with a male spouse — didn’t surprise Anne Ristau, M.B.A. ’05, who said she and her husband have taken turns over the years, making sure each of them gets a chance to prioritize career opportunities.

“We’ve always been in that three-legged race,” said Ristau, a pregnant, working mother of two. She recently dropped down to part-time at EMC Corporation, where she works as director of channel operations and strategy, but expects to return to full-time work at some point after her third child is born.

Since graduating from HBS, “I’ve seen much more bias, whether it’s explicit or implicit, that I didn’t feel here,” Ristau said. “I think it’s impressive what the School has done so quickly, but there’s still the issue of the greater world at large and how they can impact that.”