On spirituality at Harvard 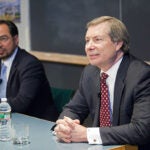 A path out of violence

In 2012, the year she came to look upon as “the year of religion,” Harvard President Drew Faust faced some challenges. She was seeking a new Pusey Minister in Memorial Church and a new dean for the Harvard Divinity School (HDS), and she was seeking a way to integrate religious studies throughout Harvard and address the “growing appetite for a discussion of values, a discussion of ethics … those vexing questions of how to live a life.”

So, following an intensive HDS search process, she named Jonathan L. Walton, the Plummer Professor of Christian Morals and professor of religion and society, to be the Pusey Minister, and David N. Hempton, the Alonzo L. McDonald Family Professor of Evangelical Theological Studies, as well as the John Lord O’Brian Professor of Divinity, to lead the Divinity faculty.

And on Friday, as part of HDS’s Leadership Day, an annual meeting of leadership-level supporters and volunteers as well as members of the Emerson Circle and the Dean’s, Leadership, and Alumni/Alumnae councils, she and Hempton sat down in Loeb House to discuss the role of religious studies and spiritual life in the 21st century — at Harvard and beyond.

For Hempton, the key is working with other Schools so that religious understanding informs law, business, public health, medicine, and, especially, conflict resolution.

As part of the Divinity faculty, he said, “It’s easy to feel that history is not moving your way,” that the West is rapidly secularizing, “and religion is yesterday’s news.”

But as a young man in Northern Ireland during the Troubles, “many of us thought we were living through Europe’s last war of religion,” and that gave him a sharper focus. “We were forced to think hard. However bad those years were, there was a deep intellectual engagement. Things mattered.

“In my years in Northern Ireland, I saw the good, the bad, and the ugly of religion; it’s all there,” he said. “I have some understanding of how these things work now, and they’re very complicated and have many layers of complexity. We need to really have a stronger sense of the deep roots of these conflicts that can’t be quickly fixed or naively fixed, but have to be engaged in a serious way.”

Bereavement can move people toward greater faith or greater doubt, and Faust, the Lincoln Professor of History, pointed out that during and after the U.S. Civil War, many people turned to the consolation of religion, situating their losses “in the context of the infinite.”

Religion, she said, helps one “understand how values enable people to get together and think through what the terrorist moments mean in a larger framework.”

Moderator Thomas Chappell, M.T.S. ’91, the president and founder of Ramblers Way Farm, quoted the apostle Paul in 1 Corinthians 8:1, which says, “Knowledge puffs up … love builds up.” How, he asked, does studying religion at Harvard build humility?

“I say this to students in the first week they’re here as freshmen: Learning requires humility,” Faust answered. “You need to bring to the project of wanting to know the knowledge that you don’t yet know, and an openness to know. That involves a certain awe, a willingness to revise. I would hope that knowledge would do the opposite of puffing up, if I may disagree with Paul. I would hope that people come with humility, and by the time they leave here they see even more reason for it, that they understand the kind of complexity David was just talking about.”

“Paul is really talking about a certain kind of knowledge,” said Hempton. “I actually have seen the kind of knowledge that puffs up, people who claim certainty or a certain pride in their achievements … but I think that historians with a deep sense of the complexities come to the conclusion that knowledge breeds humility. The past is such a cavernous place, historians are deeply aware just how difficult it is to know anything.”

“The past decade has been a tough decade for religion. Islam associated in many people’s minds with militancy, Catholicism with corruption, evangelicalism with intellectual disengagement,” he said. “There is a generation of people who are not much interested in institutional religion, even if they have wonderful ideas about what to do with their lives. I do think it’s incumbent on all of us who work around religion to take religious disenchantment seriously. … We have a responsibility to speak to our students about integrity, about the kind of faith that results in 1 Corinthians 13.”

And at Harvard, he said, he has found a humanitarian reach that is “extraordinary.”

“There’s an enormous goodness that is being done that our students absorb, and feel part of,” he said.