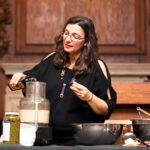 The Obama administration’s proposed cigarette tax hike takes aim at young smokers, jacking up the price of a pack to discourage the first puff taken by some 4,000 U.S. children every day, Health and Human Services Secretary Kathleen Sebelius said Monday.

Sebelius, who spoke at the Forum at Harvard School of Public Health, said that although the nation has made substantial progress in reducing tobacco use in recent decades, progress has stalled, with about 20 percent of the public still smoking.

The cigarette tax, part of President Obama’s 2014 budget, aims to discourage young smokers in particular, Sebelius said, because they are more sensitive to the price of cigarettes than adults are. Of the 4,000 children who try daily smoking, Sebelius said, about 1,000 become lifelong smokers.

“That’s one of the major issues behind lifetime health costs,” Sebelius said.

The tax plan, part of the budget that Obama will present to Congress this week, will propose using the new tax proceeds to fund early childhood education.

It is an exciting time for American health care, Sebelius said, as the most significant changes in at least the last half century are being put into place. But implementing reform is not the only thing on Health and Human Services’ plate, she pointed out. In addition to Medicare and Medicaid, the department also oversees the National Institutes of Health, which finances a large share of the world’s health research, as well as the Food and Drug Administration, whose regulatory purview reaches throughout the U.S. economy, touching goods that make up 25 cents of each dollar spent domestically.

Much of the session focused on the Affordable Care Act, which is being implemented across the country. Sebelius said she has been surprised that political attacks on the law have endured so long, continuing even after it became clear that health care reform is the law of the land, as determined by the U.S. Supreme Court and the U.S. electorate, which re-elected Obama in November. Battles have shifted from the federal to the state level as states decide whether to cooperate with the law and set up insurance exchanges or refuse and let the federal government do it.

Another surprise, Sebelius said, was the level of confusion over the phase-in of the law’s provisions. A significant number of people didn’t understand that parts of the law won’t take effect until 2014. Still, millions have benefited from provisions that have already taken effect, such as the 7 million adult children who remain on their parents’ insurance policies and tens of millions more who have benefited from the elimination of co-payments for preventive services.

Though it is still early, Sebelius said there is a shift under way from paying for medical services based on volume of care, which rewards extra treatment, toward paying for better care. Officials have also begun to see a slower rise in medical prices, though Sebelius said there hasn’t been a direct cause-and-effect relationship established between prices and the reforms.

Asked whether she had advice for someone considering whether to go into politics or to seek a leadership position in today’s highly partisan environment, Sebelius acknowledged that the 24/7 news environment, the lack of privacy, and the “constant haranguing” of politics is likely here to stay. Still, she said, every organization has its own political bent, and at least in government the process is out in the open. Aside from that, she said, it means a chance to improve people’s lives.

“I would say the rewards are huge. There’s the opportunity to really feel like you’re making a difference,” Sebelius said.