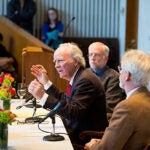 Something in a name

TOKYO — To Sakura Christmas, borders are where the action is.

They are messy places where worlds collide: people, cultures, sometimes armies. And the symbols of change that they signify tell us something important about the values of the shifting societies, about what is retained, what is lost, and how hard people fight to retain what they have. Borders also say much about the new societies that emerge from tumult.

“I’m very much interested in cultural encounters and the meetings between different sorts of people and societies,” Christmas said.  “Some of the issues I work on now — ethnic tensions, land rights, informal imperialism — still resonate today, especially in China.”

Christmas, a doctoral student from Harvard’s History Department, is wrapping up work in the archives and libraries of Tokyo and headed for 10 months of study in Inner Mongolia, an autonomous region in northern China that spans much of China’s northern border.

Christmas’ work examines a complex place at a complex time. She’s focusing on the early part of the last century, when Han Chinese migrant farmers pushed into Inner Mongolia, then only thinly occupied by Mongol herders and hunter-gatherers. The farmers’ arrival touched off a scramble for land, a situation that became more complex after 1931, when the Japanese invaded northern China as part of the imperial expansion that was prelude to World War II. The Japanese divided Inner Mongolia into two puppet states, Manchukuo and Mengjiang.

For herdsmen, farmers, and even Japanese imperialists, land was an issue, whether as a resource to farm, to graze sheep and cattle on, or to mine. Land and the policies surrounding it, Christmas decided, would provide a useful lens through which to view the region, the people, and the times.

“It sounds really boring when you say ‘land tenure,’ but it’s a reconceptualization of the understanding of land and territory,” Christmas said. “Much of my work is on … how imperialism affects the daily lives of people in this period.”

Christmas has spent a lot of time in archives and libraries in recent years. She has searched through thousands of documents, photographing or copying those she deemed important. Her research has taken her to three Japanese archives and four Japanese libraries, and has her gearing up to spend the coming months in four far-flung archives in Inner Mongolia.

In a way, Christmas has been preparing for her work her whole life. With a Japanese mother and an American father who doesn’t speak Japanese, Christmas was raised at the border of two cultures, learning to read, write, and speak Japanese at home while growing up and attending high school in North Carolina.

When she arrived at Harvard in the fall of 2003, she was hungry to learn more about Japan and East Asia. But studying Japan by itself wasn’t satisfying for her. Regular visits to her Japanese grandparents had made the country familiar to her, and not that much different from her U.S. home.

Christmas was drawn instead to the region along China’s northern border. She spent the summer after her sophomore year on a fellowship that had her drawing political cartoons — she’d always had an artistic bent — for a newspaper in Mongolia, the nation landlocked between China and Russia.

After her junior year she took a year off to study Japanese at Kyoto University on a fellowship funded by the Japanese government. Despite her informal training at home, she felt she needed to improve her Japanese reading and writing skills if she was to conduct research in the language.

On her return to Harvard, Christmas did her senior thesis on Japan-occupied Manchuria, an area in Northeast China encompassing part of Inner Mongolia.  After graduating, she spent a year teaching English in another part of China, Xinjiang, an autonomous region north of Tibet, with the nonprofit group Princeton in Asia. Christmas was there when deadly rioting broke out in the restive region, and grew concerned when some friends got caught up in it, though thankfully they were unharmed.

Mark Elliott, the Mark Schwartz Professor of Chinese and Inner Asian History, advised Christmas on her senior thesis and later became, with Associate Professor of History Ian Miller, an adviser on her doctoral thesis.

Elliott, who’s known Christmas for seven years now, described her as energetic and cheerful, a good student who works hard and takes advice, but who also has the ability to balance advice against her own instincts. After receiving her undergraduate degree, for example, Elliott knew Christmas wanted to teach for a year in China. Since she was interested in Manchuria, he suggested she go to Dalian, a port city with clean air and a fascinating colonial history, where people were known for having more liberal attitudes.

“Instead, she opted for Shihezi, a bleak oil town in northern Xinjiang, where among her colleagues at the university were Han intellectuals ‘exiled’ from teaching posts in China proper,” Elliott said. “The increased tension between Han and Uyghur populations in Xinjiang she witnessed during her stay — which ended in street violence in Urumqi in summer 2009 — made for a challenging year, to say the least. But I’m sure she learned more from those experiences, difficult as some of them were, than she would have had she chosen the more comfortable environment.”

Christmas started her doctoral work in the fall of 2009 with an idea of the time and place she wanted to study. Elliott and Miller helped her settle on land as a focus for her interest in the region.

“I could narrow down the time, and roughly the place,” Christmas said. “I knew I wanted to work on the borderlands region in China and narrowed it down to the Japanese occupation.”

In addition to Japanese imperial policies and the day-to-day use of land by herders and farmers, the emerging role of science in measuring and analyzing land is also important, Christmas said, so her work will include an examination of the role of science, as well as environmental aspects such as desertification from careless use.

“In the broadest terms, she’s bringing the history of science and environmental history together in a study of the Japanese empire and its edges,” Miller said. “We have ample studies about how empire functioned in colonial cities and so on, but before Sakura we had little sense for what the Japanese empire looked like from its edges. This is an empire that, at its peak, reached from the Aleutian Islands to Indonesia, from Pacific atolls to the steppes of Manchuria and Mongolia. It is this last area that has attracted Sakura’s attention, and it is among the least studied components of the Japanese imperium, despite its obvious strategic and economic importance.”

When asked about key moments in her work, Christmas talks about unearthing documents like the record of the 58,000 head of livestock the Manchukuo puppet government bought from Mongol herdsmen after losing a 1939 border battle with the Soviet Union. The loss shifted the border, placing the herdsmen’s winter grazing grounds in the Soviet Union. The Manchukuo government decided it was better to pay for the sheep and cattle than have people fighting over the grazing lands that remained, but Christmas said that decision ignored the central role that livestock played in the lives of traditional herdsmen.

“For me, they’re huge, but in the grand scheme of things, they’re all very small eureka moments,” Christmas said of that and other archival finds. “One thing I like about the archives instead of the libraries is that there’s a surprise every day. You have to recalibrate every day based on the documents you find that day and how they’re going to change your dissertation and the arguments you want to make.”

For example, Christmas was originally going to include a chapter on opium cultivation, but found that, because it is illegal, people didn’t want to talk about it and documents were hard to find. After turning up references to licorice extraction, she substituted licorice for opium, as the story of licorice in the region allowed her to cover much the same ground.  Licorice is found in the deep roots of the plant and its harvest, if done carelessly, can lead to desertification in a fragile, dry environment. In addition to environmental impacts, Christmas will also examine the contrast of licorice’s pre-invasion use as a traditional Chinese medicine — used in root form for upset stomachs — and the more industrial processing by Japan, which extracted the essence from the roots and shipped it for use in soy sauce and tobacco products.

As Christmas was wrapping up her Tokyo research in late February, she was looking forward to her stay in Inner Mongolia. Practical concerns were for the moment trumping worries about her research, as she still didn’t have an apartment lined up and was hoping a teacher’s apartment would become available.

While the prospect of traveling alone to a place unfamiliar to many in the United States might seem daunting to some, it was something Christmas had done before. In fact, she was anticipating getting some open time to begin writing while she waited for permission to visit archives in the regional capital of Hohhot and in the towns of Hailar, Qiqihar, and Chifeng.

“Many of these border regions [in the study area] are now settled, but there are similar issues taking place in China today,” Christmas said. “It may be the way Asia might be headed, especially if we forget the past. History is never dead.”