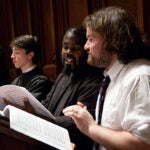 In May 2004, after 50 years at Harvard, architectural historian Eduard F. Sekler delivered his final lecture.

Last week, the venerable scholar, now in his 90s and walking with the aid of a cane, once again addressed a room full of students — some current, some familiar from his decades as a teacher.

The April 4 talk at Gund Hall was among a series of events that started last fall in honor of the Carpenter Center for the Visual Arts, which turns 50 in late May. The building is the only one in North America designed by Le Corbusier. Sekler, who arrived at Harvard in 1954 and was a full professor by 1960, was the center’s first director. (He is now the Osgood Hooker Professor of Visual Arts Emeritus and professor of architecture emeritus.)

Josep Lluís Sert (dean of the Graduate School of Design 1953-1969) persuaded Le Corbusier — still stinging from not getting the commission for the United Nations building — to design the landmark arts center for Harvard. “When it was young, it was freestanding and very new for the University,” said Sekler of the Carpenter Center.

But its presence on Quincy Street, surrounded by buildings of Harvard red brick, met with some resistance. “A lot of the traditional professors thought it was a disgrace,” he said. But putting up the controversial building filled Sekler with admiration for Harvard’s president at the time, Nathan M. Pusey. “He turned out to be a real reformer,” said Sekler, “who wanted to let the future come very directly into the University.”

Still, the Carpenter Center owes its existence to more than Pusey’s expansive liberality, the professor said. There was also the matter of the 1956 Report of the Committee on the Visual Arts at Harvard University, called “the Brown report,” after chair John Nicholas Brown. Among other things, it recommended the construction of a “Design Center” that would be both a theater and a visual arts center. In the end, the theater ended up in a separate building on Brattle Street and the Design Center — renamed the Carpenter Center — was planned for Quincy Street.

Meanwhile, another question hung over the project, he said: “Where was the designer for this?” The rest is history.

By the time the building opened in May 1963, a few of Le Corbusier’s original ideas had not survived, said Sekler, including a plan for green roofs. (Safety concerns were cited.) “When you walk through it today,” Sekler said, it’s easy to see that one thing “is absolutely necessary”: restoration of the concrete. The original contractor, Sekler said, made no money from the innovative concrete work “but did it from pride.”

The GSD did more than invite Sekler to speak. On the same day its Loeb Library opened “VAC BOS: GSD and the Making of Le Corbusier’s Carpenter Center,” an exhibit of artifacts and correspondence. Included are eight of 11 penultimate design drawings Le Corbusier presented to the Harvard Corporation in 1961. It’s the first time they have been on public display after five decades at the Harvard University Archives. “Celebrating a 50th,” said exhibit curator Peter Christensen, “gives you an opportunity to see what’s in hiding.”

The drawings remain “absolutely stunning,” he added. Since they are originals, nearby windows at the Loeb had to be coated with photo film to protect against the effects of light.

The exhibit also includes correspondence between Sert and Le Corbusier that reveals an impassioned courting by the GSD dean, said Christensen, who is a Ph.D. candidate in architecture at GSD.

At Harvard in those days, “campus executives were not as sensitive to the importance of modernism,” he said. “It was a real ideological struggle to get him here in the first place. GSD played a major role in trying to push the agenda of modernism to the University.”

Christensen credited not only Sert for getting Le Corbusier to design a building for Harvard, but Sekler, who in his long career befriended some of the great names in 20th century architecture, including Harvard’s Walter Gropius, Le Corbusier, and Frank Lloyd Wright (who once made him a cup of tea).

Fifty years ago, Sekler was the ascendant star in Harvard’s world of architectural history — and several students delivered reminiscences right after his talk. In his day, he was “the only professor who regularly drew applause” for his lectures, said Boston architect Howard F. Elkus, M.Arch. ’63.

Joining Elkus in the audience was Cambridge architect and author David P. Handlin ’65, one of the first undergraduates to take classes in the Carpenter Center — and, as he remembered, one of the guards at the center’s first exhibition. For many semesters he spent three afternoons a week there, he said, and they were unlike any other hours in Harvard classrooms. Students intensively studied form, acquired “a love of making,” and built a sense of community around the Carpenter Center, said Handlin. “It wasn’t just a place for classes.”

Sekler fell in love with architecture as a boy in Vienna and received a classical education there and in London. But he recalled the same sense of freedom and experimentation in the early days of the Carpenter Center.

One day, he said, Gropius came knocking at his door. The architectural icon, then retired from Harvard but still on a committee, warned against being too strict with students. He advised Sekler, “Leave the necessary freedom.”