A thirst for justice delayed 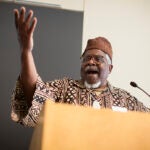 In the 1970s, the Khmer Rouge killed 2 million people in Cambodia’s “killing fields,” roughly a quarter of the population. Today, 80 percent of Cambodians say they’re victims of the regime, including half of respondents too young to have lived under it, but nonetheless affected by it.

The results of the survey, conducted by Harvard researchers Phuong Pham and Patrick Vinck, illustrate the depth and breadth of the impact of the Khmer Rouge’s bloody four-year reign. They also highlight the importance of trials under way today, called the Extraordinary Chambers in the Courts of Cambodia, to prosecute those who participated in the massacre.

Pham and Vinck, also a research scientist at HSPH and HHI, have been conducting surveys of Cambodians’ attitudes toward the trial since 2008, and sharing results with government and tribunal officials to help them understand the trials’ impact on national healing.

The Khmer Rouge came to power in 1975 and ruled until Vietnam invaded in 1979 and installed a government friendlier to Hanoi. During its rule, the Khmer Rouge instituted a policy of reverse migration from the cities, expulsion of ethnic minorities, repression of former leaders and intellectuals, mass killings, and forced labor that, together with disease and starvation, resulted in deaths on a scale not seen since World War II.

The practices gave rise to the killing fields, which referred to sites where people were slain and buried in mass graves, and which became the title of a 1984 movie on the era. Among the most notorious sites was the Tuol Sleng prison, a converted high school in Phnom Penh, the capital, where thousands were tortured and killed.

In 2003, Cambodia agreed to set up a joint Cambodian-United Nations tribunal to try those responsible for the killings. There were to be four trials, the first of which resulted in a life sentence for the commander of Tuol Sleng for torture, murder, and crimes against humanity. The second trial, of four additional top Khmer Rouge leaders, is under way today. The other two are pending.

Vinck said there are delicate judgments to make on how far to extend the prosecutions. Many government officials of the time still hold positions of power, he said, which has led to allegations of political tampering with the trial and even to threats against some international judges.

Pham and Vinck have worked with a local partner, the Center for Advanced Study in Phnom Penh, to conduct several surveys. They began the first survey in 2008 while at the University of California, Berkeley, and have continued their work since arriving at Harvard in 2011, issuing reports that year and this one.

Pham and Vinck designed lengthy, structured interviews that take an hour to an hour and a half to administer, and then trained a team of about 30 interviewers to ask the questions while Pham and Vinck supervised.

Results show that news about the tribunal spreads through the country, but not predominantly through media channels. Rather it spreads by word of mouth through families and friends. Results also show that the younger generation of Cambodians doubts the worst of the atrocities. Until the trial began, the Khmer Rouge era was not taught in schools. In addition, older Cambodians often don’t share their experiences, leaving a gap in knowledge.

“Our surveys showed that the older generation didn’t talk to the younger generation about what happened, and [when they did] younger people didn’t believe the older people,” Vinck said. “The scope of the atrocities is so incomprehensible that it’s understandable that people don’t believe it.”

Despite that lack of knowledge, surveys show that 51 percent of those polled who were too young to have lived through the violent period called themselves Khmer Rouge victims nonetheless. The researchers said that’s because the impact of family members murdered, lands confiscated, and lives disrupted reaches through generations.

Pham and Vinck’s Cambodian work is part of a broader agenda of research examining the importance and impact of international tribunals and justice after atrocities. The two have also worked in Uganda, the Democratic Republic of the Congo, Rwanda, Liberia, and the Central African Republic. They said what drew them to Cambodia was that, unlike nations where tribunals were empaneled not long after the atrocities, the Cambodian court convened nearly 30 years after the Khmer Rouge took power.

“The question is: How do societies affected by conflict rebuild themselves? What is the role of justice? What do international tribunals mean to people?” Vinck asked. “To us, it is an interesting case because it happened 30 years after the conflict.”

They have conducted two public surveys about the trials, each polling 1,000 people. They’ve also surveyed 75 of 90 citizen participants in the first case and a 300-person sample of the 2,000 citizen participants in the second trial. They’ve done several smaller, targeted surveys, which all show that rifts in the nation have not healed, despite both the time that’s passed and the economic progress the nation is making under today’s constitutional monarchy. People still thirst for understanding and for justice.

“For the population, it’s still important to see some sort of justice,” Vinck said. “The demand for justice is very local. They want to know what happened to their family and who did it.”