With radiation, worries about food 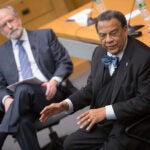 A freedom fighter looks back

This is another part in a series about Harvard’s deep ties to Asia.

TOKYO — Perched on the Tokyo waterfront is one of the world’s largest fish markets, featuring a daily frenzy of buying and selling that starts well before dawn and wraps up by midmorning, with the early start guaranteeing that seafood gets to consumers while it’s still fresh.

The market is an urban wonder, drawing buyers and tourists alike to see its dazzling array of sea life, from crabs to clams to tuna to eel and more. Nearby is a similar fruit and vegetable market, where visitors wind through alleys of stacked boxes packed with lettuce, asparagus, oranges, lemons, and other produce, destined for the table and ready to be loaded into waiting vans and trucks as soon as they’re sold.

The mammoth market generates a frenetic energy, driven by the need for speed to deliver the perishables at their freshest. But the problem of feeding one of the world’s largest cities is not just one of commerce and logistics. In the wake of the nuclear disasters at Fukushima two years ago today, many Japanese are worried about radiation in the food they serve to their families.

Nicolas Sternsdorff Cisterna, a doctoral student in social anthropology at Harvard, has been living in Japan since 2011, trying to better understand people’s perceptions of food safety.

Following a titanic earthquake and resulting tsunami on March 11, 2011, cooling systems for the Fukushima nuclear plant were knocked offline and the reactor melted, spreading a plume of radiation across the countryside that reached as far as Tokyo, more than 100 miles south.

In Cambridge, Harvard’s Reischauer Institute of Japanese Studies, together with several other Japanese-oriented programs and student groups, played a key role in coordinating the University’s response to the disaster. The institute provided resources for students and other affiliates with family members in harm’s way and acted as a coordinating center for local response, which included benefit concerts, a program of seminars and discussions about the disasters and Japanese society’s response, and supporting students planning reconstruction in the fishing port of Minami Sanriku-cho.

The institute is also supporting several major research initiatives, including creation of the Japan Disasters of 2011 Digital Archives, under the direction of Andrew Gordon, Folger Fund Professor of History. The archives benefited from close collaboration with Japanese libraries and research institutes to create an easily accessible collection of digital media documenting the events of March 11 and beyond.

When the quake and tsunami struck, Sternsdorff Cisterna was on Harvard’s Cambridge campus. He had just handed in the prospectus for his doctoral work on food safety in Japan. At the time, it didn’t include anything about radiation.

Sternsdorff Cisterna and his doctoral adviser, Theodore Bestor, the Reischauer Institute Professor of Social Anthropology and director of the Reischauer Institute, immediately realized that the accident made food safety an enormous issue, and shifted his research plan to focus on radiation before he went to Japan several months later.

“I had to start a little bit from scratch,” Sternsdorff Cisterna said. “It took a while for me to find contacts in Fukushima.”

Bestor, himself an expert on Japanese food and culture and the author of “Tsukiji: The Fish Market at the Center of the World,” said Sternsdorff Cisterna’s research is important not just in Japan, but worldwide, because it addresses such complex problems.

“He had a project all ready to go on food and perceptions of the environment in Japan, and then on March 11, the environment abruptly changed for the northern half of Japan, including the Tokyo area,” Bestor said. “His research on food and trust is incredibly important, not only for understanding Japan, but for informing ongoing debates about food safety and nuclear issues around the world.”

As a social anthropologist, Sternsdorff Cisterna isn’t directly studying whether scientists believe that the food is safe to eat. (That task is being handled by scientists and public health officials.)

Rather, he’s interested in a different aspect of food safety, just as crucial in determining what people put in their mouths and those of their loved ones: trust.

The food not only has to be safe to eat, Sternsdorff Cisterna said, people have to believe it’s safe. That problem has been highlighted in a dramatic way for the farmers Sternsdorff Cisterna has met near Fukushima. They say that consumers avoid their produce, even after testing that shows the crops are safe. Farmers from nearby areas, whose produce came under the radiation plume but doesn’t bear the Fukushima name, don’t bear the same stigma.

Lost 80 percent of his business

One Fukushima farmer told Sternsdorff Cisterna that even though his produce has been shown to have no detectable levels of radiation, he still has lost 80 percent of his business. Many farms have shut down, some because they’re within the 12-mile exclusion zone the government placed around the plant, and some because of economic pressures.

“I know some farmers have just given up and gotten out of the business,” Sternsdorff Cisterna said.

Sternsdorff Cisterna has talked to farmers, politicians, Ministry of Health officials, members of a food co-operative, the public, and nonprofit groups such as The Society to Protect Children from Radiation. He has attended 60 to 70 “study sessions,” events common in Japan that are held to educate the public about specific topics. Because he started covering radiation issues late, Sternsdorff Cisterna said he was not only paying close attention to what people said in order to gauge their knowledge and attitudes, he was learning about radiation, too.

“I was learning with them and paying attention to the kinds of questions people asked,” he said.

Along the way, he began to understand the plight of the public. Every day, people had to decide what to eat based on information gleaned from authoritative sources that did not agree, with some saying there wasn’t a very large danger to the public from radiation and others saying that even a little radiation was harmful. The government, meanwhile, lowered the acceptable level of radiation in food, while at least one large grocery chain began testing food for radiation levels, Sternsdorff Cisterna said.

“Safety is not a scientific question alone. There’s trust, confidence. There’s a very subjective and emotional aspect to safety,” he said. “How do people take in scientific knowledge and decide what to eat?”

To be sure, many people do not appear too concerned about the issue, Sternsdorff Cisterna said, but he’s focusing his efforts on those who do.

In downtown Tokyo, not far from the clamor of the Tsukiji Market, is an upscale home goods store called Catalog House, which after the nuclear disaster began selling produce for the first time, trucking it in from Fukushima to help the farmers there. The store installed a radiation detector with which consumers can test their food for radioactive iodine and two radioactive cesium isotopes to be sure that it’s safe to eat. The store even imposed stricter standards than the government did to ensure the produce was safe to eat.

Assistant manager Toru Sato said in an interview that the detector isn’t just used by customers. Some store employees who grow their own vegetables bring them in for testing. He too is worried about his home, because it is in a radiation hotspot created by one of the plumes from the plant. Some of his neighbors have relocated, with one moving to the southern Japanese island of Okinawa.

Sternsdorff Cisterna said he has zeroed in on the Japanese words anzen, which means scientifically safe, and anshin, which means peace of mind. The words are linked often in communications concerning food safety. To Sternsdorff Cisterna, what’s interesting is the choices that consumers make in searching for safety and confidence in their food supply.

“How do their shopping habits change? Are they buying different kinds of food? Are they cooking it in different ways? Are they avoiding certain products or not?” he asked. “How is it made to be safe again? You need to feel somewhat reassured in what you’re eating.”