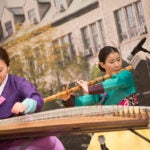 From Hong Kong to South Korea

Professor’s project for U.N. focuses on how businesses should react on human rights concerns

When John Ruggie of the Harvard Kennedy School (HKS) challenged a multinational oil company to total the cost of permit delays, shutdowns, slowdowns, and other disruptions caused by conflicts with local residents over two years, the tally came to $6.5 billion, a number large enough to make even a company with $20 billion in annual profits sit up and take notice.

The cost of those problems never had been added up in one place, and so had been allowed to fester, Ruggie said.

Similarly, a Peruvian mining company lost as much as $20 million a week when its operations were disrupted by local protests. The company handled its problems by bringing in armed security people to violently break up demonstrations.

The lesson, Ruggie said in a talk Thursday at HKS’ Belfer building and that was part of the Mossavar-Rahmani Center for Business and Government’s seminar series, is that local dissatisfaction stemming from perceived abuses by major corporations can be expensive. The costs, he said, can be buried in bookkeeping, or ignored, or absorbed as a cost of doing business.

In addition to the moral imperatives of behaving ethically, such scenarios illustrate why it makes business sense for corporations to pay attention to human rights and concerns and develop procedures to handle grievances before they explode in unrest, according to Ruggie, the Berthold Beitz Professor in Human Rights and International Affairs at HKS and an affiliated professor in international legal studies at Harvard Law School.

At the behest of then-United Nations Secretary General Kofi Annan, Ruggie has been traveling the globe for the last six years, focusing on the issue of human rights and multinational corporations. In 2011, that research led to his presenting the Guiding Principles on Business and Human Rights to the U.N. Human Rights Council, which adopted them. They have since been accepted in some form by the International Finance Corp., the European Union, the Organization for Economic Cooperation and Development, and the International Organization for Standardization.

Governments, Ruggie said, have the duty to protect their citizens from corporate abuses, and so have an important role to play in regulating business activity within their boundaries. Corporations have their own role, which is to respect the human rights of people with whom they interact. Local residents, for their part, have the right to have any wrongs redressed.

Ruggie and the researchers who worked with him on the project came up with 31 principles to help put that framework into action. Among them are the propositions that governments should pass and enforce appropriate laws to regulate corporate behavior, and that corporations should not only adopt policies affirming a commitment to human rights, but perform advance due diligence to investigate the potential impacts of proposed activities on rights.

He used Shell Oil’s experience in Nigeria as an example of how things can go wrong, and how they might have gone differently. Complaints of environmental damage, pipelines running through fields, and other concerns were ignored by both Shell and the Nigerian government. If the company had listened to local people’s concerns, it might have avoided a popular backlash and associated business disruptions that include smashed pipes, protests, and a violent government crackdown, as well as ongoing legal action.

Ruggie, who spoke about the work to 50 faculty members and students during a lunchtime gathering, got involved in what he thought initially was a very different project.

In 2005, when Annan called and asked him to take on the mission as U.N. special representative for business and human rights, the job was supposed to involve a few trips and two years of desk-based research. It was something Annan anticipated Ruggie could do part-time while continuing his duties at HKS. As the work progressed, however, his mandate was extended from providing findings on the subject to making recommendations, and the time frame extended from two to six years. Ruggie would incorporate the work into his Harvard research, bring in additional researchers, and log thousands of air miles while talking with government officials, corporate leaders, and community organizers.

“This was an extraordinary journey. Even with what I know [now], I’m glad I did it,” Ruggie said.

The hardest part of the job, he said, was being asked by people struggling with poor working conditions if he was going to make them better. His response was that the work would begin to change things, but he couldn’t promise a transformation in their lives right away.

“What I found a little bit discouraging is when you’re in” a country with built-in problems, “the needs are so obvious, and you know you can’t just snap your fingers to fix the problem,” Ruggie said. “I’d tell people I’m working as hard as I can, [as] diligently as I can, but I can’t solve the problems today.”