The human toll of war 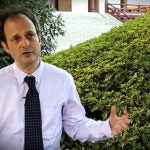 A Harvard bridge to Japan

Ten years ago, television screens around the world filled with the ghostly flashes of nighttime air strikes on Baghdad. The raids on March 19, 2003, signaled the beginning of the U.S. invasion of Iraq.

In December 2011, the last American troops departed Iraq, finishing what supporters call a mostly successful effort to topple a dictator and establish democracy, but what critics say left devastation behind for both the Iraqi people and thousands of U.S. military personnel who had been deployed there.

On Tuesday, representatives of a number of human rights organizations gathered at Harvard Law School (HLS) to reflect on the lasting impact of the Iraq and Afghanistan wars and to discuss their efforts to hold the U.S. government accountable for problems there during the occupation and ongoing to this day.

The event, hosted by the Human Rights Program at HLS, brought together representatives from Iraq Veterans Against the War, the Organization of Women’s Freedom in Iraq, and the Center for Constitutional Rights to discuss the launch of the Right to Heal initiative a partnership they formed to “fight for redress.” The group, along with the Federation of Workers Councils and Unions in Iraq, has petitioned the Inter-American Commission on Human Rights, a monitoring body of the Organization of American States, for a thematic hearing this fall, a formal opportunity to present evidence and testimony of alleged human rights abuses. HLS’s International Human Rights Clinic is working with the initiative.

“Just like many Iraqis, we were not supportive of the war on Iraq,” said Yanar Mohammed of the women who founded the Organization of Women’s Freedom in Iraq in 2003. “Many people in the West would say, ‘But Why? You got rid of Saddam Hussein, why are you not happy with this war?’ Just imagine you are in your house, and you are being bombed, and a big military arsenal comes to your side of the world, and all the killing happens against you. It’s not something to celebrate.” The Baath regime was “a bloody dictatorship which we wanted to get rid of,” she added, “but not in this way.”

Mohammed, who is the president of the group, is part of the coalition calling for the United States to make amends for what she and her colleagues call a humanitarian crisis. Mohammed pointed to what she said was U.S. support of the Iraqi constitution in 2005 that repealed a number of women’s rights, turning them “into subservients.” The constitution introduced more-restrictive Islamic Sharia law, she said, replacing the personal-status law that was a combination of secular and religious. “You will find that women are no longer equal to men.”

Mohammed also said “there is a huge trafficking industry” involving women. According to a study conducted by her organization in 2008, 65 percent of the females being trafficked in Iraq were under age 18, many of them orphans from the war.

A member of Iraq Veterans Against the War, Matt Howard served two terms in Iraq. He told the crowd he considered himself part of a generation of soldiers “going to right a national wrong,” before he deployed to Iraq in 2004. Gradually he began to question the motivations for war as he realized “all of the professed reasons for our being there were P.R. slogans.”

“The reality on the ground was in fact the opposite,” Howard said. “What we were doing was making it worse.

“Time and time again, I heard things [from Iraqis] like, ‘We just want water, we want electricity, we want a sense of safety,’ and in fact since we had invaded, all of those things had diminished dramatically.”

Howard argued that the impact of the wars in Iraq and Afghanistan on veterans has been consistently downplayed and often ignored by military officials. Multiple deployments have taken a toll on U.S. troops, he said, intensifying post-traumatic stress disorder and substance abuse.

Howard also criticized the Department of Veterans Affairs for what he called a growing backlog of claims from veterans, saying, “It’s clear to me and it’s clear to folks in my community that the military has no interest in paying for the cost of war.”

Pamela Spees, senior staff attorney for the Center for Constitutional Rights, a nonprofit legal advocacy group representing the Right to Heal Initiative, called the invasion of Iraq, largely based on claims about an arsenal of weapons of mass destruction that proved to be false, “an unjust war.”

The initiative, she said, is pushing for reparations and justice by giving a human face to the war.

“Surfacing the human experience of these wars,” she said, “is the guiding principle in all of this.”