The film that stirred a cause, perhaps 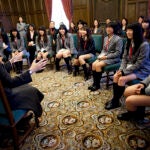 A Ugandan boy speaking almost perfect English struggles to maintain his composure as he discusses his brother, who was kidnapped and killed by the Lord’s Resistance Army (LRA), a militant group led by indicted war criminal Joseph Kony.

“We may meet in heaven,” Jacob Acaye says of his brother. He bows his head, covering his face with both hands, and begins to cry uncontrollably. A man’s reassuring voice is heard: “It’s OK, it’s OK.” He makes a promise to the sobbing boy, “We’re going to stop them.”

Later, another boy, Gavin Russell, blond and smiling, sits in front of the same man — his father, Jason — as he slides a photograph of Kony across a table. “Can I tell you the bad guy’s name?” Jason Russell says. He pushes the photo closer. “Joseph Kony takes children from their parents and . . . makes them shoot and kill other people.”

Gavin looks up from the photo, wide-eyed. “It’s sad,” he says. His father makes another promise: “We are going to make Joseph Kony a household name to bring his crimes to the light.”

These two scenes come from “Kony 2012,” a documentary that has been viewed online more than 100 million times. Directed and narrated by Russell, the co-founder of the nonprofit Invisible Children, the 30-minute film was launched last March and instantly became a social media sensation.

Russell’s goal was clear: to raise awareness among young Americans about Kony’s crimes, which include the kidnappings of tens of thousands of children whom he forced to become soldiers and sex slaves, and build a community that wanted to see him arrested and tried for war crimes. However, critics said the video simplified the conflict in Uganda, and misled visitors to the site about the true demands of activism.

Do mouse clicking and video sharing count as legitimate forms of grass-roots mobilization?

Berkman Center Fellow Ruha Devanesan has been researching the “Kony 2012” campaign and its lessons. As executive director of the Internet Bar Organization, a nonprofit working to improve access to justice through technology, Devanesan has also led the design and implementation of several tech-focused social justice initiatives. She discussed her work on “Kony 2012” during a Feb. 19 talk at the Berkman Center (video here) and also in an interview with the Gazette.

The first step toward momentum is generating engagement, said Devanesan.

“You have to make the issue relevant to [people] somehow,” she says, “Invisible Children managed to take an issue far removed from the 14- to 25-year-old target segment and make it personally relevant.”

As for the critique that the video simplified the conflict, Devanesan responded, “there has to be an entryway” to an issue; simplicity and emotion are two ways to open the door.

“Amnesty International, for example, ran a series of short videos on torture. Those were more about using shock and fear as the emotional draw, as opposed to ‘Kony 2012,’ which uses empathy and sadness. Both appeal to emotions, just different emotions.

“The sweet spot lies somewhere in the middle,” she said, between appeals to emotion and providing more deep-dive information. “It might be that ‘Kony 2012’ simplified too much. Using a cute little kid in your video is like using a cat in your video. It pulls people in, because it’s endearing and charming,” but doesn’t provide much context.

So what lessons does “Kony 2012” hold for social justice advocates?

Soundbytes: Ruha Devanesan — Thoughts on the Fallout from 'Kony 2012'

In this talk, Ruha Devanesan, executive director of the Internet Bar Organization and a Berkman Fellow, explores thoughts on the successes and failures of the initial “Kony 2012” campaign. Devanesan addresses the way in which Invisible Children has responded to criticism and adapted its messaging to ask what lessons can be learned by the human rights advocacy community from “Kony 2012” and Invisible Children’s subsequent actions.

A year later, it remains unclear whether “Kony 2012” has created a new template for leveraging social media. Devanesan explained that campaign strategies have shockingly short shelf lives. “You have to constantly innovate and draw lessons,” she said. “If someone went out today and tried to replicate ‘Kony 2012,’ it would probably fail, because people have seen it already.” Compassion fatigue plays a role; emotional appeals get stale.

Devanesan pointed to one major lesson from the lightning-fast, even unmanageable growth of the “Kony 2012” campaign: Nonprofits should share know-how and resources to better harness core competencies.

“I don’t think the nonprofit making the video needs to do the entire campaign,” she said. “Partnerships between different nonprofits implementing different aspects of the whole picture is the best way forward. A nonprofit may be very good at grassroots activism, for instance, but not so good at branding and messaging.”

Despite its reach, “Kony 2012” has not been an unqualified success. Kony is still in hiding. And the question remains: Will the documentary’s tens of millions of viewers remain engaged, or have they moved on to videos of cuddly kittens?

Devanesan is optimistic: “I believe that their increased awareness from ‘Kony 2012’ about the world outside the U.S. will play a role in their long-term global citizenship,” she said. Political engagement, even if begun through social media and informed more by the heart than the head, can last a lifetime.