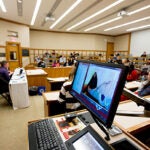 The human toll of war

Jon Favreau has been called the president’s mind reader, by none other than Barack Obama himself. But during a visit to Harvard Kennedy School on Wednesday, the former director of speechwriting at the White House — a veteran of both of Obama’s presidential campaigns — stressed that there’s nothing supernatural about the day-to-day grind of putting words in the mouth of the commander in chief.

“Your only goals are to clearly explain simple policies in as little words as possible, and then spend as much time as you can … inspiring people,” Favreau said.

Favreau sat down in the packed John F. Kennedy Jr. Forum for a conversation with David Gergen, director of the Center for Public Leadership and himself a onetime presidential speechwriter — for Richard Nixon. (Gergen was also an adviser for Gerald Ford, Ronald Reagan, and Bill Clinton.)

It was a fitting venue, given that Favreau’s relationship with Obama closely parallels that of John F. Kennedy and his famous speechwriter, Ted Sorensen, Gergen said. Indeed, just as Sorensen helped Kennedy develop his distinctive voice while working closely with him during his Senate career, Favreau crossed paths with Obama at a similar turning point.

The two met when Favreau was only 22, the day Obama was set to give the keynote address at the 2004 Democratic National Convention in Boston, a speech that would catapult him to national prominence. Favreau’s role in that moment was less than illustrious, he said.

His job, as a staffer for presidential nominee John Kerry, was to ask Obama to remove a line from his speech so that Kerry could use it instead.

“He’s like, who the hell is this kid?” Favreau recalled of Obama’s reaction. “I thought that was the last I’d ever hear from Barack Obama.” But after Kerry lost in November: “I had no job, and I got an email from [Obama adviser Robert] Gibbs that said, ‘It turns out Barack Obama needs a speechwriter.’”

Favreau became the Illinois senator’s only speechwriter. Before a speech they would sit in Obama’s office “and he would talk for 20 or 30 minutes and I would type as fast as I could,” Favreau said. (“I’m a horrible note taker,” he explained. “My penmanship’s like a second grader’s.”)

“He’d been a lecturer at the University of Chicago, and [Obama’s speeches] were a little more professorial,” Favreau said. “He did learn over time the campaign cadence … but he never let go of the authenticity and the logic of how he wanted to structure a speech. The lawyer in him very much comes out when he’s writing a speech, because not only will he give me a nice line or great rhetoric, he will say, ‘I want the speech structured. Here’s 1. Here’s 1A. Here’s 1B.’”

Other voices were often in the mix, Favreau said. When President Obama took office in January 2009, his speechwriting staff faced the task of explaining to the public a financial crash and looming economic downturn they themselves barely understood.

“I hadn’t even taken an economics class,” Favreau said. “I learned economics from Tim Geithner and Larry Summers and the State Department in the middle of the economic crisis — which was good. I was like, we can teach the American people at the same time.”

Favreau rejected the common criticism that Obama can often be cold and aloof.

“He’s the least remote person I could imagine,” Favreau said. “He’s warm, he’s friendly, he’s patient. He’s never — in all the stress he’s been under, in all the situations he’s been in — yelled at me, raised his voice, walked out of a room really angry.”

Though it’s true, he said, that the president sometimes struggles to project the typical politician’s charm.

“He doesn’t do artifice well; he doesn’t do shtick well,” Favreau said. “He knows who he is, he believes who he is, and he’s not going to put on some façade just because he’s supposed to glad-hand with someone.”

Favreau left the White House on March 1 intending to pursue screenwriting. It was a big leap for the 31-year-old, who started working for Obama just two years after he had graduated from the College of the Holy Cross in Worcester.

After eight years of speechwriting, he said, focusing purely on creative projects will be a challenge.

“I have totally lost my own voice,” said Favreau, who studied Obama’s writings so intensely that he took to carrying a copy of “Dreams From My Father,” the president’s memoir, at all times. “To some extent the way I write will always be a sort of shadow of how he writes.????