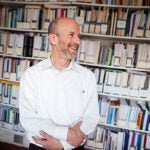 When you see the word “veritas” standing alone, you likely think of Harvard. You probably even know that the word is Latin for truth. But what you may not know is that the University’s motto has decidedly religious origins.

The word is a key to the Latin saying “Veritas Christo et Ecclesiae,” or “Truth for Christ and the Church,” Harvard’s original motto before it was shortened.

With a nod to that venerable religious tradition, the Veritas Forum, a nonprofit founded at Harvard by a group of students, faculty, and ministers in 1992 to explore “life’s big questions,” asked two renowned political philosophers on Tuesday to discuss the hot topic: “Does religion have a role in public life?”

In his remarks, Sandel suggested that a public discourse that disregards moral and religious convictions is “a mistake.” Ignoring such input, said the Anne T. and Robert M. Bass Professor of Government, means we “cut ourselves off from a range of considerations that ought to matter in the way we govern our lives together.”

While welcoming competing voices and opinions encourages a “clamorous and contentious” debate, it also encourages a “morally more robust one than the kind we have become accustomed to,” said Sandel. “Rather than aspire to a toleration of avoidance,” he added, “we should aspire to a pluralism of engagement about hard moral, spiritual, and religious questions.”

Sandel, whose most recent book is “What Money Can’t Buy: The Moral Limits of Markets,” offered the nation’s widening income gap as sobering proof of the need to include the “habits and attitudes and virtues that often find articulation and expression in various faith traditions.”

He fears that those who are well off increasingly accept the assumption that they alone possess the talents and gifts that society values, and therefore they alone deserve the rewards. “That leads to a warped attitude toward one’s own success,” he said, “that is corrosive and overreaching.”

“It’s the idea that merit, success, money, and wealth is the crowning virtue, that ‘I earned it, and therefore it’s mine,’ rather than being alive to the sense in which ‘I am the bearer of gifts that are not my own doing, and much of my good fortune may be thanks to that.’ And that … can support a notion of solidarity that is harder and harder to come by.”

Elshtain, who was raised in the Christian tradition, said she “joined the community of those who chided those who believed,” while she was in college. She became a Deist while studying the Enlightenment. Ultimately, she realized that “much of what I thought I had rejected lived on and burst forth” in her writings, but also in her broader understanding of the world.

Religious teachings, modes of thought “that helped shape the world,” should always be incorporated by wise political thinkers, said Elshtain, the author of several books, including “Sovereignty: God, State, and Self.”

“In the West, one of those formative, formative movements and ways of being in the world is, of course, Christianity. We omit or forget this at our peril … we lose contact with the sources and the forces that have, for better or worse, made us who we are as persons and as a complex, diverse culture.”

What’s needed to foster productive civic discourse, suggested Elshtain, is a type of toleration that recognizes the importance and validity of other forms of religious thought.  She offered the comments of Pope John Paul II during a visit to Kazakhstan in 2001 as an example of “an eloquent defense of toleration.”

“When, in a society, citizens accept one another …  in their respective religious beliefs, it is easier to foster among them recognition of other human rights, and an understanding of the values on which a peaceful and productive coexistence may be based,” the pope said. “In fact, they feel a common bond in the awareness that they are brothers and sisters because they are children of the one God.”