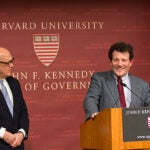 This is the second in a series about Harvard’s deep connections with Asia.

In May 1998, widespread food shortages and stubbornly high unemployment led to massive riots across Indonesia. More than 1,000 people were killed, and longtime ruler Suharto was driven from office.

The violence eventually ushered in a new era for one of the world’s most populous and complex nations, which spans more than 17,000 islands and is home to hundreds of ethnic and language groups that provide the kind of natural divisions that have brought other countries to civil war.

Fifteen years later, Indonesia appears to have skirted those centrifugal forces. Instead, its 242 million people have forged the world’s most populous Muslim-majority democracy.

Interest in their progress led to the creation in 2010 of Harvard Kennedy School’s  (HKS) Indonesia Program, nestled within the Rajawali Foundation Institute for Asia, which itself is within HKS’ Ash Center for Democratic Governance and Innovation.

“They have made a remarkably peaceful transition from dictatorship for 32 years to contested electoral politics,” said Jay Rosengard, lecturer in public policy at HKS and faculty chair of the HKS Indonesia Program. “The problem now is creating the institutional capacity to deliver the goods.”

The program is taking a multifaceted approach to engaging with Indonesia. Affiliated faculty members, including Ash Center director Anthony Saich, the Daewoo Professor of International Affairs, have produced several reports on aspects of Indonesian democracy, studies that Rosengard said seek to be “constructively provocative.”

The reports are distributed free in Indonesia in collaboration with a publisher there. The findings are shared with Indonesian officials and are the subject of conferences and meetings with key leaders. Important chapters are redrafted into policy briefs that leaders can read and digest quickly.

“Our goal is not to produce a report that goes on the shelf” without being read and influencing policy, Rosengard said.

In more direct support for Indonesian democracy and good governance, the HKS program has designed a leadership offshoot, called “Transformasi” or “Leadership Transformation in Indonesia,” for elected local government officials, such as mayors and local district heads. Participants in the program, which provides an intensive look at good government practices, spend one week in the Indonesian capital of Jakarta and three weeks in Cambridge.

“It’s a completely special program geared toward the needs of local leaders in Indonesia,” Rosengard said.

Indonesia faces many challenges, but if it can get right its governance, which Rosengard referred to as “soft infrastructure,” then improvements in “hard infrastructure” – the roads, power plants, and communication technology that tangibly improve people’s lives – will follow.

In addition to its focus on Indonesian government and institutions, the HKS program is also fostering a new generation of researchers interested in the multifaceted island nation. Each year, the program supports about a dozen students with grants and logistical help for research.

In January, Tara Grillos was among four doctoral and masters students who traveled to Indonesia for field work, supported by a term grant from the HKS program. Grillos was conducting preliminary research in preparation for her doctoral work on participatory governance, exploring the possibility of using Indonesia as a case study.

Over three weeks, Grillos met with 16 officials and attended various public meetings. She paid specific attention to a popular and effective program supported by the World Bank and a second program implemented by the Indonesian government. She said she felt welcomed by the officials she met and by ordinary Indonesians whom she met through the Internet site Couchsurfing, which connects travelers and locals all over the world.

For Grillos, couch-surfing turned a long layover on a flight to Jakarta into an opportunity to meet three young Indonesians, who took her to a roadside café in Yogyakarta to drink kopi joos — coffee with burning charcoal dropped in — and tape, a green drink made of fermented cassava.

“We chatted about our studies and our future plans,” Grillos said. “These are experiences that were completely unrelated to my research in some ways, but quite relevant in others. The social culture in Indonesia cannot help but affect the way that people perceive and interact with participatory institutions such as the one I am studying.”

The experience of Grillos and other students, coupled with the outreach to Indonesian officials and the research conducted at Harvard, add up to a program that organizers say should enrich both Harvard and Indonesia.

“We think Indonesia is one of the least well-known and least-understood countries in the world. It’s the fourth most populous, but most Americans can’t find it on a map,” Rosengard said. “We’re excited about Harvard’s engagement in Indonesia. Harvard can learn a lot, and Indonesia can benefit too.”