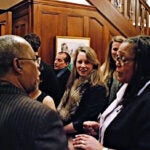 A fireside chat with the dean

A Harvard senior has been named a Churchill Scholar, one of 14 students nationwide who will be awarded one year of postgraduate study at the University of Cambridge in the fields of sciences, mathematics, or engineering.

“I haven’t been abroad to Europe that much, and I’m excited about the opportunity to study at Cambridge and do some traveling,” said Tony Feng ’13. “There are about 200 other people in my program (at Cambridge), so in my mind, it’s a great chance to experience a new part of the world and meet people from very different backgrounds.”

Feng will complete a master of advanced study in theoretical mathematics with a special interest in analysis, differential geometry, and physics, all subjects that relate to his work in algebraic geometry and number theory.

“It’s good to have a broad knowledge of math,” Feng said. “If you jump into research, you can go very deep and become an expert in your field, but I wanted to get a taste of everything first. These special-interest fields will provide a holistic understanding that I hope will ultimately aid my perspectives of number theory and algebraic geometry.”

In addition to his academic accomplishments, Feng has been active outside the classroom, particularly with the Harvard College Association for U.S.-China Relations (HAUSCR).

“HAUSCR runs several projects connecting American students, and in particular Harvard students, with students from China,” Feng said. Last year he was a staff member at HAUSCR’s flagship event, the Harvard Summit for Young Leaders in China, a 10-day program held in Beijing and Shanghai during the summer. The summit brings together about 80 Harvard undergraduates and 600 China high school students.

Feng’s interest in mathematics was sparked by participation in extracurricular mathematics competitions. In 2011, he won first place in the Harvard-MIT Mathematics Tournament for undergraduate students. Earlier, he qualified for the United States of America Mathematical Olympiad, won first prize in the Canadian Open Mathematics Competition, and received a gold medal for mathematics at the International Conference of Young Scientists in Poland.

Feng is a member of Phi Beta Kappa and a John Harvard Scholar. In 2010, he won the Detur Book Prize, awarded to sophomores who had high academic standing at the end of their freshman year.

The Churchill Scholarship pays recipients all university and college fees, including a living allowance, transportation to and from the United Kingdom, student visa expenses, a travel award, and a possible special research grant.