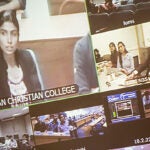 Panel discusses how labeling products could be improved

Food labels appear mundane enough, but the tug of war playing out behind them about what’s on them is anything but.

“Think of a food label as a battleground,” said Michael Jacobson, co-founder and executive director of the nonprofit advocacy group Center for Science in the Public Interest. “The food industry wants it [to be] as tempting as possible, and consumers want information” to help them make informed decisions.

Jacobson, who coined the term “junk food,” described the battle over labeling on Friday during the first of the two-day “Forum on Food Labeling: Putting the Label on the Table,” presented by the Harvard Food Law Society.

His presentation was followed by an hourlong panel discussion featuring representatives from the Food and Drug Administration (FDA), food industry giant Coca-Cola, and a public policy advocate.

During his remarks, Jacobson showed the audience in Austin Hall slides of several products that he said had made misleading label claims before the center stopped them.

A box of Cocoa Krispies cereal claimed it “supports your child’s immunity.” Jacobson said, “There’s absolutely no evidence for that.”

A Capri Sun drink claimed to be “all natural.” Jacobson said it’s made largely from high-fructose corn syrup.

“We go after labels one at a time,” said Jacobson about the center’s efforts. “We try to be right, and we stick to the science.” Taking a food company to court drains resources, said Jacobson, so the Washington-based center wields multiple strategies. “Litigation is not the only, or the best, way to do it. We pressure regulatory agencies” to act, he said. “We get the states to act. There’s a bunch of tools, including publicity, academic papers, and others.”

When describing the performance of the FDA, the food industry’s primary watchdog, Jacobson pulled no punches.

“The FDA just isn’t there” to do the job, he said, “and the food division is pathetic.” The FDA could prompt change, said Jacobson, simply by flexing its muscles. He cited an crackdown in 2011 during which he said the FDA issued warning letters, “and, in every case, the company stopped making the [misleading] claim.”

Jacobson’s half-hour presentation concluded with a call for more regulation and FDA enforcement. Accuracy in food labels is “a low priority for the FDA,” bemoaned Jacobson. He said people are dying in the long term from unhealthy eating, while the FDA maintains a rigidly short-sighted focus.

FDA staff attorney Rebecca Goldberg, J.D. ’07, kicked off the panel discussion that followed by making it clear she was “speaking in a personal capacity only” and not on behalf of the FDA.

She described the “barriers that exist to achieving the perfect food label,” including an alphabet soup of overlapping regulatory agencies. Moreover, she said the First Amendment is involved when government compels commercial speech. “Companies could say ‘you’re violating my First Amendment rights’ ” by imposing an “ideal” food label, she said.

Urvashi Rangan, director of the Consumer Safety and Sustainability Group for Consumer Reports, delivered a talk titled “Modern Food Labels — The Good, the Bad, the Ugly and Why We Need Them” at the Harvard Food Law Society’s second annual conference, “Putting the Label on the Table.”

Jennifer Pomeranz, S.M. ’04, director of legal initiatives at the Rudd Center for Food Policy and Obesity at Yale University, followed by focusing on sugar. She said that while the current requirement that labels show total sugar content is important, she also believes “added sugar should be on the label.” Pomeranz pointed to Minute Maid Fruit Punch, which is “3 percent juice and the rest added sugar.”

She said that sugary cereals appeal to children by using cartoon characters, but convince parents of their value by using misleading label claims. Showing a box of Reese’s Puffs cereal that touted its levels of calcium and vitamin D, Pomeranz noted, “A parent might normally not purchase such a [high-sugar] cereal product except for the nutrient claims.”

Helen Falco, Coca-Cola’s director of nutrition and health policy, shifted the panel’s focus from sugar to calories and obesity. “We propose that calorie information be foremost” on the package, said Falco. “Additional information can be provided, but let’s put it on websites so as not to overload the consumer.” Falco expressed Coca-Cola’s desire to “attack obesity” through dialogue, collaboration, and accessible, fact-based nutritional information.

Coca-Cola, she said, “is committed to informing with transparency” and has “a vested interest in the health of our country.” Falco called for a broad-based anti-obesity campaign because “we’re not going to change the health of this country by [just] changing the nutrition label.”

Falco’s proposal to focus more on calories and less on nutrients caused a stir among the panelists. Goldberg called the calorie-centric approach overly narrow: “I don’t see [calories] as an overriding focus of labeling.” Pomeranz concurred, saying, “Let’s not think about food only in terms of calories, because that’s not nutrition.” Falco countered by saying, “When it comes to obesity, calories are most important. If you consume too much, you will gain weight. It’s not the what [you eat], it’s the how much.”

Andrew Gunther, program director of Animal Welfare Approved, a forum sponsor that certifies the humane raising of farm animals with its AWA label, said afterward, “This is a conversation that needs to happen, and in a place that’s comfortable and safe to talk about difficult issues.” The dialogue certainly “put the label on the table,” advancing an important, if contentious, debate.