Finding ‘a solution to closed doors’ 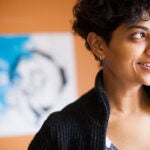 The film that stirred a cause, perhaps

During a lighthearted moment rife with serious undertones, a visiting scholar at the Harvard Divinity School gently corrected her interpreter during a presentation at Andover Hall.

In a discussion last Wednesday titled “Women’s Rights in a Man’s World,” featuring Kholoud Al-Faqih, the first female judge to hold a seat on a Shariah court in the Middle East, her translator said in delivering her remarks in English that she had been chosen the most influential woman in the Islamic World in 2009. Al-Faqih quickly intervened in Arabic. Her translator then corrected his statement, saying she had been chosen the most influential “person.” The change drew loud applause from the crowd.

Al-Faqih described her path to the Shariah courts in Ramallah on the West Bank and her ongoing struggle to make the equal participation of women in the region a reality — the need to “find solutions,” she said, to “closed doors.” (Shariah, the religious and moral code of law derived from the Quran and the teachings of the Prophet Muhammad, also means “path” in Arabic, and governs all aspects of Muslim life.)

After high school, Al-Faqih attended the University of Jerusalem to study law. She graduated with honors and headed to Ramallah, where she was shocked by the absence of women in Shariah courts, despite their centrality to such issues divorce and marriage. “God created us with the ability to think about these things,” Al-Faqih said.

From 2003 to 2008, she represented hundreds of clients, many of them battered women, and began researching the laws and rules of the Shariah court in hopes of becoming a judge. She passed two competitive judicial exams in Palestine in 2008. The next year, she was appointed to the Ramallah Sharia Court in the West Bank.

But the fight to become the first female Shariah judge in the Middle East was only the first step. “Then” Al-Faqih said, “the struggle started.”

Since her appointment, she has faced many challenges, including opposition from male colleagues. But the most painful protests came from women who insisted that only religious men should be allowed in the role. “I was rejected more by women than by men,” said Al-Faqih. Her comment elicited a collective groan from the crowd. But, Al-Faqih added, “I continued, and I am still here.”

In addition to working to change attitudes, Al-Faqih said she is trying to amend the outdated code of Shariah law used in the Ramallah courts that was issued in Jordan in 1976. She said she hopes her work will inspire women and convince them that they deserve the same rights and opportunities as men.

Hauwa Ibrahim, an author and HDS visiting lecturer on women’s studies and Islamic law, described her own experience with Shariah as the first female lawyer among a population of 250,000 in the predominantly Muslim region of Gombe, Nigeria. She said that navigating the male-dominated system took time and a nuanced approach.

“When I started the practice of Shariah I had no voice,” said Ibrahim. As time passed, she developed her voice, she said, by learning to understand “the dynamic of the people.”

Ibrahim praised Al-Faqih for her “ability to turn challenges into opportunities. … I have so much to learn from you.”

HDS Professor Leila Ahmed called Al-Faqih’s presence a welcome sign of progress and change in the attitudes toward women in the Middle East, but warned that political and social unrest in other parts of the world could lead to the reinstatement of Shariah law.

In Egypt and Tunisia, many people, “including devout Muslims, men and women, do not want to see a Shariah court,” said Ahmed, the Victor S. Thomas Professor of Divinity. Ahmed said Al-Faqih’s “extraordinary achievement gives me hope for Palestine and for women, but do be aware that it’s part of a very complicated and very ferocious debate.”

The discussion, which pointed at the intersection of religion and social justice, was made possible by the Susan Shallcross Swartz Endowment for Christian Studies.