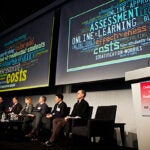 Higher education on the move

The Temple of Amun-Ra at Karnak isn’t the most famous ancient site in Egypt — that honor goes to the Pyramids at Giza — but newly developed reconstructions using 3-D virtual reality modeling make clear its architectural importance and rich history.

Elaine Sullivan, a visiting assistant professor, worked with her colleagues from the University of California, Los Angeles, to digitize 100 years of analyses and excavation records to create an interactive historical document of the architectural phases of the Karnak temple.

Sullivan presented her work Wednesday in a Science Center lecture titled “The Temple of Amun-Ra at Karnak: 2000 Years of Rituals and Renovations in 3-D.”

“You can’t go back in time,” Sullivan said. “You can’t remove monuments that are still standing. But we can simulate it. We can reconstruct the objects and buildings that have been completely lost or destroyed to history.”

The Amun-Ra temple, which was active for more than 1,500 years, is a mega-temple, Sullivan said. “It was so extensive, and was added to by so many different kings, that it provides us with examples of structures not normally seen in every other temple in Egypt.”

The temple’s rich architectural features and history — its hypostyle hall and sphinx-lined processional; sacred pool and towering obelisks; the inner sanctum where the statue of Amun-Ra would have stood — are now available for multidimensional investigation.

What’s most important, though, said Sullivan, is to be able to think about specific moments in the history of an ancient site, “not just the last moment in time, that moment we see when we go to the site.”

The Karnak model depicts the temple from its earliest hypothesized form in the Middle Kingdom, about 1950 B.C., through the Ptolemaic and Roman periods. It allows the viewer to trace the changes of the temple over time, considering how each new stage of construction was a response to the existing landscape, Sullivan said.

The temple underwent dramatic changes, expanding from a small limestone structure to an enormous complex covering a huge area. “Buildings were renovated, pulled down, and replaced in a seemingly constant stream,” Sullivan said.

With only two of 17 still upright, the visual importance of the site’s obelisks has been mostly lost. But in the model, the obelisks dominate Karnak’s virtual skyline. “They would have been some of the only structures seen outside the walls,” Sullivan said.

The 3-D models are “terrific tools for teaching and also terrific research tools, because you begin to ask questions that were not possible before,” said Harvard’s Peter Der Manuelian, the Philip J. King Professor of Egyptology.

Manuelian was a key player in the Giza 3-D project, a re-creation of the Giza Plateau, engineered by Waltham-based software design firm Dassault Systèmes in collaboration with Harvard and the Museum of Fine Arts, Boston.

Manuelian and his staff digitized 100 years of research, using real data to reconstruct the Giza necropolis, from its temples to its underground burial chambers.

Though Giza and Karnak are hundreds of miles and thousands of years apart, both projects reveal new research opportunities, Manuelian said. “It’s a reciprocal relationship. You build these things that become great teaching tools, that become research tools, and they lead you in great new research directions.”

A huge challenge for Egyptologists like Sullivan and Manuelian comes with deciding what era to depict in their models. “Is it the monument in the fourth dynasty or in the 18th dynasty? Or how it was when it was excavated in 1920, or the monument as it exists today?

“Ideally,” Manuelian said, “you have the time and the people and the money to do all of this.”

Sullivan sees the possibilities of 3-D modeling expanding. “Anyone working on ancient material can get new views of landscape, the built landscape, and the ritual landscape by using these models.”

The lecture was sponsored by the Standing Committee on Archaeology and the Harvard Semitic Museum.