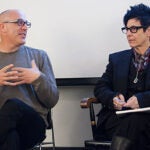 A Congolese soldier, an RPG slung over one shoulder, standing at the roadside smoking a cigarette. He is wearing a wig.

In an orange dress, a young woman whose hair resembles strands of wire. The front lines are just a short drive away.

Two men in a banana grove lowering a purple casket into a grave. The size of a toolbox, it contains the body of an 8-month-old girl killed by cholera.

Mud-covered men squatting in a jungle stream — miners who work for one meal a day and the promise of pay in six months.

These and other images will be on display along the second-floor office walls of the Carr Center for Human Rights Policy at the Harvard Kennedy School through June 30. The exhibit, “Congo on the Wire,” is the work of photojournalist Finbarr O’Reilly, a fellow this year at the Nieman Foundation for Journalism at Harvard. The images are a gift to the Carr Center from Thomson Reuters, the news agency for which O’Reilly is the chief photographer in West and Central Africa.

The photos also summarize the tragedy and travail of the Democratic Republic of the Congo (DRC), a central African nation riven by war. Since 1998, the death toll — from combat, disease, and starvation — has numbered about 5.4 million, making it the world’s deadliest conflict since World War II.

Much of what you need to know about the country is in O’Reilly’s pictures: death from disease, death from combat, intimations of sexual violence, hints of child trafficking, and the exploitation of natural resources.

There is also a sense of the strength and resilience of the Congolese, who remain starkly dignified, even joyful, despite pervasive war. Said O’Reilly at the opening of “Congo on the Wire” on Wednesday: “The reality is that it is a much more joyful, vibrant, alive place” than the exhibit’s images portray. “This is not an expression of daily lifestyle.”

The opening set the stage for “The Congo’s Invisible War,” a 90-minute panel in HKS’s Wiener Auditorium. Gathered there to put words to all the images were a Congolese human rights lawyer, a Boston-based physician, and O’Reilly.

Moderating the panel was Carr Center Executive Director Charlie Clements, a public health physician and human rights advocate who flew combat missions in Vietnam before concluding that war was immoral. Congo has so rich an agricultural landscape that it is “like driving through a fruit salad,” he said — yet its constant state of exploitative war keeps everything off-balance. “Wherever you travel in the Congo, you meet new sets of traumatized people.”

For every Congo death in combat there are 62 related to disease and neglect, said panelist Jennifer Leaning, a physician and director of the François-Xavier Bagnoud Center for Health and Human Rights at the Harvard School of Public Health. That statistic captures the social fallout of war that has made medical services a fragile net and access to food and water unreliable.

The DRC is among the poorest countries in the world and has just 200 miles of paved roads. But it also has an estimated $24 trillion in mineral wealth, abundant potential for hydropower, rain forests second in size only to the Amazon, and soil that is famously rich for farming.

The country’s mineral wealth — and the toll it exacts, especially on children — was one focus of panelist Roger-Claude Liwanga, a Congolese human rights lawyer, co-founder of Promote Congo Inc., and a visiting scholar at Boston University. The other was the toll of war itself — the font “of many damages,” he said, “physical, emotional, and economic.”

Ten percent of the world’s 300,000 child soldiers are Congolese, he said, and 40 percent of those are girls, most of them forced into bush marriages to be the “wives” of fighters.

Another 320,000 children in the Congo work in artisanal mines. That’s about 40 percent of the work force in a cruel industry without health protections or adequate pay. His native country, said Liwanga, is rich in gold, diamonds, uranium, copper, cobalt, and cassiterite, and produces 64 percent of the world’s coltan, a key ingredient in modern electronics.

Proceeds from these riches, he added, are largely used to finance weapons and warriors — perpetuating a chain of violence that goes back decades. Meanwhile, women and children are not adequately protected by Congolese law, or by the international community.

The panelists agreed on the ineffectiveness of the 17,000-strong United Nations peacekeeping force in the Congo. “They are bystanders when it comes to crimes against humanity,” said Leaning. The U.N. force is big and visible, added O’Reilly, “but very poor at protecting anybody.”

Action steps are plain, said Liwanga, who is working on a documentary film about labor and sex trafficking of children in the Congo. Enforce the rule of law, he said, demobilize child fighters, reinforce discipline in the Congolese army (in part by paying soldiers), and improve border security.

Without stronger protections, said Leaning — including more corporate accountability — brutality against women will continue. At least 400,000 women were attacked in one year alone in the eastern Congo, according to one 2011 survey, she said, and a 2010 report found that 40 percent of Congolese women are the victims of rape in their lifetimes.

In the context of widespread rape, gang rape, and sexual slavery, the worst crimes are the “non-specified rapes,” said Leaning — brutal, commonly fatal incidents, often in isolated villages. “They will kill the men, rape the women, and mete out atrocities on the kids.”

From the panel’s audience of 50, toward the end, came a voice from the Congo itself: Francis Lomami, a former Congolese civil servant now living in Boston. The word of this invisible war is getting out, he said.

“All the time, we thank people. We feel now the weight is being spread,” said Lomami. “Nobody was talking about Congolese suffering.”