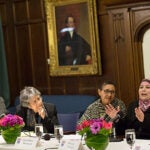 Finding ‘a solution to closed doors’

A Renaissance scientist explains how he helped Obama win re-election

Like his Renaissance namesake who was an artist, architect, and engineer, Michelangelo D’Agostino ’02 has worked to master several fields, including journalism, astrophysics, teaching, artificial intelligence, and data analytics. Now add to that political game-changer.

As a Harvard undergraduate, D’Agostino moved seamlessly between physics and literature classes. He has been known to juggle two or three difficult jobs at the same time. He once conducted astrophysics and particle physics research in Antarctica while contributing science writing to The Economist. So why shouldn’t this Renaissance man help President Barack Obama win re-election in 2012?

Campaign manager Jim Messina had decided that fundraising appeals should be driven by a systematic attention to measurable data. To make that happen, he and Obama needed top-notch scientific minds. D’Agostino was comfortable with big data, statistics, and rigorous testing, and soon found a new home in “The Cave,” the windowless office in Chicago that housed the Obama digital data team.

Like a latter-day alchemist, D’Agostino worked to uncover the mysterious element that transformed emails into fundraising gold.

“Historical data really is a gold mine,” D’Agostino told an audience at his Monday Colloquium at the Physics Department. Data can be used to build projection models that optimize communications and fund-raising efforts, he said during his talk called “Physics and Presidential Politics: The Role of Data in the Obama Campaign.”

“Instead of using gut feelings,” D’Agostino said, “campaigns can now make numerical predictions based on data.”

D’Agostino carefully tested campaign messaging under near-laboratory conditions, using small groups of supporters. Was it better, for example, to attack Republican candidate Mitt Romney or focus instead on the president’s own record? Did casual, funny, angry, or rational messages work best? D’Agostino tested them all, with surprising results.

D’Agostino described how he and the digital team worked on one particular email aimed at highlighting Romney’s big edge in large donations. “The Romney campaign raises more than we do,” said the Obama email. “We can be outspent and still win — but we can’t be outspent 10 to 1 and still win.” D’Agostino tested a dozen subject lines, including “Thankful every day,” “Change,” “Some scary numbers,” and “I will be outspent.”

The subject lines that optimized donations weren’t the hopeful “Change” or the gracious “Thankful.” The pair that played into the anxieties of Obama supporters were “Some scary numbers” and “I will be outspent.”

“When you add it all up,” D’Agostino said, “this kind of optimization made a huge [fundraising] difference.” He would help Obama to raise $504 million online.

Not everyone enjoyed D’Agostino’s lab-tested emails. Jon Stewart, host of “The Daily Show,” mocked their tone of “fake familiarity” in a segment titled “Spamalot.” Every time Obama asked him for $75, joked Stewart, “It’s like you don’t really value our make-believe friendship.” As for casual (“Hey”) subject lines validated by D’Agostino’s test groups, Stewart said, “You don’t need to address anyone as ‘Hey’ to be cool. You’re the president, that’s pretty … cool.”

Asked about Stewart’s humorous jabs at his work, D’Agostino laughed.

Stewart “can make fun of it, but we had the data showing [a casual tone] was working,” he said. “‘Hey’ just kept on winning” over other, more serious-minded, approaches.

In part because of such effective data-mining, Obama was re-elected.