A taste of Harvard in Shanghai 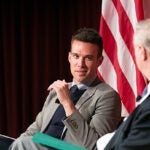 Center hosts executive education, other programs, while doubling as locus for alumni

SHANGHAI — Jeffrey R. Williams stood a tiered Harvard Business School (HBS) classroom, facing a semicircle of dark-paneled desks. His back was to the room’s multiple blackboards, mobile so they could be moved when full, letting faculty members continue writing on blank ones behind.

The room had been organized to take advantage of the case method of teaching, spacious yet intimate, with clear sightlines to the instructor from any point.

Williams nodded at two clocks on the back wall, one with the local time and another labeled “Boston.”

“In Boston, you’re unlikely to have a clock with Shanghai time,” Williams said.

Williams’ Harvard classroom was half a world away, in Shanghai, the biggest city in the world’s most populous country.

Williams is executive director of Harvard Center Shanghai, a foothold designed to assist the University’s involvement in China by providing local knowhow, administrative support, and facilities like the facsimile classroom, which also features a booth for simultaneous translation and extra-wide blackboards so translators can duplicate instructors’ writings.

The 90-seat classroom is used mostly by HBS’s Executive Education program, which Williams refers to as the center’s anchor tenant. But even though it was constructed with support from HBS and the Harvard China Fund, the center is intended as a University-wide facility, as welcoming to those interested in public health, education, or astronomy as to those interested in business.

“We support student activities. We support training, like Harvard Business School’s executive training. We host symposia and conferences. We have staff here who support things like business publishing or delivering Law School programs,” Williams said. “I like to think of the center as a tool. We’re not creating new content ourselves, but we’re helping facilitate Harvard content and bringing it to China.”

Williams points with pride to a planned 2013 conference on the Italian Renaissance because that illustrates the center’s usefulness to programs across the University and highlights the work of Chinese scholars in diverse fields, including European history.

“It reminds people that there’s intellectual activity that goes way beyond the traditional China watcher and China specialist. In fact, the China specialists don’t need a center like this. They speak the language; they have local contacts,” Williams said. The center is really “important for the scholars who need to incorporate China in their research but they themselves don’t have contacts, don’t have the base [from which] to get things done — that’s where we come in.”

The center opened in Shanghai’s Huangpu District in 2008 in much smaller quarters. Large events like HBS Executive Education sessions had to be held in hotel ballrooms or in facilities borrowed from local universities. The center christened its new home in 2010, with a symposium featuring Harvard President Drew Faust and 300 local scholars, alumni, and officials.

The center now occupies the fifth floor of a tower in the International Financial Center, one of several new high-rise commercial complexes that have sprouted in the city’s Pudong section.

William T. Kirby, Chang Professor of China Studies and Spangler Family Professor of Business Administration, together with Jay Light, then the dean of HBS, played a prominent role in getting the center off the ground. Kirby, who is also chairman of the Harvard China Fund and director of the Fairbank Center for Chinese Studies, said a University-wide center in China makes a lot of sense, not just because of the nation’s economic expansion and rising prominence on the world stage, but also because of the growth of its higher-education system.

Higher education in China has grown rapidly, from 2 million college students in 1990 to 6 million in 2000 to 31 million today. Over the last decade, the country has gone from having half the number of college students in the United States to twice the enrollment.

Kirby said the growth has been not only in quantity but in quality. For instance, top Chinese universities have a reputation for excellence that is increasingly attracting collaboration with Harvard faculty members and students.

Kirby said Shanghai was chosen because of its geographic centrality, not only in China but for East Asia. Shanghai’s stature as the nation’s commercial center made it doubly attractive to Harvard Business School as a home for its activities.

“I don’t think there’s a more dynamic city on earth today than Shanghai,” Kirby said. “It’s an extraordinary place: an international center of culture and commerce and a magnet for talent from across the globe.”

The facility also has nine breakout rooms for smaller group discussions, a 90-seat dining area, a large, open, multipurpose space, as well as a suite of offices for local staff.

HBS has the classroom booked for about nine weeks a year and represents approximately half of the utilization of the center, with the rest coming from other programs and schools at the University, Williams said. Early on, the decision was made not to rent the center out, but to focus on encouraging activity by Harvard faculty, students and alumni.

Last fall, for example, students from Shanghai’s Fudan University were able to enroll in the global classroom of Bass Professor of Government Michael Sandel’s  popular “Justice” class.  About 20 students came to the center at midnight to participate remotely in the class, held at 11 a.m. Cambridge time in Harvard’s Sanders Theatre. Together with students in Paris, Tokyo, New Delhi, and São Paolo, they were able to see Sandel on the big screen in the center’s multifunction room, as well as students from the other locations in smaller images inset on the screen.

Williams said Sandel could see the same thing, so he could say, “Shanghai, the student in the white shirt in the front row, what do you think about this?”

Recently, professional schools including Harvard Medical School and Harvard Kennedy School have started planning continuing education programs in Shanghai, broadening the base of users beyond HBS.

The center also provides administrative support for ongoing programs such as the Harvard Project on Disability, a Law School program that supports those seeking to improve the lives of disabled people around the world. The center supports the Harvard China Fund’s Harvard China Student Internship Program, which has brought 200 students to China over the last six years for nine-week summer internships with Chinese companies and nonprofits. The center provides orientation for students after they arrive in China, arranges a field trip before they begin work, and remains a resource during the course of their stay. This summer, students will be staying in seven cities across Greater China, Williams said.

The center also is a gathering place in the Shanghai area for Harvard’s alumni community, which is some 500 strong, according to Kate McFarlin, president of the Harvard Club of Shanghai.

“With the Harvard Center here, we have a much more serious focus for Harvard in Shanghai,” McFarlin said. “The center’s been a great boon for our community.”

Harvard has concluded that opening degree-granting satellite campuses is the wrong approach for it to take in an increasingly globalized world, Kirby said. But it may make sense to have physical facilities, perhaps even research institutes, to support faculty work in key cities. If that’s the way the University decides to go, Kirby said, planners of the Shanghai center left open space that can be developed for future purposes.

“It gives us enormous flexibility as our plans and aspirations change around the world,” Kirby said.