A.R.T. sets the scene in Allston 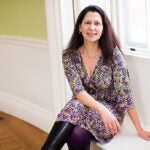 On a dark and stormy night, deep inside the Harvard Allston Education Portal, one of three local lions was wailing for his waitress.

The audience of 12 local children burst out laughing at the skit, which transformed the stone lion heads on a fountain into three ravenous creatures harping on their server.

This was one of three scripts inspired by Allston’s Raymond V. Mellone Park and written by children attending a playwriting class at the Harvard Allston Education Portal.  The Ed Portal, which brings Harvard teaching, learning, and research to the Allston-Brighton community, also serves as the community’s front door to Harvard’s educational, cultural, arts, and recreational resources. Led by the American Repertory Theater (A.R.T.), the Allston program emerged from the  A.R.T.’s neighborhood podcast plays project, which creates original plays inspired by locations and settings around Boston. The plays are then recorded by professional A.R.T. performers and made available via podcast.

“It was a really great class,” said Allston resident Nora Lyons, whose group penned a murder mystery set in the park. “It showed that you can learn a lot while you’re having fun.”

Over four weeks, Brendan Shea, A.R.T. education and community programs associate, worked with the children, instructing them on the dynamics and challenges of writing a single-scene play. In writing their scripts, the groups of students first discussed the components of a play, such as character development, plot, and conflict. They then traveled to the park and let their imaginations do the rest.

“It really made sense to launch a partnership with the Ed Portal with this workshop, because it’s a great way to use the arts to learn more about our world,” Shea said. “It has a literary component, it’s about local places and exploring our neighborhoods and it’s also a lot of fun.”

The A.R.T. program is part of a budding arts effort at the Ed Portal, which tripled its size in the fall and has been steadily expanding its community programming since.  The A.R.T. also began a fairy tale workshop at the Gardner Pilot Academy in Allston this spring and has partnered with the Ed Portal to give out discounted tickets for A.R.T. performances to Allston-Brighton residents.

“We want to share the best of Harvard with Allston and that certainly includes the A.R.T.,” said Robert Lue, faculty director for the Ed Portal, professor of the practice of molecular and cellular biology, and faculty director of HarvardX. “Their programs have a long history of inspiring learners of all ages through shared passion and creativity, which are exactly the kinds of experiences that further strengthen the links between Harvard and the community.”

For aspiring playwrights in the A.R.T. program, the key is to think outside the box and look at everyday locations in a new light as the setting for their play, which is how the fountain worked its way “onstage.” The playwrights then collaborated on writing the script, establishing the world of the play, determining the conflict between the characters, and delving into the characters themselves — a process mirrored by professional playwriting projects at A.R.T.

Click the play button above to listen to recordings from the A.R.T. For more info, visit http://hvrd.me/15OLRHX.

“It takes cooperation,” said Cynthia Fu, a Brighton resident who took the class with her older sister, Clair, adding that collaborating with other students “makes it easier to write a story. You don’t have to do it all by yourself.”

In that same spirit of collaboration, Greg Lyons, Nora’s father, voiced his appreciation of Harvard’s efforts to reach out to the community through institutions such as the Ed Portal.

“It’s a marvelously innovative program, and an incredibly valuable effort on Harvard’s part,” Lyons said. “It’s to Harvard’s great credit that they’ve taken these steps forward and have established the Ed Portal. Many of our neighbors and friends have their children involved in the programming at the Ed Portal, and they feel the same, that this is a great thing to have so close to us.

“It’s inspiring for the kids, because they get to work with students and professionals at one of the world’s leading academic institutions,” he added. “When you plant those kinds of seeds in kids’ minds, the benefits they will reap down the road … it’s just an incredibly valuable effort on Harvard’s part. It broadens the possibilities in our kids’ lives and makes them even more tangible.”

Since 2008 the Ed Portal has connected children from Allston-Brighton with Harvard undergraduate students through mentoring in math, science, and writing, and, as of this year, arts and public speaking. It also hosts a faculty speaker series, workforce development classes, and special events such as movie nights, wellness classes, and workshops run by Harvard students.

Asked whether she felt other children in the area should consider becoming involved with the Ed Portal’s programming, Clair Fu didn’t hesitate. “Oh, most definitely,” she said. “Not only classes like the A.R.T. playwriting course, but also the Ed Portal’s mentoring program. I started when I was in the fourth grade, and it’s really improved my work.”

“Other kids should join the Ed Portal,” her younger sister, Cynthia, chimed in. “We totally recommend it.”