A postwar call to service 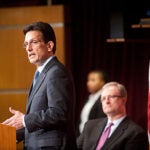 McChrystal weighs in at HKS panel on needs of newest veterans

After more than a decade of war, the United States faces a rising domestic challenge: reintegrating more than a million veterans who have returned from Iraq and Afghanistan, and another million expected to come home in the coming years. To help them build new lives, the nation must channel that generation’s enthusiasm for service, said Gen. Stanley McChrystal, former commander of U.S. forces in Afghanistan, at Harvard Kennedy School (HKS) on Monday.

“When we send young people away, we’re responsible for them,” McChrystal told a packed audience during a discussion of veterans’ policies at the John F. Kennedy Jr. Forum. “Not to give them something, but to give them an opportunity to continue to serve, give them a place to fit in.”

The event, “Ask What You Can Do For America’s Veterans,” preceded a campus dinner for Harvard veterans and active-duty service members, a biennial tradition organized by the Center for Public Leadership, the Belfer Center for Science and International Affairs, and the Harvard Veterans Alumni Organization. Veterans were honored at the panel session as well. After service members in the audience stood to be recognized, President Drew Faust addressed the crowd by video.

“You represent to our entire University community what it means to be a soldier and a scholar, binding action and thought as you pursue wisdom,” Faust said. “I pledge to you that we will continue to foster a campus environment in which military service is upheld as one of the finest examples of public service.”

Later at the veterans’ dinner, Christine Heenan, Harvard’s vice president for public affairs and communications, announced that Faust had received the Navy Distinguished Public Service Award from Navy Secretary Ray Mabus for her work in reinstating the Naval Reserve Officers Training Corps on campus in 2011, after a 40-year absence of an official military presence at Harvard.

“Her deep appreciation for the sacrifices made by members of the armed forces has inspired many members of the Harvard community to heed the call for public service,” Heenan said of Faust.

But even as Harvard has renewed its focus on supporting veterans and officers-in-training on campus, the question of how best to help the newest generation of veterans readjust to American life is far from resolved. The evening’s panelists highlighted ways in which the country could do more to help its returning military, from expanded educational and health care programs to community inclusion efforts.

In the past, “as a nation we’ve risen to the occasion and met veterans’ needs after war,” said Daniel Feehan, an HKS student who is in the U.S. Army, who moderated the discussion. “Today I would argue we are at that moment for this generation” who fought in “the global war on terror.”

As mayor of Houston — which has 300,000 veterans in its metro area — Annise Parker has seen how overwhelming the challenge can be. To reduce homelessness among veterans (a particular problem among Vietnam veterans), the city has expanded its social service and housing programs and instituted hiring preferences for veterans in its police and fire departments. Houston also treats its Veterans Day and Memorial Day celebrations as opportunities for outreach to recent vets.

“It’s really not enough to hand someone a nifty brochure listing all the available social services, because nine times out of 10, those veterans are going to think they won’t need those social services; they’re fine,” Parker said.

The city also has educated civilians about veterans’ injuries, such as post-traumatic stress disorder and traumatic brain injury.

Far from potential threats, this crop of veterans should be viewed “as civic assets,” said Spencer Kympton, M.B.A. ’04, who is president of The Mission Continues, a nonprofit that helps veterans find ways to volunteer and connect with their communities.

“This is an all-volunteer force,” Kympton said. “Every single one of them willingly and soberly chose to serve in the military over the last decade, and that choice indicates that on average this generation has a proclivity to serve.” The goal of his organization and others like it, he said, is not to “give handouts” but to tap into veterans’ desire for the sense of purpose, team spirit, and mission that the military once provided them.

New recruits list a desire to serve their country as their primary motivation for entering the military, Feehan said, but a desire to pay for college comes in a close second. Panelists debated what could be done to improve educational outcomes for young veterans, whose degree completion rates, by some estimates, are as low as 15 percent.

“We probably don’t make [the GI Bill] goal-oriented enough,” McChrystal said. “We pay someone to go to school, but we don’t track the outcome of the education quite as tightly as we might.”

Because some veterans aren’t prepared to attend college right away, Kympton said, “There’s an opportunity to expand the GI Bill so that it’s relevant and meets the veteran where he or she is.” The bill could be expanded to subsidize time in domestic service programs, “which could better prepare veterans for when they do enter college.”

After the event, McChrystal lauded Harvard for its efforts to increase the visibility of veterans on campus.

“When you come to a place like this, the first thing you want to do is hide the fact that you’re a service member, because you want to fit in,” McChrystal said, recalling his own trepidation at entering HKS in his 40s as a National Security Fellow. “I think what we’ve got to do is ask undergraduate life to expand its horizon a little bit. Don’t think of freshmen as 17, 18, 19. Think of freshmen as 17 to 28.”