A new face at the Vatican 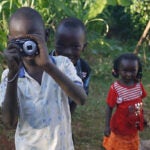 Harvard analysts weigh in on Catholic Church’s pope, and its future

After a telltale release of white smoke and an hour of suspenseful fanfare, Vatican leaders on Wednesday announced the new head of the Roman Catholic Church: Jorge Mario Bergoglio, an Argentinian cardinal.

The selection marks a shift for the 2,000-year-old institution. Bergoglio, 76, will become the first non-European pontiff and the first leader from the Jesuit order, known for its intellectual tradition and care for the poor. Bergoglio will be known as Pope Francis, named after the modest friar who also tended the poor and worked to re-instill energy into the church. The new pontiff succeeds Benedict XVI, who also made history, in his case by becoming the first pope in nearly 600 years to resign.

Gazette reporters Katie Koch and Colleen Walsh spoke to Harvard professors familiar with the Vatican and its workings to gauge their thoughts on the 266th pope.

J. Bryan Hehir is the Parker Gilbert Montgomery Professor of the Practice of Religion and Public Life at Harvard Kennedy School. A diocesan priest, Hehir is secretary for health care and social services in the Archdiocese of Boston.

GAZETTE: Were you surprised by the choice of Cardinal Bergoglio?

HEHIR: Some reports from the conclave that elected Benedict XVI [in 2005] — reports that you can’t verify — said at the time that Bergoglio was No. 2 in the voting, and certainly he was talked about as a possible candidate for the papacy at that time. He hadn’t been talked about a great deal in things that I’ve read leading up to this conclave. In that sense, it was a bit surprising.

It’s surprising and, I think, a wonderful thing that a Jesuit, a member of the Society of Jesus, was named to the papacy. The Society of Jesus has always had a special tie to the papacy. Members of their order take a vow as part of their training to be at the disposal of the papacy. This is a very interesting appointment, the first Jesuit. Even though I can’t say I know a great deal about him, what I have heard consistently is that he has been a voice for and a support of the poor in his country, which has gone through very difficult economic times.

GAZETTE: Francis will also be the first pope of the modern era who is not from Europe. Do you think that choice was deliberate?

HEHIR: Geography was not the determining factor, for sure, but I think geography was on the minds of many people leading up to this election, including the electors. Simply the fact of Latin America having roughly 265 million Catholics — that’s an important thing to take into consideration. It can’t be the only factor, but having made the choice of a Latin American, I think that will speak loudly not only to Catholics and others in Latin America, but to the Southern Hemisphere generally as a recognition of their great significance in the life of Catholicism today.

GAZETTE: The Southern Hemisphere, as you alluded to, is where the majority of the world’s poor currently live. Do you think this signals a new direction for the church in reconnecting with its social justice roots?

HEHIR: I think there will be a strong stress on social justice because of his own history, on the one hand, and secondly because social justice has been a major, major theme of the church in Latin America since the Second Vatican Council [in the early 1960s]. Thirdly, the Jesuits in Latin America have been a leading voice about the pursuit of justice and concern for the poor. The Jesuits in Central America, for example, have been leaders in a very conflicted period of time, and that has led to martyrdom for some of them.

GAZETTE: We’re once again seeing a pope enter the papacy at an advanced age — a factor that led to Benedict stepping down last month, and that could produce another relatively brief tenure for the new pope. Do you think continuity of leadership is something the church needs to consider at this point?

But the question of what kind of change he will bring will depend upon his own intellectual convictions, his personal style, and his own assessment of what dimensions of the tradition can and should change, while at the same time making those changes within the wider context of the Christian Catholic faith.

GAZETTE: What is the significance of choosing Francis to honor St. Francis of Assisi?

FIORENZA: Francis [founder of the Franciscans, in 1209] gave up wealth that he had and he sort of incarnated — I don’t want to say anti-institutional — but an un-institutional incorporation of Christianity, being concerned with the poor, being concerned with others … and so the [name] Francis was always known for that. You know how some people admire Sean O’Malley because he’s a Franciscan and walks around in sandals, and then gave up the mansion and lives in an apartment? Well, the new pope did actually the same. He gave up the mansion in Argentina … he would take the buses to travel places, so I think it’s that kind of personal spirituality of a Franciscan that he is symbolizing by the name, even though he himself is a Jesuit. That’s what I think is important.

GAZETTE: What is the significance of the new pope being the first from South America?

FIORENZA: It’s really showing how the axis of Christianity is shifting from Europe to the Third World, and that the numbers of Christians are the most numerous in Spanish-speaking, Portuguese-speaking countries, so it’s a time of symbolizing the importance of that for the church. And you might say it might be an attempt to appeal to native Latin Americans. If one of yours is now the pope … [now they can] identify their ethnic and geographical background with the center of the church in Rome.

GAZETTE: Does his record while he served in Argentina indicate whether or not he will support a more conservative agenda as pope?

FIORENZA: He took, what I would call, some more conservative positions [while in Argentina]. There has been some criticism about whether he was forceful enough against the military dictatorship. Those criticisms have been raised. He is orthodox in regards to the social issues … [With] this conservative streak, as well as this more evangelical, in a positive sense … spirituality, he maybe appeals both to conservatives and he appeals to liberals. That’s why he got the most votes next to Ratzinger [at the last conclave]. So I don’t want to make as much of a statement of where he’ll be — I think we’re not sure — but I think that explains there is something in him that diverse groups of people can identify with.