A Harvard bridge to Japan 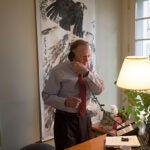 Admissions, beyond a single test

Part of a series about Harvard’s deep ties to Asia.

TOKYO — Carl Kay still doesn’t know the source of his passion for Japanese.

When he came to Harvard in 1974 as an introverted, philosophical teenager from Marblehead with an inexplicable fervor for the language, he thought he’d become a mathematician. He considered himself good at math, after all, and the subject seemed, well, practical.

But he soon thought he was in over his head with math, while his Japanese classes excited him.

“It’s mysterious to me,” said Kay, who today is a businessman in Tokyo and president of the Harvard Club of Japan. “It caught my attention.”

Kay went on to earn a bachelor’s degree in 1978 with a concentration in East Asian languages and civilizations; for his senior thesis, he translated a dozen classical Japanese poems and compared and contrasted his work with existing translations. He graduated without much of a career plan, but his time at an august liberal arts institution became, in essence, vocational training.

As a Japanese scholar in the late ’70s, Kay found that his timing was right.

Japan then was making a mark on the international economic scene, and emerged in the 1980s as a global model of how to do business. To make ends meet, Kay began translating Japanese technical documents in his Cambridge apartment and started a boutique printing company. As more translations came his way, he realized he had to hire others to keep up with the demand.

“I had to find someone to help,” Kay said. “That was the day I went into business.”

The company grew in step with Japan’s economic prominence. Kay eventually employed 30 people, most of them Japanese, in an office in Kendall Square. They entered the software localization business when the company was approached by Microsoft to translate the user interface for Word into Japanese. They did the same for Adobe Photoshop and other software companies whose developers were seeking access to the Japanese market.

In the mid-1990s, Kay moved to Japan to expand the company, opening a subsidiary in Osaka. Amid a technology boom, his business doubled two years in a row. Large clients such as Microsoft, however, began to desire that their language localization worldwide be handled by a single vendor, prompting Kay to sell the company in 1998 to Waltham, Mass.-based Lionbridge, which went public in 1999.

Louise Cort, curator for ceramics at the Smithsonian Institution in Washington, D.C., years ago taught a freshman seminar that included Kay, and described him as thoughtful, if sometimes whimsical. Cort was also in Kyoto when Kay left Harvard to study there for a year. The two have kept in touch since.

“I remember watching him go through culture shock. He pulled through,” Cort said. “He’s always thoughtfully looking at things, trying to figure them out.”

Since selling his company, Kay has consulted for firms doing cross-border business, served as an adjunct faculty member at Meiji University’s Graduate School of Global Business, and co-authored a book on the Japanese service sector.

After moving to Tokyo, Kay became involved with the Harvard Club in 2005, at first taking over responsibility for events and activities. He worked to bring in regular offerings that would attract people with different interests.

Though he has since put event management in the hands of a committee, Kay still helps organize. In late February, for example, he led a group of alumni to the Tokyo headquarters of Iwatani Corp., Japan’s largest supplier of liquefied petroleum gas. The alumni attended a lecture by Iwatani scientists on a company initiative to develop hydrogen-powered cars. Afterward, the group made its way to the company’s garage to drive two experimental cars to a hydrogen filling station.

Kay had gotten the idea for the event when he encountered an Iwatani executive on an annual study mission to Harvard by leading Japanese companies. After talking with the visitors and becoming intrigued by the possibilities of hydrogen car technology in the changing global energy scene, Kay seized the opportunity to schedule the club visit.

Kay, who became president of the club in 2008, said he wants it to be a reminder to Japanese alumni of the intellectual and social freedom of Harvard Yard.

Paul Tange, who has been vice president of the club for several years, praised Kay’s work to make the organization welcoming to all members.

“The presidency of the club is a demanding, time-consuming, and perhaps even thankless job, but in more than four years of our working together, I have only seen Carl undertake his role with the utmost dedication to and respect for the University. At the same time, he realizes what the club means to its members,” Tange said. “He has always endeavored to provide meaningful events and programs for the thousands of members in Japan.  Under his presidency, the number and scope of events has increased tremendously, from monthly Zen meditation sessions to a 350-person formal dinner with University President Drew Faust.”

Kay has embraced his leadership role in the club, saying that it’s his way of giving back to the Harvard community, and that it scratches an organizational and leadership itch that he’s missed since selling his business.

It’s important, Kay said, that Harvard be well represented in Japan, a nation with which the University has had a long and positive relationship. He cited the groundbreaking work of former professor and U.S. Ambassador to Japan Edwin Reischauer. Today, Harvard’s institute of Japanese studies that bears Reischauer’s name is a major resource for people interested in the Asian nation, as well as a selling point for the University to promising Japanese high school students.

“Harvard is a very influential institution. It’s important that it be well represented in every country in the world,” Kay said.