A freedom fighter looks back 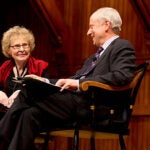 Almost half a century ago, a cohort of Alabama state troopers and Dallas County sheriff’s deputies confronted about 600 civil rights protesters in Selma. The resulting mayhem — a melee of stinging tear gas, lunging police dogs, and a charging white civilian posse on horseback — injured 60 marchers.

Captured by television cameras and later broadcast on ABC to 48 million viewers, the attack on March 7, 1965, became known as “Bloody Sunday,” the emotional climax of a movement that later that summer led to the landmark Voting Rights Act. At the time of the march, about 15,000 black adults in Dallas County were old enough to vote. But only 130 were registered, having slipped past a literacy test and other civil impediments.

“It is hard for us to comprehend,” said Evelyn Brooks Higginbotham, chair of Harvard’s Department of African and African American Studies, starting a panel discussion Thursday at Tsai Auditorium marking the exact anniversary of Bloody Sunday.

Luckily, there was a witness and interpreter on hand from those days long past, Andrew Young, who has been an activist, minister, mayor, congressman, and U.S. ambassador to the United Nations. For a late-afternoon audience of 200, his reminiscences were an aid to comprehension.

“A Freedom Fighter Looks Back” was co-sponsored by Higginbotham’s department, the W.E.B. Du Bois Institute for African and African American Research, the Center for American Political Studies, and the Black Policy Conference at the Harvard Kennedy School. Moderated by Daniel Carpenter, the Allie S. Freed Professor of Government, the event was billed as a conversation with five respondents who study the Civil Rights Movement as history or as practical theology.

But it was largely Young’s day. He held forth with stories that provided an intimate, non-academic look at the handful of activists who 50 years ago transformed the American social landscape. Some of the stories were funny, like the time he and the Rev. Martin Luther King Jr. found themselves at a meeting in a former plantation house in Virginia. The two black men settled into rocking chairs on the veranda, were served iced tea by white college students, and watched other white people mow the spacious lawn. King said to Young, “From up here, slavery doesn’t look too bad.”

For his largely young audience, the onetime U.N. ambassador was an ambassador to the past. At times, he was a gentle corrective to the academics around him, part of an “expanding priesthood” of civil rights scholars, said commentator Diane McWhorter, whose work is to parse a past era. And why not, she added. “The Civil Rights Movement is our country’s bible.”

McWhorter, a New York-based journalist and a fellow at the Du Bois Institute, wrote the Pulitzer Prize-winning history of the Birmingham civil rights battles called “Carry Me Home.”

‘Listen to him, not just read him’

Young was not the only corrective presence during the session. There was King himself, captured in an audio clip from a 1965 mass meeting. “You always have to listen to him,” said Barnard College sociologist Jonathan Rieder, “not just read him.” The clip was a scratchy reminder of King’s extemporaneous power. “We are moving up a mighty highway towards the city of freedom,” he said.

There was also the corrective sound of music, with two a cappella freedom songs from the Kuumba Singers, the group founded at Harvard shortly after King’s death.

If there was a required text for the event, it was King’s 1963 “Letter from Birmingham Jail,” an impassioned and impatient cry for non-violent resistance and a complaint that most white Americans had no empathy for the plight of blacks. Just a week into a campaign protesting racial injustice in this signature Southern city, King wrote the open letter in a narrow jail cell, penning its first words on the margins of a newspaper. There is “a moral responsibility,” he wrote in the now widely anthologized missive, “to disobey unjust laws.”

Rieder called the letter “a taunt. America was not yet a great land.” King emerged from jail “an extremist for justice,” he added, impatient with waiting and regretful of his cautious ways until then. “The diplomat gives way to the prophet.”

If there was a leitmotif to the event, it was the idea of a prophet’s “madness,” his moral prescience.

“Such was the life of a prophet,” to have a moral tuning beyond the ordinary, said Jonathan Walton, Harvard’s Plummer Professor of Christian Morals and Pusey Minister in the Memorial Church. “Prophets hear at a higher decibel and see at a more acute level than the rest of society,” he said, taking a page from Duke University theologian Richard Lischer, and they “can hear injustice when others sit in naïve silence.”

Young agreed that King was out of the ordinary, the single prophet and demonstrably great man in the movement. “There was nothing that special about us,” he said of the rest, adding his daughter’s description: “You all were just some get-down men, who happened to be in the right place at the right time, and you did the right thing.”

Doing the right thing, with the Birmingham letter as inspiration, still applies, said Tommie Shelby, who has a joint Harvard departmental appointment in philosophy and African and African American Studies. “The way to commemorate the letter is to see it as a living document,” he said, “something that can teach us now.”

In answer to the commentators, Young put the Birmingham letter in context. By 1962, there had been 60 bombings of black churches and residences in Birmingham, enough that one neighborhood was called “Dynamite Row.” At issue was emerging prosperity, as “black people were leading ordinary, decent lives,” said Young. “This enraged white people.”

By early 1963, King was a reluctant prophet, he added, afraid to enter another jail cell and hesitant to demonstrate openly. “He had a five-year trauma,” said Young, a period in which King had been jailed, stabbed, and targeted with a bomb. “Any move he made was almost certain death.”

On the day of King’s Birmingham arrest, Young found him in his bedroom with a pillow over his face, on the phone, “telling Coretta he was going to jail.”

King entered the jail fearful and depressed, but had an awakening there, thanks to a published letter from eight Southern white ministers. Civil rights, they insisted, should be settled in the courts instead of in the streets.

McWhorter said that letter had “zero impact” on the concurrent Birmingham protests. But the protests themselves were, in 1963, “the 20th century version of Gettysburg,” she said.

Young recalled meeting with white business owners during the 1965 Birmingham protests and boycotts. “We have made a decision,” he and others told them. “We are not going to cooperate with segregation.”

Amid this, Young drew on lessons of tolerance and calm from his own boyhood in New Orleans, where he had grown up in the 1930s in an enclave of Italians and Irish just off Canal Street, and 50 yards from a local Nazi Party headquarters. His father, a dentist, told him there was wisdom in tolerance. “If you’re in a fight,” he remembered hearing, “if you lose your cool, you lose the fight.”

In those days, Young and his prosperous family were part of sociologist and civil rights leader W.E.B. Du Bois’ “talented tenth,” a middle class that prized getting along without giving up. “You don’t get mad, you get smart,” he said. “I’ve been dealing with crazy, mean white folks all my life.”

But by the 1960s, that attitude had earned Young a reputation as being too conciliatory. “I get tired of being an Uncle Tom,” he told King, who answered, “That’s your role.”

Young’s role was also to get far to the right of King, to appear as conservative and careful as possible, so King “could come down in the middle,” he said, and appear moderate.

King’s own life counsel was moderate in the charged atmosphere of the times, said Young. “We have to be merciful,” he remembered King saying. “You don’t know how you would act if you were born white.”

The mild manners Young shared with King had to do with their shared upbringing in a comfortable black middle class. “Martin Luther King and I lived very privileged lives,” said Young. “We didn’t have any racial problems. Our parents protected us.”

Once federal laws were finally in place to guarantee voting and civil rights, the movement looked out at the rest of the world. The Vietnam War was in full swing, said Young, and King decided that “we have to apply nonviolence to the international situation.”

That still applies, Young said, though nonviolence is widely seen as a form of weakness, even though it works. “Is Dennis Rodman crazy for talking to the North Koreans,” asked Young, “or is our State Department crazy” for refusing to talk to them, engage them, or show them respect? “We’ve got to figure out what is crazy in this world, and what is reason.”

After King confronted war in 1968, he decided to confront poverty, which he regarded as a civil rights affront as well.

That year, said Young, King was on the verge of promulgating a new era of civil rights that would expand the notion of justice to the poor. “To end poverty was just to expand the New Deal to the poor,” Young said of King’s plan, and he wanted to bring to a heaping table the 30 percent of Americans who had not yet entered the middle class. King was assassinated that year.

Today, the three main issues of the civil rights era — racism, war, and poverty — have been only partly addressed, said Young. “Legal racism is dead. Legally, we killed that,” he said. “War is increasingly seen as unpopular and irrational. But we have not even come to understand the evil of poverty. We’ve criminalized poverty, and we put people in jail at greater expense than it takes to educate them.”

Offshore tax havens these days are the repository of as much as $35 trillion, he said, a sign that the fight against poverty should be the new frontier for civil rights.

Last year, Young encountered some economic protestors in the Occupy movement. “Look, don’t sit out here in the cold,” he recalled telling them. “Get inside and study some economics.”