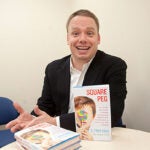 A wild Rose in bloom

Marian Wright Edelman, a tireless crusader for children’s rights and founder of the Children’s Defense Fund, came to Harvard on Wednesday to address a distressingly familiar topic: school violence.

During a panel discussion at the Harvard Graduate School of Education (HGSE), the activist and advocate for the poor and disadvantaged called for the nation to raise its collective voice against violence in society.

Educational institutions “should not become armed bastions, with more guns in schools. Teachers need to teach,” said Edelman. Violence “is in our communities, it’s in our streets, it’s in our homes. It’s everywhere, and we need to deal with it as a broader cultural issue that affects all Americans.”

The solution requires an approach that brings communities, ministers, parents, grandparents, corporations, and in particular students and young people into the conversation, the panelists agreed. Edelman was joined by John Merrow, education correspondent for the PBS “NewsHour” and president of Learning Matters; Elaine Zimmerman, executive director of the Connecticut Commission on Children; and Kathleen McCartney, dean of HGSE, for the hourlong discussion.

“The youth voice is the missing voice, and that’s the future,” said Zimmerman, whose organization helped students, teachers, parents, and community members cope with the mass shooting in Newtown, Conn., last December, when 20 children and six staff members were killed at Sandy Hook Elementary School.

The speakers also said there was a need to combat violence in the entertainment industry. Hollywood executives market increasingly gruesome movies to younger and younger audiences, they said, and video game producers push the limits with graphic content. Merrow suggested involving young people in video production as a way to help them counter the barrage of violent products marketed directly to them.

“The best antidote to that would be to have the kids in production,” he said. “Why not challenge [students] to make public service announcements about being nice to each other. … Get them involved in making stuff. Then they aren’t just going to be mindlessly playing those games.”

“We’ve got to stop this glorification and romanticism of guns,” added Edelman. “We’ve got to de-normalize violence and its mass production at every level we can.”

Edelman, who is also president of her children’s group, called for development of a generation of young leaders, modeled after Martin Luther King Jr., who can energize an anti-violence civil rights movement based on massive action.

“That’s where we’ve got to get to. … Create those young leaders, give them the skills and the backup. Teach them their history. There’s enough to complain about. We just need to not wait for Dr. King to come back. We need to understand he’s not, we’re it, and [we have] to go on out there and do it. That is what the next five years has to be about, and I hope that we will all be part of it.”

Before the discussion, McCartney presented Edelman with the HGSE Medal of Impact. The School’s highest award recognizes people making a lasting difference in education. It honors “those who have a transformative effect on the sector through their entrepreneurial spirit, innovative strategies, collaborative work, and superior leadership.”