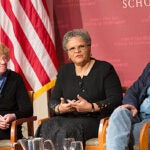 Hope ahead, hell behind

For almost anyone, the sight of a well pump clogged with sediment would mean bad news. For the residents of Pinalito, Dominican Republic, it meant the risk of drinking bacteria-contaminated water from the river. For the Harvard College Engineers Without Borders (HCEWB), however, it meant the chance to brainstorm a slew of solutions — and determine which would work best.

In January, a team of students led by Casey Grun ’14 and Tunde Demuren ’15  ventured to Pinalito for nine days to learn about the village’s resources and needs. They noticed that the pump had been installed improperly, letting water out and sediment in, and the original contractor was long gone.

Pinalito is a community so rural it doesn’t show up on Google Earth, and has only 20 to 30 permanent households. The economy is based on agriculture, and the residents have an average income of only about $7.50 a day. Not only did the 100 villagers need access to clean water, but they needed a long-term, sustainable solution they could own and maintain themselves.

HCEWB, the Harvard chapter of the humanitarian organization Engineers Without Borders USA, contributes to environmentally sound and economically sustainable engineering projects all over the world, while promoting global consciousness on campus. Supported in part by a Nectar grant from the Harvard School of Engineering and Applied Sciences (SEAS), the group also develops programming and builds mentoring relationships among engineers and students in the Cambridge area.

HCEWB had first traveled to the Dominican Republic in 2007 on the suggestion of the Constanza Medical Mission, a Massachusetts-based Catholic charity that was treating many waterborne illnesses there and seeking an engineering-based solution to the problem.

The Harvard group began working to improve the contaminated water supply in the village of Tireo Abajo, just outside the small city of Constanza. By the summer of 2011, it had distributed point-of-use water filters throughout the community. The students were then referred to nearby Pinalito, visiting last March and again in January to assess the community’s general needs.

In one busy week, the group conducted a detailed land survey with 260 points of interest to create a regional map using GIS, enabling an in-depth analysis of the geography. The team also tested the quality of the community’s existing water sources, including the river, mountain springs, and tinitas, sand-enclosed water pits from which the villagers collected most of their water. The team measured arsenic levels, turbidity, and nitrate levels, as well as fecal coliform bacteria and E. coli in these sources, suspecting that the waterborne diseases prevalent in the community came from its drinking water.

The team found that the sandy tinitas actually filtered out a good portion of the bacteria in the water. The mountain spring water was the cleanest, but also harder for the villagers to access. The residents used this initial data to decide where they should collect water in the short term, until the pump was fixed or replaced. Some families also began using biosand filters in their homes.

For the students working on the project, said Grun, “The biggest challenge is the constant tension between urgency and prudence. The natural inclination is to want to do something as quickly as possible, but we want our solution to be effective and sustainable — and this requires time to do a careful analysis and design.”

Speaking Spanish, the Harvard students also took time to teach lessons on water quality to children ages 6 to 13at three schools. The team designed and presented a curriculum covering water purification and good sanitation, and demonstrated the use of Petrifilms to compare bacteria compositions in different water sources. The Harvard students even created a comic book chronicling the adventures of Señor Agua, or “Water Man,” against a villain who contaminates water sources. A forum teaching water treatment and sanitation included parents in the educational initiative.

Throughout the process, HCEWB ensured there was open communication with the community.

“Though the Harvard students may be separated geographically and culturally from Pinalito during our academic semesters, we really work hard to form deep connections with our local contacts and ensure all decisions are made jointly,” said Grun, who is studying biomedical engineering and computer science.

Before leaving Pinalito, for instance, the Harvard team held a community meeting to explain the results of the water testing and discuss possible solutions to the problem. Together, the participants determined that their most viable options were to dig a well near the river or further uphill, pipe water from a faraway spring, or restore the old, nonfunctional well.

Back in Cambridge, the students are now analyzing the four possible solutions, using the data they previously collected. They regularly call their contacts in the Dominican Republic to check on conditions and get feedback on their proposals.

“It’s been very exciting to work on a real-world problem,” Grun said, “but it’s a weighty responsibility as well. The stakes are higher. Our actions, positive or negative, have a measurable effect on the health and well-being of the residents of Pinalito. This isn’t the case for our exams or problem sets, which makes it both inspiring and intimidating.”

The group has four months before its next trip to evaluate the options and decide the best to implement.

“Today’s largest engineering challenges are in global infrastructure and how this infrastructure can meet the needs of the 7 billion people who live on earth,” said the group’s advisor, Christopher Lombardo, assistant director for Undergraduate Studies in Engineering Sciences at SEAS. “Student groups like Engineers Without Borders provide a mechanism for students to make global contributions during their college education.

“The experience they gain by working on these projects also makes these students highly competitive for employment with companies or institutions that are internationally focused or have offices worldwide,” Lombardo said.