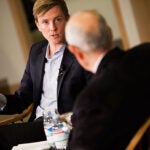 Using new media to save the old

In a shocking move, Pope Benedict XVI announced Monday he would step down at the end of the month, citing age (85) and health issues. Francis Schüssler Fiorenza, a professor of Roman Catholic theological studies at the Divinity School, spoke with the Gazette’s Colleen Walsh about the resignation — the first in six centuries — and possible successors.

GAZETTE: There is no precedent for replacing a living pope in the modern era. How do you think the process will proceed?

FIORENZA: I don’t think the procedure is much different … within nine days, or so many days, the cardinals who are under 80 would be called together by [Cardinal Angelo] Sodano, who is the head of the College of Cardinals, and then they have a vote for the new pope. So in a sense, the procedure for electing a new pope hasn’t changed. What some of us are speculating is: [Pope Benedict XVI] obviously can’t be a part of the conclave because he is over age, so will he try indirectly to influence who he likes or doesn’t like as a successor? That is the interesting question.

GAZETTE: Is there anyone you think he would like to see as his successor?

FIORENZA: That is a difficult question. He has defended Cardinal [Tarcisio] Bertone, his secretary of state, against criticism, but I think he is too old [78] to be considered if they go for a younger person. [Austrian Cardinal Christoph] Schönborn has been a student of his and friend.

GAZETTE: Can you describe the papal conclave process?

FIORENZA: John Paul II [changed the rules] so that after so many votes all you needed was a majority … Benedict changed the rules back to the original rules, and the original rules state you need a two-thirds majority. Now that’s really important. … This means you’ve got to elect someone whom at least two-thirds would agree upon, so if a conservative majority gets 51 percent, then they could have forced [the person] through. … That you’ve got to get someone that two-thirds would agree upon is a good decision.

GAZETTE: Would the cardinals ever select someone from the United States?

GAZETTE: What would it mean if the next pope were not from Europe? How would that impact the influence of the leadership? Would it reflect a real shift in power?

FIORENZA: I do not think it will reflect a shift in power immediately. Several of the names mentioned have appointments in Rome. It will lead more to a cultural change and perhaps in time a power change. Christianity has been identified with Western if not European civilization, especially European colonization. Such an appointment would then be a shift and over time a change.

GAZETTE: Many liberals complain that Benedict was too conservative. How will that reputation affect the selection of the next pope?

FIORENZA: [John Paul II and Benedict XVI] tended to appoint more traditional bishops, and that I think will have an influence. Remember that under Paul VI, Vatican II wanted to deal with the issue of birth control and Paul VI removed it from the council and set up a commission, and then the commission of cardinals came out and recommended that the church change its position on birth control. Then Paul VI disagreed with the commission and said “I refuse to accept this, because to accept this would admit that the previous popes were wrong.” … There were enormous protests [around the] world, of a lot of bishops saying “If you are a Catholic, follow your own conscience.” The papacy under Paul VI was furious, as was John Paul II, so that they often asked bishops if they support the pope on birth control. And … what’s the one thing the American bishops are concerned about? It’s birth control in terms of Obamacare, and they have a very conservative position. So I think the legacy will be that you have a much more conservative episcopacy now than you had, let us say, 50 years ago, and that’s clear in the United States. [Benedict’s legacy] would be to continue John Paul II’s appointing of conservative bishops and ultimately cardinals, and that is going to have an impact on the election, I would assume.

GAZETTE: How important is the Vatican’s relationship with other religions? John Paul II and and Benedict XVI made some inroads there.

FIORENZA: Many felt that Benedict didn’t go far enough, because he was very much concerned about religious relativism, and he was always warning about pluralism. And so the biggest question that they are now facing is where the church is changing. If you look at the United States or you look at Europe, [you see] many marriages that are taking place that [are] “mixed marriages.” I once read statistics that right after World War II, both in the United States and Germany, nine out of 10 Catholics married fellow Catholics. And now [in the United States] … around eight of 10 Catholics are marrying either Protestants [or people from] other religions. And that type of switch is leading to a type of religious pluralism that the church is not used to. … So I think the question of religious pluralism is going to be really important, especially if you get a pope from Asia, where you have more awareness of other world religions.

The Center for the Study of World Religions (CSWR) at Harvard Divinity School will host an open discussion on the resignation of Pope Benedict XVI as part of the center’s “Religion in the News” series. The event will be held Friday (Feb. 15) from noon to 1 p.m. in the CSWR Common Room, 42 Francis Ave., Cambridge. The event is open to Harvard faculty, staff, and students only. Due to limited space and the possibility of high turnout, RSVPs are appreciated. Please contact Lexi Gewertz, agewertz@hds.harvard.edu.