Using new media to save the old 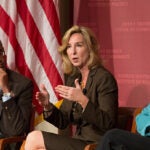 To win elections, get diverse

For most college students wanting to leave their mark on the world, having helped Mark Zuckerberg launch Facebook would be more than enough. But Chris Hughes ’06, who helped to lead the social network’s growth in its early years, now has his sights set on upending a slightly less sexy medium — magazines.

Nine years and a day after he and Zuckerberg took Facebook live from their Kirkland House dorm room, Hughes returned to campus on Tuesday to discuss his latest underdog venture: his plan to reinvigorate the ailing but venerable magazine The New Republic, which he purchased last spring.

“I believe in the power of great writing to shape how we see the world,” Hughes said in a conversation at Harvard Kennedy School (HKS) sponsored by the Joan Shorenstein Center on the Press, Politics, and Public Policy. “That sounds incredibly idealistic, and it is lofty, but I’m not ashamed of it.”

Hughes’ idealism has served him well thus far, as he has ventured into new-media startups, national politics, and now traditional publishing.

“Chris Hughes did something counterintuitive all the way along the line,” said the conversation’s moderator, Alex S. Jones, director of the Shorenstein Center and a lecturer in public policy at HKS.

Unlike many tech founders who found overnight success (including Zuckerberg and their fellow roommate, Dustin Moskovitz), Hughes stayed in Cambridge to finish his degree. In 2007, he left his job as Facebook spokesman at the height of the company’s hype to work on social media initiatives for Barack Obama’s presidential campaign, then a long shot. When Hughes assumed majority ownership of The New Republic last March, taking over as publisher and editor in chief, he seemed to be signaling a desire to make his mark in yet another field.

“He has taken this venerable institution [The New Republic], and this venerable profession, journalism, and is looking at them informed by his deep knowledge of digital technology and the digital world,” Jones said.

Last month, the 98-year-old journal of politics and arts launched redesigned versions of its website and biweekly print magazine, reflecting Hughes’ desire to rethink the publication’s advertising structure and its content.

“I think it should be profitable, and I think it’s our challenge to prove to ourselves and to the world that we can find a profitable model,” Hughes said. But “the era when there were sizable profits in this industry is over. … The idea that we’re going to find some business model that is going to return us to the point of prosperity of 20 or 30 years ago is, I think, wishful thinking.”

Hughes’ goal of merely breaking even differs markedly from the current standard held by the owners of most publications, especially newspapers, Jones noted — perhaps shedding a bit of light on why Hughes’s gambit has captured the attention and hopes of so many working journalists and media insiders. (In a December profile, New York magazine suggested Hughes was a self-styled “savior from the future for the institutions of the past.”)

Soundbytes: Smart News in the Age of Social Media

Listen to Chris Hughes in conversation at the Shorenstein Center from Feb. 5, 2012.

“I’m in this for the journalism, not to make a lot of money for myself,” Hughes said, adding that he expects the magazine will reach financial sustainability by 2015.

The magazine is still experimenting with revenue models, he said. His overarching philosophy is that it must adapt to the way people are reading in the 21st century — mostly online, often on mobile devices, and frequently referred through social media links. With that in mind, the new website has enabled features such as bookmarking (allowing a reader to save his or her place in a particular story across web-enabled devices), audio versions of every story, and “marginalia” that can present authors’ footnotes, readers’ comments, and other outlets’ reactions to a piece alongside the story itself.

“You have to create a culture where there’s a high amount of experimentation, where we’re really honest about what’s working and what’s not working thus far,” Hughes said. “That’s not something that’s necessarily been part of the DNA or part of the culture of the world of journalism for a long time, but I think there are a lot of brands and a lot of people out there who are trying to do that.”

Hughes expects the same attitude of the historically liberal magazine’s in-house and freelance reporters, who in his view should be doing more than just filing or even promoting their own stories.

“They’re also responsible for engaging in a dialogue with people on Twitter and on Facebook — people who hate it and people who love it,” he said. “The conversation that continues after a piece is where a lot of the impact can happen.”

Recognizing that the days when “you give us $35 and we give you 20 issues of print” are likely over, Hughes has pushed for enhanced experiences for the magazine’s faithful, including subscriber-only events in major cities.