The Proclamation at Houghton 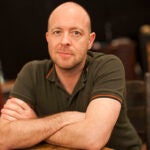 Among the vast holdings at Houghton Library is a signed copy of the Emancipation Proclamation once owned by Charles Sumner, Abraham Lincoln’s confidante and Secretary of State during the Civil War.

A note scrawled in a rough black script at the bottom of the page reads: “President Lincoln: Proclamation. Office copy from the Secretary of State. Charles Sumner.”  The document is part of the library’s extensive archive on Sumner, a Harvard graduate, U.S. senator from Massachusetts, and prominent abolitionist.

Houghton also holds a rare and fragile early version of Lincoln’s order. Measuring three inches long by two inches wide, and four pages in length, the booklet published by Boston industrialist and abolitionist John Murray Forbes in 1863 “is believed to be the first and only contemporary printing of the Proclamation in book form,” said Peter X. Accardo, the library’s coordinator of programs. The booklet’s form serves its function. It was designed to be small enough to “fit in a pocket,” explained Accardo, and be easily distributed by Union troops to freed slaves in the South.

Accardo said abolitionists “flooded the South with these almost ephemeral publications that had a deeply serious purpose,” helping to “shape public opinion, both in the North and in the South.”