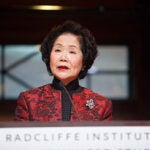 Lessig addressed a capacity crowd in Austin Hall on Feb. 19 at Harvard Law School (HLS) in a lecture titled “Aaron’s Laws: Law and Justice in a Digital Age.” The talk marked Lessig’s appointment as Roy L. Furman Professor of Law and Leadership at the School.

“You don’t need to believe that Aaron was right to see why what the government did here was wrong,” said Lessig. “Even if it was right that [Swartz] committed a crime, still, it was wrong for them to behave so disproportionately in response to that crime.”

Swartz had been charged as a felon for accessing a computer network at the Massachusetts Institute of Technology (MIT) in 2010, after he downloaded millions of academic articles from the nonprofit, online storage service JSTOR. He was facing a trial in April where a conviction could have resulted in a lengthy jail term and more than $1 million in fines. Swartz committed suicide in January.

JSTOR had dropped its case against Swartz, but the federal government was pressing charges of violating the Computer Fraud and Abuse Act, an anti-hacking law that makes unauthorized access to a computer network a federal offense.

During his talk, Lessig called for a closer examination of what constitutes major and minor violations in cyberspace. He praised “Aaron’s Law,” a bill proposed by U.S. Rep. Zoe Lofgren of California in the wake of Swartz’s death that would limit the scope of the computer fraud act, but Lessig argued that the reform doesn’t go far enough. “It’s a “valuable piece of legislation,” he said, but “fundamentally incomplete.”

In addition to amending the fraud act, Lessig said we need a statute to eliminate “dumb copyright laws,” including protections that benefit only a select, privileged few, as well as a law to end the “corruption” in the system that allows such copyright laws to exist.

Lessig also called for a law to end “the obliviousness that we lead our daily life with.”

“We must find a way to inspire in all of us a recognition …  of when these institutions find their way into this corner, that we have the obligation as citizens to pull them back.”

Lessig, who was a friend of Swartz, initially asked that his appointment lecture be postponed, but changed his mind, and chose to dedicate his remarks to his collaborator, colleague, and “mentor.”

“When a law professor is given a ‘chair,’ she/he gives a lecture in honor of the honor,” Lessig wrote on his blog last month. “I am the Roy L. Furman Professor of Law and Leadership. … After Aaron’s death, I asked the dean to let me reschedule the lecture. But after some more thought, I’ve decided to make the lecture about Aaron, and about how we need to honor his work.”

That work involved a hefty list of accomplishments by the 26-year-old Swartz, who was called a “genius,” “child prodigy,” and “computer whiz-kid.” When he was 13, his research helped to lay the groundwork for Wikipedia. At 14, Swartz helped to design RSS, a revolutionary way to access information online. When he was 15, he helped to build Creative Commons, the nonprofit copyright system co-founded by Lessig. Swartz was also one of the architects of the popular, crowd-sourced news website Reddit. Later he gravitated to social justice work, largely devoting himself to the cause of making information on the Internet as freely available as possible. Sometimes, he acknowledged, that work meant breaking rules.

“This is a serious problem, that the vast majority of the planet doesn’t have access to our accumulated scientific knowledge, and I think it might be worth a little shell scripting and breaking a couple of rules to solve that problem,” Swartz said during a 2010 talk at the University of Illinois.

Lessig argued that such broken rules shouldn’t be equated with crimes of terrorists, or of hackers accessing nuclear secrets or credit card data. Along with being a social and political activist, as well as a hacker with a cause, Swartz was a citizen, said Lessig, “who felt a moral obligation to do what he believed was right. If he was guilty here, it was because he acted on that view of what was right. And we need to act to respect that act of citizenship, to think beyond what Aaron did, to think beyond what was done to him, to think about those ideals he gave everything in his life to, and to make those ideals the law.”

Lessig recalled how Swartz inspired him to turn his attention in 2007 from the Internet and copyright to political and institutional corruption. “Like the very best teachers, he taught by asking … [he] forced you to think of who you were, and what you believed in.”

Aaron's Laws: Law and Justice in a Digital Age

Lawrence Lessig marked his appointment as Roy L. Furman Professor of Law and Leadership at Harvard Law School with a lecture that honored the memory and work of Aaron Swartz, the programmer and activist who took his own life on Jan. 11, 2013 at the age of 26.