Hope ahead, hell behind 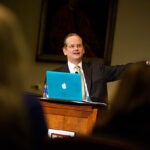 Panel examines battered Haiti as it continues to recover from quake

At dusk on Tuesday, an hour before a Harvard Kennedy School (HKS) panel on life in Haiti since its devastating 2010 earthquake, a long line of audience hopefuls stretched down JFK Street. It was the kind of queue you might see at a movie premiere.

And there was a movie star at the Institute of Politics (IOP), where the guests are usually pundits, politicians, and policymakers.

Three years ago, a 7.0-magnitude quake struck Haiti and was followed by a popping string of 52 aftershocks. The quake affected 3 million people, a third of Haiti’s population. At least 300,000 were killed, an equal number injured, and a million displaced.

With Penn on stage at the John F. Kennedy Jr. Forum were Michèle Pierre-Louis, a former Haitian prime minister (2008-2009) and an IOP fellow in 2010, and Army Lt. Gen. P.K. “Ken” Keen. In the aftermath of the quake, he was commander of Joint Task Force Haiti — Operation Unified Response.

Moderating the panel was Mary Jo Bane, the Thornton Bradshaw Professor of Public Policy and Management at HKS.

Divergent as their roles were in post-earthquake Haiti, the panelists delivered at least one common message: Hell may be behind for Haiti, and hope may be ahead, but true recovery will take a very long time — “generations,” suggested Keen. Penn was more optimistic. “It’s coming in 15 years,” he told the capacity crowd. “I’ll see you there.”

“There is reason for hope,” offered a cautious Pierre-Louis, who praised the resilience and dignity of the Haitian people, “but there is still much to be done.” The relief phase took a year, she said. Recovery is ongoing, and reconstruction has begun.

“Surely,” suggested Keen, “less than an hour from Miami, we should be able to solve the historical problems that have plagued Haiti for decades.”

But “a sense of frustration” remains, said Pierre-Louis. She named a few items on a long list of national needs: security, qualified civil servants, the rule of law, and a working system of justice. “There is an issue of impunity in the country,” said Pierre-Louis, because the court system favors elites. “You can corrupt any judge with very little money.”

Add to Haiti’s national to-do list some way to determine property rights, she said. In a country where so much property was destroyed, so little ownership — even beforehand — has been officially acknowledged, creating a legal and social tangle. Now banks are making that worse, she said, by refusing to lend to those whose houses were destroyed.

Then there is the issue of jobs, which are lacking in a nation of would-be entrepreneurs. “There’s no begging culture,” said Penn of Haitians. “They ask for jobs.”

Pierre-Louis saw the same need. Haiti’s middle class has already fled and lives abroad, she said, and most of those left behind are desperate to get out. So there is a need “to help young people project themselves into the future of the country,” she said. A teacher now, Pierre-Louis said she had recently asked a student: If you had a visa, would you leave? “Madam,” the student replied, “even without a visa.”

That, said the former prime minister, “is tragic.”

Meanwhile, although Haitians have resilience, that trait bumps up against incoherent international aid, delays in assistance, and a national government struggling to keep up with aid requirements, plans, and expectations. “The impact (of assistance) would be so much greater if there was more coordination,” said Pierre-Louis. Meanwhile, she added, “a lot of promises … have not been kept.”

Penn echoed the idea of Haitian resilience, using as a prime example the peaceful transfer of power after the earthquake from one civil government to another. Haiti won’t make it? “There are significant events,” said Penn, “that tell us otherwise.”

But the two-time Oscar winner complained that resilience, hope, and progress are rarely reported by visiting journalists, a class of actors on the Haitian stage that drew his ire throughout the panel session. He called on the media to have more perspective, to report on “not the last three [years] or the next two,” but on the 15 years it will take for the nation to recover.

“The truth is not necessarily a bad news story,” said Penn. “It’s a real news story.”

Keen’s sense of a recovery horizon is “generations,” but in the meantime the island nation’s most pressing problem is civil peace and safety. “Without solving the security aspect in Haiti, everything else becomes more difficult,” he said. A first step, he suggested, would be for the United Nations to follow through on its promise to retrain and reform the national police force.

Keen was in Haiti the afternoon that the earthquake hit. That morning, while on a mission to assess the country’s readiness for the coming hurricane season, he strolled through Cité Soleil, an impoverished and edgy section of Port-au-Prince, where just a year before he only had felt safe wearing a helmet and body armor, accompanied by a security detail. “There was optimism in the air,” said Keen, “even in a country that was struggling as Haiti was.”

Before the quake, Pierre-Louis had the same sense of Haiti being on the verge of better days. “Then bang,” she said, “the earthquake happened.”

Now civil resentment is building, and it may soon reach a boiling point, she said. “The sense of frustration is dangerous.”

The Haitian government alone is not to blame for what can seem like an incoherent relief effort, said Pierre-Louis. Foreign governments impose road maps to mark aid progress, parcel out money in small increments, and often work without consulting Haitian authorities. “The government itself,” she said, “has no grip on what’s going on.”

Penn prefers working directly with the government. “We go to the government and say: What do you need now?” he said. Dealing with on-the-ground reality also helps, like tackling the “double-head-high piles of rubble” and roads cratered with 8-foot holes, said Penn. “Be very decisive about the five or six things that you are going to get done.”

That requires working at the community level, he said, with the de facto governments that actually run things, whether on the scale of a camp or a neighborhood. Among his role models for collaborative relief action, Penn said, is Partners In Health, the Boston-based group with an international health care mission for the poor. Its flagship operation started in Haiti 25 years ago.

Penn said his initial impulse for aid to Haiti was to distribute intravenous pain medications “for a couple of weeks,” but he was soon captivated by the Haitian people and impressed with the vast scale of the help they needed. Early on, he said, an American military commander told him, “As long as you’re productive, you can stay. Otherwise, get out.”

Today, J/P Haitian Relief Organization employs 380 people — only 15 of them, Penn says, not Haitian. One main focus is shelter. His group has helped to relocate 40,000 of 55,000 residents of one camp, for instance, and the rest will be resettled by the end of this year. “We learned quickly,” he said, “that tent was a bad place and home was a good place.”

Penn’s manner of aid — local, sustainable, rapid, transferable — struck a chord with Pierre-Louis too. “There is a problem,” she said of some relief efforts, in “not taking into consideration what the Haitian people want.”