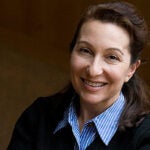 How to sidestep sequestration

David Keene, president of the National Rifle Association, offered up his views at the John F. Kennedy Jr. Forum, a venue sponsored by the Institute of Politics (IOP). Engaging with him onstage was John King, CNN’s chief national correspondent and an IOP Fellow this semester. (Keene himself was an IOP fellow in 1976.)

The venue? Stacked to the rafters, and primed for the sharp round of questioning after the 20-minute opening conversation.

Most of those minutes went to Keene. His position:

King asked: What about classes of weapons not foreseen by the Founding Fathers “in the age of muskets”?


Soundbytes: A Conversation with David Keene and John King

National Rifle Association President David Keene joined CNN Chief National Correspondent John King for a conversation on gun control.  After a 30-minute interview which focused mainly on gun control policy, King turned the questioning over to audience members who re-directed the conversation to the marked increase in school shootings over the last decade.

Citizens are rightly banned from owning most military-class firearms and weapons systems, said Keene. But AR-15 rifles, and firearms like them, are “widely owned and commonly used,” he said — making them legal to possess according to the findings of District of Columbia v. Heller, a 2008 Supreme Court decision. Confiscation schemes, floated by some anti-gun advocates and widely feared by gun advocates, are unlikely, added Keene.

He called the AR-15 “the most popular long arm in the United States,” used widely for training, competition, and home defense, and “rarely used for illegal purposes.” More people are “beaten to death” every year than “killed by long arms,” said Keene.

The 157 guns that would be banned by a renewed “assault weapons ban” proposed in the Senate, he said, were chosen because of the way they look and not the way they function. “You don’t make public policy that way,” said Keene, pointing to recent New York gun legislation that took cosmetics into account. “You look more carefully than that.”

Current laws would work if they were enforced, Keene said. He said Chicago has a high murder rate involving firearms, and some of the nation’s toughest gun laws, but it ranks 89th among localities in actually prosecuting gun crime.

From the audience, a questioner asked: Why would any American need to own a military-style rifle with a capacity of 20 or 30 rounds in one magazine? “They enjoy them,” said Keene, citing the long arm’s low recoil and good ergonomics for handicapped shooters.

Sandy Hook and other recent mass shootings came up. Keene defended the NRA’s recent call for an armed presence at schools — a reality already, he said, at 30,000 of the nation’s 135,000 public schools. “We protect jewelry stores, we protect banks,” he said. “Why don’t we protect children?”

The NRA president rejected the idea that the organization is simply a lobbying arm. Only 12 percent of its budget is set aside for advocacy, he said, and the rest goes to expenses like training, education, and matches. Nor is the NRA a megaphone for the gun industry, said Keene; only 4 percent of its revenue comes from industry sources. “We don’t represent the firearms industry,” he said. “We represent the consumer.”

One questioner raised another common issue: In a gun debate dominated by talk of assault rifles, what about illegal handguns, which are seemingly ubiquitous in urban crime?

Keene said again: Prosecute offenders, who too often — in Chicago and elsewhere — get off easy because authorities denigrate the idea of chasing small-time offenders. “You start with the guppies,” said Keene. “Then you get the sharks.”

Earlier in the day, about 80 students listened to a leading gun control advocate deliver a talk at Harvard Law School (HLS), sponsored by the student chapter of the American Constitution Society.

Jonathan E. Lowy ’83, an attorney and director of the Legal Action Project at the Brady Center to Prevent Gun Violence, was originally slated to be in conversation with former NRA President Sandra Froman, J.D. ’74, who canceled her appearance. Froman spoke at HLS in 2007, calling the Second Amendment “the one right that protects all the others.”

Lowy outlined an argument for the Brady Center’s basic message — having a lot of guns leads to a lot of violence.

In the past 25 years, he said, 2.5 million Americans have been shot in crimes, suicides, and by accident — equivalent to all the residents of Boston and Cambridge combined. About 750,000 have died.

And every year, about 30,000 Americans are killed in firearms incidents, more people than in every School at Harvard, said Lowy. “No other industrialized nation tolerates such slaughter of its citizens by guns.”

The rate of gun homicides in the United States is 20 times higher than 22 equivalent developed countries combined, he said, yet crime rates among the same countries are equivalent. “It’s not that Americans are more criminal and violent,” said Lowy, who has litigated for the Brady Campaign to Prevent Gun Violence for 16 years, it’s that the availability of firearms makes violent crime more fatal in America.

It took only one mass shooting in Australia and another in the U.K. to prompt stricter gun laws, he said, yet stricter laws failed to materialize after many parallel incidents in the United States — more than 60 since the 1999 Columbine incident alone.

But Lowy is optimistic Congress will soon stiffen at least some U.S. gun laws, beginning with requiring better background checks.

Lowy said the Brady Center’s recommendations include universalizing criminal background checks for gun buyers, since only 60 percent of such purchases are made through federally licensed dealers, and limit the number of guns a person can buy at one time, because large-scale straw purchases enable illegal street sales.

Lowy would also like to see firearms made beholden to U.S. consumer safety protections, and the Bureau of Alcohol, Tobacco, Firearms, and Explosives freed from Congressional restrictions such as limiting federal agents to making only one spot check per gun dealer per year.

Finally, said Lowy, gun data should be made available through the Freedom of Information Act.