To win elections, get diverse 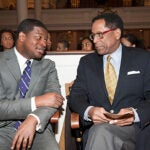 Republican leaders outline how party can rebound from losses

Republicans must accept a broader definition of their party, finding a way to embrace young voters, women, African-Americans, Hispanics, Asians, and environmentalists, if they are to avoid repeating the losses of the 2012 election, panelists said Tuesday during an Institute of Politics (IOP) forum at the Harvard Kennedy School.

“Our tone was wrong in recent years,” said Karen Hughes, a top aide to former President George W. Bush and author of the phrase “compassionate conservatism” for her former boss.  “Conservative philosophy can be optimistic and hopeful.”

But Ana Navarro, national Hispanic co-chair for John Huntsman’s 2012 presidential campaign, was more blunt: “We had bad outreach, a bad message, and bad messengers. We should make 2012 a manual of what not to do.”

For progress, Navarro said the party must shift from its perceived resistance to change on issues. “Young people feel deeply about gay marriage, access to contraception, and they also care about the environment,” she said. “There are any number of issues we missed out on without changing our position.”

The prescriptions for improvement ranged widely but hewed to a theme of inclusion and dynamism.

Kerry Healey ’82, a former Massachusetts lieutenant governor, said there is a tangible sign of a brighter future in the commonwealth with Gabriel Gomez, a former Navy Seal and Harvard Business School graduate who may run for the U.S. Senate seat that John Kerry vacated to become secretary of state.  “We’ll have a wonderful candidate who will represent the new face of the Republican Party in the Northeast,” said Healey, a top adviser to Mitt Romney’s recent presidential campaign.

Healey, who was secretary of the Harvard Republicans as an undergraduate in 1978 — when the club numbered 12 members compared with the current 100 — was also an IOP fellow in spring ’07. She said the party has to be more accepting, and must rebuff attempts to subject each member to a litmus test of approved conservatism.

“If you consider yourself a conservative, we think you’re a conservative,” she said. The party likewise needs to find a way to welcome moderate Washington officeholders, whose ranks are diminishing to the point of extinction with recent departures from Congress.

“There has been a glass ceiling in our party for many years above which they could not rise,” said Healey, currently a state committeewoman to the national party. “We need to come together not under a big tent but as a coalition of conservatives,” to create “a winning strategy to bring us back.”

Several panelists, including Ron Christie, a White House adviser to the younger Bush and an IOP fellow in 2011, said the party has to improve its use of technology to reach people and get out the vote.

Navarro, a CNN contributor who also was an adviser on Hispanic issues to John McCain’s 2008 presidential campaign, quipped: “We seem to have a lot of nerds in the Republican Party, but not enough geeks.”

What is truly unsustainable, said John Murray, a former aide to House Majority Leader Eric Cantor who now heads a super PAC to promote conservative candidates and policies, is the amount of money being spent on losing candidates.

“We invest a lot of money in guys who can’t win,” said Murray, who heads the Young Guns Network, which was started by Cantor. “If you are going to engage in a House race, you need to find someone who fits his district,” he said. “I cannot go to the people who put up the money and say I blew the budget on a guy who had no chance of winning.”

The problem, he said, is that funders are intent on furthering their political agendas   and back candidates who share them even if they are not in winnable races. The Young Guns are taking a different approach by vetting promising candidates rather than supporting whoever feels entitled to run because it’s his or her turn. “We have begun to systematically look at people who look different.”

A member of the audience who has been active in the Harvard Republican Club asked why Republicans are scarce in faculties on elite campuses.

Christie, who has served as an adjunct professor at the George Washington University’s Graduate School of Political Management, took the point and expanded on it, saying, “We need to get involved in academia and deal with the hostility that is out there.”

The Future of the Republican Party

Watch the full panel discussion from the Institute of Politics