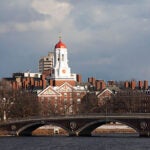 Hochschild, Lepore, and Dowling to participate

How will this generation shape issues of race in society? What can the retina tells us about brain functions? What’s the meaning of life?

These are some of the questions Professors John Dowling, Jennifer Hochschild, and Jill Lepore have investigated, if not answered, in their books, questions they will further explore, and raise with students, through a series of book talks to be held in the Widener Library rotunda beginning this week.

“Working with the UC and HCL, I wanted to create additional opportunities outside the classroom for undergraduates to hear directly from — and to engage with — Harvard faculty members about their research and scholarship,” said Hammonds, the Barbara Gutmann Rosenkrantz Professor of the History of Science and of African and African American Studies.

Hochschild, the Henry LaBarre Jayne Professor of Government and professor of African and African-American studies, will present the first book talk on Wednesday, beginning at 6 p.m. The talk is open to anyone with a Harvard ID; seating is first come, first served.

“When I was a student, I liked seeing my faculty and interacting with them in a different context. I think there is something very interesting about that,” said Hochschild. “And for me, this is a setting where I can be a little less professorial, and maybe ask different questions and give the students, the audience, a little more room to think about the possible answers.”

Hochschild will discuss her book “Creating a New Racial Order: How Immigration, Multiracialism, Genomics, and the Young Can Remake Race in America,” which she co-authored with Vesla Weaver and Traci Burch. The book analyzes changes in the U.S. racial order since the late 20th century.

Today’s young people are not witnesses to or participants in civil rights struggles such as those of the 1950s and ’60s, as their parents and grandparents were. However, that does not mean they live in a post-racial society, she said.

“The crucial question is, if we are not in that [civil rights] era, which we profoundly are not, and we are not in a post-racial society, then where are we?” she asked. “Race continues to matter, inequality persists, and while the old forms of inequality have been wiped out, if you had to describe what would the racial order look like in the next decade, what are the most salient characteristics? The book tries to look at that through immigration, multiracialism, genomics, and the young generation.”

Lepore, the David Woods Kemper ’41 Professor of American History, Harvard College professor, and chair of Harvard’s history and literature program, has followed the echo of the age-old question: What is the meaning of life?

“Most questions about life and death have no answers: What does it mean? What happens when we die?” Lepore, author of “The Mansion of Happiness: A History of Life and Death,” said. “No one has ever answered these questions and no one ever will, but people try.”

Her “Mansion” talk April 10 at Widener will include a discussion of the various changes to the board game The Game of Life over the years and how those changes reflect societal currents.

Variations of The Game of Life date to the 18th century. Milton Bradley, a Harvard dropout, popularized the Checkered Game of Life in the U.S. in 1860. Then the game was about vice, virtue, and the pursuit of happiness, Lepore said. But by the time the centennial version of the game was released, its focus had changed dramatically.

“The centennial version of the game bore almost no resemblance to the original. It was about paychecks, retirement homes, and medical bills, and if you are lucky you retire at Millionaire Acres while the rest of us go to the poorhouse,” Lepore said. “Games are little time capsules, and the history of games tells a story about the history of ideas about life and death, about questions people have asked and answers they have come up with. What really strikes me is how secularized the game has become over the years.”

Lepore said the book talk gives her a chance to discuss her own interests and research, something she wouldn’t normally do in a classroom.

“I’m not going to say to a class, ‘Read my book.’ But this gives us as professors a chance to discuss specific areas that are of interest to us.”

Dowling, the Llura and Gordon Gund Professor of Neuroscience and professor of ophthalmology, has spent his career studying the retina and will discuss his latest research on diseases of the eye and the impact on vision on March 5.

“In science, on the cellular and molecular side of things, there have not been many books written, and I have been trying to change that a bit,” said Dowling, who recently published a revision of his 1987 book, “The Retina: An Approachable Part of the Brain.” “When I first started writing, I thought how could I write a book that is hundreds of pages long. But I find writing quite gratifying, especially as it pertains to my research, and that is something I want to share.”