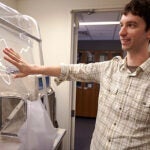 Go with your gut

Not all medical problems can be solved through health care, former Medicare and Medicaid Administrator Donald Berwick said Tuesday, stressing that a commitment to quality improvement and a willingness to look at underlying social problems are keys to better outcomes.

“You can’t ask a kid to be healthy and exercise if he can’t safely stand on the front porch, never mind run down the street,” said Berwick, a lecturer at Harvard Medical School (HMS) who is weighing a run for governor in Massachusetts.

Berwick, appearing in a guest taping of the Harvard School of Public Health’s (HSPH) Voices from the Field program, shared insights from years of working on health care issues. The session, sponsored by HSPH’s Division of Policy Translation and Leadership Development, was hosted by John McDonough, professor of the practice of public health and director of the Center for Public Health Leadership.

Berwick earned a medical degree from HMS and a master’s from Harvard Kennedy School (HKS). It was the exposure he received at HKS to operations research, decision theory, and other subjects outside his medical education that he said “gave me new glasses” through which to view health care.

Early efforts to analyze health care quality while at the Harvard Community Health Plan in the 1980s often met with resistance, Berwick said. The rates of problems at birth, waiting times, and complications from surgery were steady, and, though he felt the rates could be improved, people were annoyed with his metrics and suggestions for reforms.

A key moment, he said, came when he called the National Aeronautics and Space Administration (NASA) out of the blue, thinking that its forays into space demanded an everyday commitment to improved quality from which he could learn. By coincidence, the person who answered the phone was the head of quality. He flew up from Washington and spent four hours talking about NASA’s quality control practices.

That presentation, Berwick said, opened his eyes to what could be done if an organization’s leadership was committed to improvement, with that goal part of the everyday job. The result was the National Demonstration Project on Quality Improvement in Health Care, which matched physicians with authorities on quality improvement, like those at NASA.

Another key moment came in the mid-1990s, Berwick said, in a conversation with Tom Nolan, a senior fellow at the nonprofit that Berwick had founded, the Institute for Healthcare Improvement. Nolan told him that his focus on tools to improve an organization was misguided and that what was really needed was an organizational commitment, from leadership on down, that would transform an organization.

The result was Triple Aim, which worked to link better medical care, better health of patients, and lower cost. The focus on cost as a quality of health care, which is as important as the error rate and patient satisfaction, was an important change, Berwick said.

In 2010, Berwick was tapped by President Barack Obama to head the Centers for Medicare and Medicaid Services, the federal agency that oversees the two programs that pay for health care for most of the nation’s elderly and poor. Berwick’s ability to reform the organization was constrained by political considerations and the criticism he came under for comments on health care rationing. Berwick focused on improving internal management at the centers, breaking down internal boundaries, and instilling a commitment to quality improvement.

Berwick said he is considering a run for governor because his time in Washington convinced him of the power of government to improve people’s lives. With nearly universal health coverage already in place in Massachusetts, a focus on driving down costs, if successful, could show the rest of the country how to better manage care sustainably, Berwick said. Just one state having breakthrough success like that could change the country, Berwick said.

Berwick ended the session by offering advice to students, telling them that an organization’s values matter, that teamwork is crucial to getting things done, and that it is most important in working toward improved health care to focus on the patient.

“In health care now, it’s crucial that you focus on the patient,” said Berwick. “The need, the social need is your compass.”