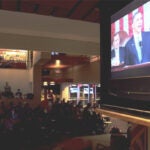 How the big speech fared

Students and fellows packed the John F. Kennedy Jr. Forum on Tuesday, just before the State of the Union address, for a screening of the award-winning documentary “The House I Live In.” Following the screening, there was a Q-and-A with writer-director Eugene Jarecki and Professor Charles J. Ogletree, who is interviewed in the film.

Produced by Hollywood notables such as Danny Glover and Brad Pitt, “House” is a riveting look at many aspects of the war on drugs. Jarecki has taken the film to the streets, with screenings in churches and community centers across the country. His goal is to get his message to where people need to hear it, he said, so after a showing in Roxbury on Monday, he brought it to the Kennedy School.

During the screening, the audience gasped and laughed, sighed and choked up. When it was over, Jarecki, kicking off the Q-and-A, was blunt: “Capitalism in its form that we are seeing in the United States right now is an enemy to democracy.”

Ogletree, the Jesse Climenko Professor of Law and director of the Charles Hamilton Houston Institute for Race and Justice, was on hand to answer questions because, he said, it’s important “to make people understand what has happened the last few decades,” and that the war on drugs and mass incarceration are problems “affecting every community.”

The drug war’s “industrial inhumanities,” said Jarecki, do have a solution: an end to the war on drugs.

Jarecki and Ogletree both hit one word like a drum throughout the conversation. “Treatment,” they insisted, should replace the drug war model. Treatment, they said, would make drugs a public health problem, rather than an issue handled by law enforcement.

“Treatment is not our No. 1 goal, but it has to be,” said Ogletree. “We have to start that dialogue here. They [drug users] are people too.” He also called for an end to mandatory minimum sentencing laws for drug defendants.

Jarecki took care, in the film and during the Q-and-A, to describe the issue not as one of race, but class.

The drug war “is not on anyone’s agenda,” said Ogletree, adding that President Obama probably wouldn’t mention it during his State of the Union address (he didn’t).

“We have to start right here, right now. [We’ve got] to stop this incredible use and misuse of power that has millions of people in jail and going to jail.”