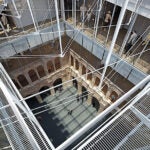 Only a handful of Emily Dickinson’s poems were published during her lifetime, and even shortly after her death, in 1886, only selected works appeared, giving the world a narrow view of the prolific poet’s work.

“Correspondence in our files shows that while the acquisition of the Dickinson Collection was under negotiation, the need for a scholarly edition of Dickinson’s poems was an important argument in its favor,” said Leslie Morris, curator of modern books and manuscripts at Houghton Library.  “After the collection was here, Houghton worked closely with Harvard University Press, assisting in the production of the first scholarly editions by providing space and other assistance for editor Thomas Johnson to work extensively with the manuscripts. Five years later, that work was published by Harvard University Press. That’s only one of several collaborations between the Press and Houghton, and the University as a whole.”

This year marks HUP’s 100th anniversary. Houghton Library is hosting an exhibition of HUP publications, correspondence, and other materials as part of a yearlong celebration.

“This really is a fun exhibition,” said HUP Director William Sisler. “People don’t often know or remember the publisher of a book even if it is a book they have read. This exhibit, and the rest of our centennial celebration, is a reminder to people that the press is the major scholarly publisher at one of the world’s top scholarly institutions.”

“The Harvard Keats Collection is the largest, most important Keats collection in the world,” Morris said. “Its presence on campus allows the faculty to work with it closely in their teaching and research.  Like Dickinson, it has produced standard, vetted scholarly editions; an award-winning biography; and admired critical works — all by Harvard faculty, and all published by Harvard University Press.”

HUP has also published the Charles Eliot Norton Lectures, which have featured prominent writers and artists such as T.S. Eliot, Octavio Paz, and Leonard Bernstein.

“There are so many important programs hosted here at Harvard. Given that, and the quality of the faculty, I think the press was just a natural outgrowth of all that activity,” Morris said.

Details in the Houghton exhibition reflect moments in history. Due to rationing and shortages during World War II, HUP books from that period are smaller, and the paper is noticeably thinner.

Looking ahead, HUP is working on a number of digital projects, including interactive versions of the “Dictionary of American Regional English” and the Loeb Classical Library. HUP is also working on making the manuscripts of Dickinson’s poetry, along with transcriptions and annotations from scholarly editions, available in open access on the Web.  And to help mark the anniversary, a special website is displaying excerpts from 100 HUP titles that, taken together, represent the full scope of the thousands of books it has published since its founding.

“A publisher is judged by its books, and through this exhibition people have a chance to see some samples of the books we have published over the last 100 years,” Sisler said.

The exhibition runs through April 20 in Houghton’s Edison and Newman Room.