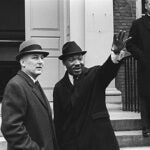 How they have become forces to improve their troubled nations

United Nations Security Council Resolution 1325 says that “civilians, particularly women and children, account for the vast majority of those adversely affected by armed conflict,” and emphasizes “the important role of women in the prevention and resolution of conflicts.”

On Tuesday at a packed John F. Kennedy Jr. Forum at the Institute of Politics at the Harvard Kennedy School (HKS), six female leaders discussed how they’re waging peace and promoting inclusiveness in their war-ravaged nations. Moderator Swanee Hunt, the Eleanor Roosevelt Lecturer in Public Policy and former U.S. ambassador to Austria, facilitated a compelling discussion of how peace is a core women’s issue and why women need roles in resolving national conflicts.

Julia Duncan-Cassell, Liberia’s minister of gender and development, began by explaining how her African nation had suffered years of war and a series of failed peace agreements. Something finally changed, she said, when women got involved.

After “the women of Liberia got to the [negotiating] table,” she said, “we’ve had 10 years of peace.”

Duncan-Cassell said that woman had always possessed power in Liberia, but didn’t exercise it until they became fed up with endless war. She drew good-natured laughter when she said that Liberian women got a seat at the table by refusing to cook, clean, or otherwise serve men in silence.

The Libyan peace and education activist Wafa Bugaighis described how that North African country’s women also had suffered quietly under the dictatorial regime of President Moammar Gadhafi. It was Libyan women who finally broke that Orwellian silence and catalyzed the Libyan revolution, she said. The women of Bugaighis’ hometown, Benghazi, courageously confronted the Gadhafi police state by taking to the streets and chanting “Rise up, Benghazi!” These remarkable women, she said, “were the mothers of martyrs,” their sons having been executed by Gadhafi’s government for criticizing his dictatorship.

“Everyone in the country had the same feeling” of quiet disgust for Gadhafi, said Bugaighis, but the chanting women of Benghazi destroyed that silence.

When women were sidelined after the revolution, Bugaighis and other activists rose up again, creating a coalition “to advocate for more participation of women in decision-making.” The effort succeeded. “We won 33 seats in the national congress,” she said. Despite intermittent violence, “peace will succeed in Libya because women are behind it,” Bugaighis suggested.

The Myanmar peace activist Ja Nan Lahtaw spoke of the uncertainties of her nation’s “semi-democracy” as it haltingly tries to open up to the world. Myanmar’s military-dominated government still practices discrimination against ethnic minorities, said Lahtaw. She discussed the many challenges of waging peace in Myanmar. When Lahtaw negotiated with an ex-general who is now a government minister, she didn’t even know how to address him. She tried “minister,” but he objected. Finally, Lahtaw said, “I called him uncle,” and that worked. (The point also drew appreciative chuckles from the audience.)

Sofi Ospina of Colombia echoed the importance of having women participate in peacemaking. She has become a strong advocate for including women in the peace negotiations between Colombia’s government and the FARC leftist insurgency. Ospina described herself as “an eco-feminist” who is advocating simultaneously “to include women and to protect our natural resources.”

The Syrian human rights activist Rajaa Altalli is helping to prepare her Middle Eastern nation for a future without the repressive regime of President Bashar al-Assad, who she says continues “to terrorize his own people.”

“Women will be the ones to build the bridge” to peace and national reconciliation in Syria, she said.

Sabrina Saqeb, an advocate for the inclusion of women in Afghan politics and society, is equally certain of women’s essential role in peace-building: “War will not end if [women] don’t take a step forward for peace, and peace should be inclusive if it is to be just and long-lasting.”

Bugaighis concluded by praising the empowering impetus of Resolution 1325. “We no longer want women as victims,” she said. “We want them as actors” pursuing peace. The six women, struggling bravely for peace in their nations, embody that inclusive vision.