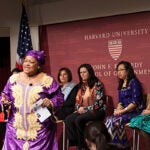 This is the first in a series of articles on Harvard’s sweeping interdisciplinary work at the Kumbh Mela, a religious gathering in India that creates the world’s largest pop-up city.

ALLAHABAD, India — Life at the Kumbh Mela can be heard long before it can be seen.

Two hours before dawn, the nonstop soundtrack of the world’s largest human gathering drifts up to an oasis of tents on a dusty hill overlooking the site of the Hindu festival. At the camp, a group of Harvard professors, students, and researchers fumbles its way into a few rented jeeps in the 5 a.m. darkness. As the fleet of vehicles makes its descent, the narrow road suddenly opens onto a view of the Kumbh Mela, a temporary tent city of millions of faithful Hindus, many of them already making their way to the banks of the Ganges River to bathe in its life-affirming waters.

Normally, a crowd of Westerners wandering through the streets of the Kumbh would draw attention. But when the group arrives at the Ganga, as the sacred river is known, its presence hardly causes a stir.

Still, it’s a curious sight. How did three dozen Harvardians — undergraduates and graduate students, case writers and professors, architects and anthropologists, doctors and documentarians — end up among millions of pilgrims?

Meeting of rivers — and minds

For one week in January, this sacred spot where the Ganges, the Yamuna, and the mythical Saraswati rivers meet has become a spot for a meeting of Harvard minds. An interdisciplinary team spearheaded by the South Asia Institute (SAI) arrived at the Kumbh on Jan. 18 with an ambitious plan to “map the metabolism of the city.”  The confluence of northern India’s holiest rivers holds a special significance for the millions of worshippers who attend the Kumbh, but the Harvard team is just as interested in the tent city that springs up alongside the water.

“This idea of a megacity being set up on a temporary basis for 55 days, it’s just an incredible feat,” said Rahul Mehrotra, one of the project’s leaders and a professor of urban design and planning at the Harvard Graduate School of Design (GSD). “It’s an intersection of the visible, the invisible, the sacred, the profane. Everything is colliding.”

Held every 12 years, the Kumbh Mela in Allahabad is a centuries-old Hindu pilgrimage with origins in the first century CE. The gathering temporarily transforms an empty floodplain into one of the biggest cities in the world.

For much of the year, this area actually is covered by the Ganges. Only in October can the Kumbh Mela’s administrators and planners ascertain the lay of the land that they actually can use for the gathering. (As one guru put it while holding forth in an ashram, “The Ganga gives what she will give.”)

By early January, a temporary city roughly the size of Cambridge has sprung up in the dusty sand to house hundreds of thousands of sadhus, or holy men, and millions of their followers for six weeks.

On the main bathing days, planners expect upwards of 30 million visitors, and such days often draw media coverage for their sheer scale, devotion, and spectacle. But perhaps more impressive is the fact that the regular rhythms of life can exist at the temporary Kumbh, from a steady supply of water and electricity to the building of colorful, organic neighborhoods within each sector.

“Our concern is to look at this in a much larger context, and not look only at the spectacular and the exotic,” said Diana Eck, a professor of comparative religion and Indian studies and Fredric Wertham Professor of Law and Psychiatry in Society, who co-taught a course on the Kumbh with Mehrotra in the fall. “The life of this mela — as a marketplace, as a place of teaching, of entertainment, of evening performances — is something that goes on every day.” (Mela is a Sanskrit word for gathering or marketplace.)

The mela as microcosm

With that in mind, teams of professors, researchers, and students from across Harvard are meeting under one roof at the Kumbh to explore myriad issues related to rapid urbanization, public health, business, and religious expression at this year’s festival. The teams are studying everything from the way marketplaces operate, to the use and types of toilets at the Kumbh, to the allocation of living space within different akharas, or sects.

The mela’s lessons, researchers hope, could be applied in many situations. Public health workers and doctors from Harvard School of Public Health (HSPH) and Harvard Medical School (HMS) see the Kumbh as a model showing how to support mass migrations of people into small areas in the event of a war or natural disaster. Urban planners from GSD, working with Mehrotra, view the gathering as an example of how India — whose smaller cities are expected to grow dramatically in the coming years — can best support the natural, democratic development of communities. A Harvard Business School team dropped in for research, hoping to turn the Kumbh into one of its trademark case studies. And Eck, a leading scholar of India’s pilgrimage tradition, sees the Kumbh as an opportunity to wed Hinduism’s longstanding reverence for the natural environment and its sacred rivers to a growing campaign to clean up the Ganges.

A whirlwind week at the Kumbh makes for a chaotic experience, but one that should prove fruitful for the type of ambitious multidisciplinary work that SAI fosters, said associate director Meena Hewett. As South Asia expands rapidly in both population and influence, Harvard can take the lead in understanding the region, she said. (SAI’s influence has recently grown as well. Under the leadership of director and Harvard Business School Professor Tarun Khanna since 2010, it was recently upgraded from an initiative to an institute within Harvard.)

“I think Harvard has a lot to learn” from South Asia, Hewett said. “One thing you’ll hear from all faculty is the issue of scalability. It’s very easy to transform the lives of one or two individuals. But when you’re working on issues that affect 2 billion people, the impact is huge. The Kumbh Mela is a microcosm of the region.”

Learn more about “Mapping the Kumbh Mela” and follow SAI’s blog on the project here. View a list of resources on the Kumbh Mela, compiled by project co-sponsor the Harvard Global Health Institute here.

Watch the Gazette for more stories on Harvard’s work at the Kumbh Mela in the coming weeks.