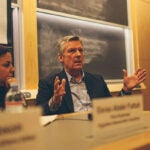 A panel of leading thinkers shared five visions of education’s future during an Askwith Forum on Tuesday at the Harvard Graduate School of Education (HGSE). The scenarios ranged widely, from redefining the function of schools and teachers to adopting learning models that have succeeded in other nations.

Jal Mehta, an assistant professor of education at HGSE, began by bemoaning the results of recent education reforms, noting that “national standards, vouchers, merit pay for teachers, etc., were not making significant changes to the system” or closing stubborn gaps in educational achievement. Four years ago, Mehta started the Futures of School Reform group “to think about different paths for our school system.”

“We did not reach consensus, but developed an array of ideas,” Mehta said before introducing the other Futures of School Reform members on the panel.

Robert Schwartz, Francis Keppel Professor of Practice of Educational Policy and Administration at HGSE, proposed an educational system built on high-performing global models. Schwartz discussed the findings of his research on half a dozen successful systems, including those of Finland and Singapore.

These high-performing systems, Schwartz noted, “focus on teachers, attracting the best talent,” thus enabling them to build their systems upon a strong foundation. They also “focus attention on leaders and leadership,” he said. Moreover, high-performing systems take “an evidence-based approach to developing curriculum,” monitoring what works and sharing those practices through “a culture of collaboration and support.”

HGSE professor of practice Paul Reville’s idea for the future involved broadening the ways in which schools support students. “Schools alone cannot close the achievement gap,” he said. “We need a more robust system that goes beyond schooling” and includes social services. Of course, educators must “optimize what happens in schools,” he said, but “we must eliminate barriers” that keep students from being prepared to learn. Reville called for “more enrichment programs, after school and during summers, to close the gap” between more affluent and less advantaged schoolchildren. He also called for “enhanced collaboration” between schools and human services providers.

Elizabeth City’s big idea was similarly expansive. “We focus too much on schooling, and not enough on learning,” she said. She called for more flexibility in thinking about education, because “most learning is not happening in schools today.” Technology would be part of the solution, said City, executive director of the Doctor of Education Leadership Program at HGSE. And while “schools are really poor at using technology,” she said, “kids aren’t,” and should have “a lot more influence on what and how they learn.”

Frederick Hess, Ed.M.’90, resident scholar and director of education policy studies at the American Enterprise Institute, described how the present educational system is a consequence of hundreds of years of history that may no longer be relevant. He described how democratization, changing expectations, and evolving learning tools have dramatically altered the educational landscape, and called for a new approach.

“We need to unbundle and disassemble all these [accumulated] rules,” he said, including the management of teaching. Teachers should be asked to do less, and allowed to focus on what they do best. This might mean creating other jobs within schools to support the core teaching function, said Hess.

Mehta’s approach was similarly teacher-centered. He advocated teacher development similar to that practiced by doctors, lawyers, and accountants. Mehta even mentioned American Federation of Teachers President Randi Weingarten’s recent call for a bar examination for teachers. The different skill levels among teachers in any particular school “can be fairly criminal,” Mehta said. “We hire less than our most talented people” and expect great results, leading to a downward cycle of frustration. Pointing to Finland, Mehta called for recruitment of highly talented individuals who can propel better student outcomes and more public confidence in education.

Audience members, using handheld devices, were asked which of the five possible futures had “the most potential upside.” They selected Reville’s proposal to “integrate school and social reform” (with 35 percent of votes). Earlier, Reville had referenced the educational system’s “scarcity of resources,” asking, “what will we prioritize” in a climate of deficit-reduction?